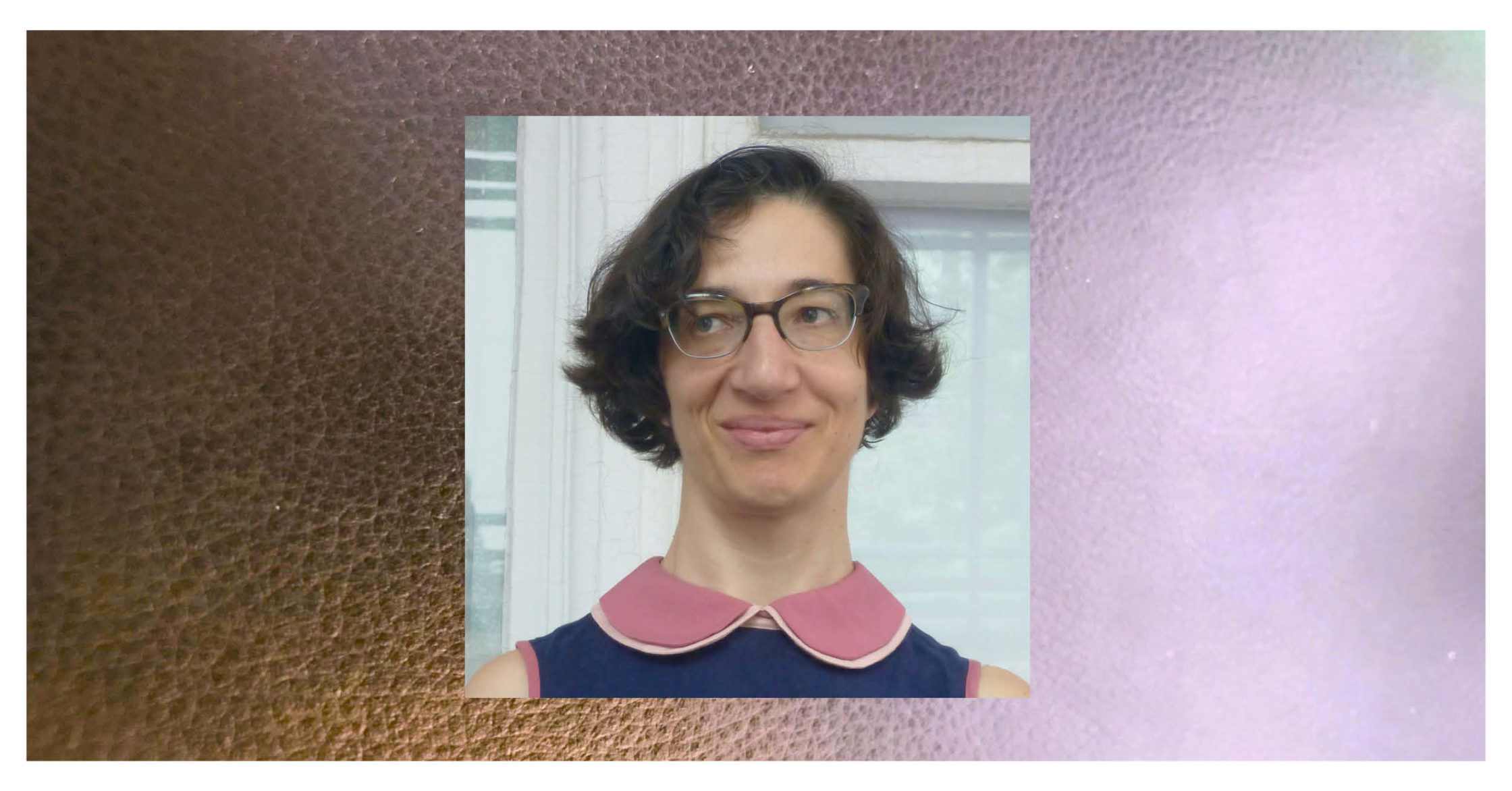 Yeah. There’s a room that would be too cruel to be anyone’s bedroom, but it’s the perfect size for a desk. I’m a ridiculously self-disciplined person, so I’m not tempted to do other things. I actually get dressed to go to work every day—that makes me feel like I’m getting ready to work—and then I don’t leave the house all day.

A working day for me starts at around 8AM or 8:30, then I’ll work until the kids come home, which is anywhere between 3PM and 5PM. I divide my time between teaching and writing: On writing days it’s all I do, on teaching days it’s all I do. I’m very compartmentalized that way. My brain works better when I only have to think about one thing.

How many projects are you working on at one time?

I’m artistically monogamous. I just do the one thing at a time, which is difficult, because then when I’m done with the one thing, I got nothing. And there’s usually a floundering period where I feel panicky, like I’ll never write anything again and I’m a fraud and I don’t know what to do with myself.

So how do you know when you have an idea that’s worth pursuing and committing to?

It just feels substantive. Usually, between books, I do something that’s not a novel and completely unrelated. In the past, it’s been short stories. I’m actually working on a play right now, and that’s my big, different-brained project.

When a story idea comes to me, it already comes with the form I feel it probably needs to inhabit. When there’s something that I know needs time and space, I know it’s a novel. When there’s something more focused and specific, it’s a short story. With this particular thing, just the way it was handling time and the setting, I knew it was inherently theatrical.

Are you reading lots of plays right now, too?

Yeah, I have two people I know who are playwrights, so I had them give me reading lists. And then another magical thing about the city is the Performing Arts Library. They have video of pretty much every show that’s been done in a theater of any importance in this city going back, I don’t even know how far…You put on your headphones, and you can just watch plays all day. It’s magic.

When you have something you feel like you’re ready to share, how does that work? How do you know when it’s ready and with whom to share it?

I’ve been writing novels for 20 years, and I have anywhere between five and eight people that I’ll turn to over the course of the writing of it. You have to deploy them strategically, because when a reader has read it once they’re burned. The element of surprise is gone.

In the case of writing this play, it’s an entirely different thing, because the people that read my books for me, they’re not play people. And so I have a couple of people who are familiar with plays, and they’ve given me some reads. And I’m doing table reads at my house. We all sit around my table, and they read it and I listen, and then we talk about it and I get their feedback.

How do you deal with criticism?

Criticism is the foundation of the writing process, and it’s never easy, but it’s essential. The key is to find people who can give you constructive criticism so you’re not feeling torn down when you’re getting the feedback.

I didn’t get an MFA, I just took a couple creative writing classes when I was majoring in English in college. And the biggest skill that those classes conferred to me was I started learning to separate myself from my work so that when I received criticism, I wasn’t taking it personally. When you can make that separation inside yourself, that’s the first step to be able to work in a constructive way with criticism. But it’s also key to find people who aren’t just like, “Oh, I didn’t like it.” So it’s a combination of what you bring to it and assigning readers who can bring something to it that’s going to help you.

Tied to that, how do you navigate online criticism?

I don’t read my Amazon reviews, I don’t go to Goodreads. I’m not interested in that, because there’s no culpability there. The only way to responsibly give criticism is to put your name and your face behind it and have it be a person-to-person transaction. And so the internet is the enemy! I don’t pay attention to any of that kind of stuff.

How do you think that being a parent has made you a better writer?

Oh my gosh, in so many ways. The novel I just finished, Feast Your Eyes, is essentially my attempt to grapple with that very question: Is it possible to be both an excellent artist and an excellent parent, or do you have to compromise one to do the other all the way? And as I was researching and reading biographies of artists who are also parents, the results were not encouraging. There’s a lot of really crappy parenting decisions made in the name of trying to get your art out there and to follow your artistic ambition.

Coming at the other side of it, one thing that saved me is I saw the retrospective of Louise Bourgeois at the Guggenheim. I don’t know if you do this, but… when I was young, whenever I’d go to an art exhibit, I would always do the math. I was like, Okay, here’s when they were born, so how old were they when they made this? And it was always like, Okay, I have five more years to do something as good as that. Or I missed my chance to do something like that. They were younger than I am now. So I was always playing that game.

I was going up the ramp of the Guggenheim looking at Louise Bourgeois stuff. It was chronological, and I noticed that she had this dense prolific period in her early years, and then things thinned out. I’m like, “Oh, what’s going on? … Oh, she had three sons.” But then things got prolific again. And I was like, “Oh, her kids grew up.” And the art that came out on the other side of that was so much more interesting, so much richer. And so what I realized is that they’re not in competition: They add to one another, they enhance each other.

How do you define success now? And is that different than when you were younger?

It is, but I’m also a funny case in that I had very early success: I had a novel that was a bestseller and critically acclaimed and got made into a movie. I got to check all the boxes right out of the gate when I was 28 years old. And so I always have that to fall back on, and I feel so lucky. But there are so many things that are amazing that don’t get that attention, and so being good is not the only part. A lot of it is timing. A lot of it is luck. A lot of it just happens to be where the culture is at the time.

I didn’t appreciate that when Bee Season did what it did. I was just like, “Oh, this is how it will always be, and every book that I write will be a lovely success.” And guess what? That didn’t happen. And so there was definitely a reckoning where I had to figure out, “Well, what is success?” I have it easier, I think, than a lot of other writers who haven’t yet had that kind of external validation.

I’ve since had books that haven’t sold much or that people haven’t liked or that no one cares much about. And I realized that it didn’t matter. I was still a writer and I still wanted to make books, and this is what I was going to do with my life. And that, for me, success now means finding a way to live a life that allows me to do what I love and to have a community in which I’m supported.

Did the experience of having a movie based on one of your novels change anything for you? Did it change the way you approached writing?

I never thought I would be super-successful with writing. My aspiration when I was growing up was just I wanted to be published. The movie was such a bizarre [thing]. I was like, “Really? You want to make a movie of my book? Okay.”

But we’re sitting in a house that I was able to get a 30-year mortgage on because I had a book that was turned into a film, so materially, it changed a lot. It’s one of the major reasons I think I still get to live in New York where so many of my other friends with families can’t. So I don’t know where I’d be if I didn’t have that early success that allowed me to establish a place of stability for myself.

What are some lessons you’ve learned that you wish you had known when you were younger?

When good things happen, milk them. I didn’t realize that—that it comes, and then it goes. When I was asked to be doing all these residencies and and apply for various things, I was like, “Oh no, I’m fine, thanks. I’ve got my work life.” But when opportunities come your way, grab them, because they might never ever come again.

Are you at a place in your career that you had hoped and/or expected to be by now?

I’m pretty comfortable with where I am in terms of my creative life and how I’m structuring it. The thing I’m happiest about is that I’ve come up with a way to separate my art from how to make money. My books are not how I pay my mortgage. My books are not how I put food on the table. The teaching that I do and my husband does—he’s a cartoonist, and he teaches too—between the two of us, we are able to do what we need to do to live. We’re not living on a fancy level, but we don’t need to. We have what we need, and that gives us the freedom to artistically do what we want to do.

So I’m never writing a book knowing that I need this advance or we’re going to lose the house, and that’s essential. That was a process for sure, to figure out how to do that. But now that I have, it’s gravy. I can write whatever I want to write. I can take as long as I want to write it, and it can tank and it doesn’t affect my ability to provide for my family and to live where I live. That’s key.

What do you love about what you do?

The intellectual and creative freedom to go wherever I want to go and make what I want to make—and then to know that there’s a fairly good chance that someone out in the world will want to read it. That’s amazing to me.