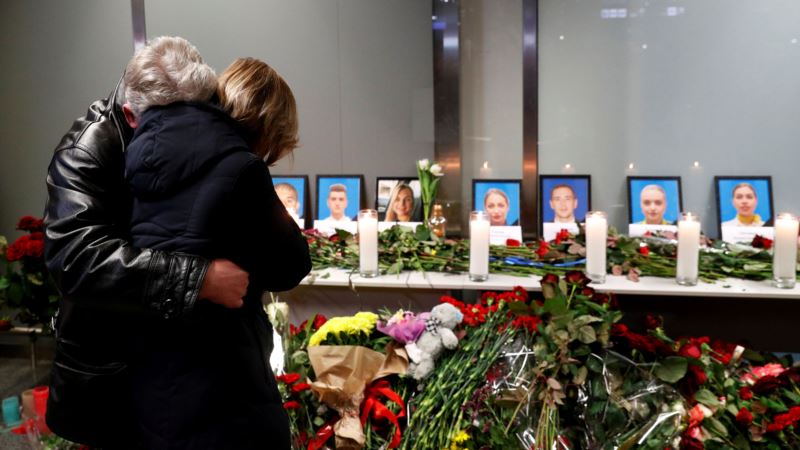 Ukraine observed a day of national mourning on January 9 as aviation authorities frantically searched for answers after the crash of a Ukrainian airliner southwest of Tehran that killed all 176 on board.

President Volodymyr Zelenskiy addressed the nation a day after the crash, saying the state was prepared to provide families who lost relatives in the accident “with all the help they need” and cautioned that the disaster was “not a topic for social media hype, sensationalism or conspiracy theories.”

The Boeing 737-800 en route to Kyiv crashed shortly after taking off on January 8 from Tehran’s Imam Khomeini airport with 63 Canadians, 82 Iranians, 10 Swedes, four Afghans, three Germans, and three Britons on board, along with 11 Ukrainians, including nine crew.

The Iranian Civil Aviation Organization said on January 9 that initial evidence gleaned from eye witnesses on the ground and in a passing aircraft showed that Ukrainian Airlines flight PS 752 was on fire and had turned back towards the airport before it crashed.

Uncertainty about the cause of the crash, which occurred hours after Iran launched missile attacks on U.S.-led forces in Iraq, has prompted some speculation that the plane may have been attacked.

Ukrainian investigators, 45 of whom arrived in Tehran on January 9, said that they were seeking to search debris at the crash site to help determine the cause, including the possibility that a missile attack or terrorism may be to blame.

“Now our information space is filled with numerous theories and speculations about the tragedy. It is clear that we all want to know the truth as soon as possible. But in such cases, speed can interfere with the truth. We need to wait for at least the preliminary report of the investigation commission,” Zelenskiy said.

“We need patience, endurance and wisdom. This scary story should teach all of us — and every citizen of Ukraine and every world leader — to appreciate human life,” he added.

The crew flying the three-year-old plane, which had its last scheduled maintenance on January 6, initially headed west to leave the airport zone, sent no distress signals, nor did they contact ground control, according to the Iranian aviation authority.

Iranian state media had initially reported that the plane caught fire after crashing, but a video aired by the state broadcaster appeared to show the plane already on fire as it fell from the night sky.

However, five security sources — three Americans, one European, and one Canadian — who asked not to be named, told Reuters that the Western intelligence agencies’ initial assessment was that the plane had encountered a technical malfunction and had not been brought down by a missile.

The Canadian security source added that there was evidence one of the jet’s engines overheated.

Iran and Ukraine have agreed “to coordinate further actions of our investigation groups closely to determine the cause of the terrible plane crash,” according to Ukrainian Foreign Minister Vadym Prystayko.

Iran has said it will not give the plane’s so-called black box, which contains flight data and cockpit voice recorders, to either U.S. authorities or to representatives of American plane maker Boeing.

Tehran is not obliged to do so and under international aviation rules is expected to be the lead investigator, while Ukraine, as the country where the plane was registered, would participate.

While the United States is home to one of the world’s top laboratories for studying black boxes after crashes, analysts say others located in Britain and France are also often called on to help investigations.

Meanwhile, Canada said it intended to play a key role in the investigation despite not having direct diplomatic relations with Tehran.

Canadian Prime Minister Justin Trudeau told a news conference in Ottawa that 138 of the 176 people on board the flight from Tehran to Kyiv had onward connections to Canada. Many were members of Canada’s large Iranian community, mainly from the Edmonton area.

Trudeau said that “Canada is one of a handful of countries with a high degree of expertise when it comes to these sorts of accidents and, therefore, we have much to contribute.”

“I am confident that in our engagement both through our allies and directly, we are going to make sure that we are a substantive contributor to this investigation,” he told reporters.

The Canadian leader said Foreign Minister Francois-Philippe Champagne would call his Iranian counterpart, Mohammad Javad Zarif, to stress the need for a full investigation into the tragedy.

Canada broke off diplomatic relations with Iran in 2012, and Italy normally acts as a proxy for communication between Ottawa and Tehran.

Trudeau also stressed the need to refrain from speculation on possible reasons for the accident.

“Obviously we are very, very early days on the investigation. It’s dangerous to speculate on possible causes,” he said.