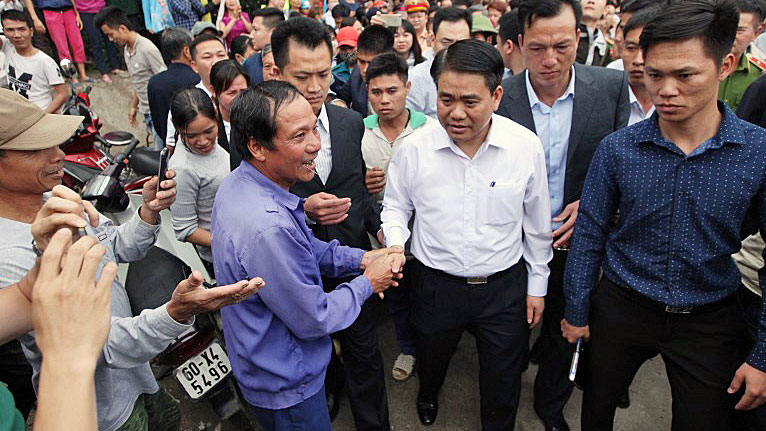 A civilian killed during a violent clash over a land dispute that also left three policemen dead has been identified as the elderly leader of a group of villagers protesting a military airport construction site near Vietnam’s capital Hanoi, state media said Friday.

Le Dinh Kinh, 84, was killed Thursday as farmers from Dong Tam commune threw grenades and petrol bombs at police in the latest flare-up of the long-running dispute, which also saw a fifth unidentified person sustain injuries.

According to media reports, the Dong Tam Commune People’s Committee handed Kinh’s body over to his family on Friday, although sources told RFA’s Vietnamese Service that relatives had yet to receive it because they refused to sign documents related to the land dispute, without providing details of what the papers said.

RFA was unable to contact Kinh’s family members or residents of Dong Tam commune to confirm the state media report on Friday.

Kinh was among the farmers taken into custody in the initial arrests in April 2017 that sparked a hostage showdown and had been identified by Vietnam’s official media as the head of the group after signing a letter of complaint that was sent to local government officials over the dispute.

On Thursday, a woman who had just escaped from Dong Tam told RFA’s Vietnamese Service that police had destroyed Kinh’s house after deploying explosive charges and pepper spray, and arrested several of the 20 or so people inside.

She said that Kinh’s grandchildren, his two sons, and daughter-in-law had been arrested, and that Kinh’s son Le Dinh Quang had tried to run away but was detained “and kicked by police with sniffer dogs.”

Police said Friday that they had released four residents, including two men and two women, who were arrested during the clash, but did not provide their names.

The official VN Express cited the Ministry of Public Security spokesman To An Xo Friday as saying that “30 protesters” had been arrested on Thursday, and that “eight grenades, dozens of knives and 20 unused petrol bombs, among other weapons, were recovered at the scene.”

An investigation has been launched into the clash that will cover charges of “murder, storing and using illegal weapons, and resisting law enforcement,” he said, adding that at least three people will be prosecuted under the charges, without revealing their names.

According to Xo, the situation in Dong Tam has been “stabilized” on Friday, and barricades have been erected on the main road leading to the commune, while those wishing to enter or leave the area are required to show identification to authorities.

Farmers in Dong Tam say the government is seizing 47 hectares (116 acres) of their farmland for the military-run Viettel Group—the country’s largest mobile phone operator—without adequately compensating them. The farmers say their families had tilled the land for generations and paid taxes and fees to the government.

In April 2017, police arrested several farmers for allegedly causing “social unrest” during a clash between authorities and commune residents over the 47 hectares of Dong Tam land.

Other farmers responded to the arrests by detaining 38 police officers and local officials, threatening to kill them if police moved against them again.

The standoff lasted a week and ended after police freed jailed farmers and the farmers freed the officers and officials, following a pledge by the Mayor of Hanoi, Nguyen Duc Chung, to investigate their complaints and not prosecute the villagers.

In July 2017, government inspectors in Hanoi ruled that the disputed land should be administered by the military and, in October, police ordered the farmers involved in the incident to turn themselves in.

In August, a Hanoi court sentenced 14 officials to between one and a half and six and a half years in prison for abusing their authority to manage land deals in Dong Tam commune.

VN Express quoted the security ministry as saying Thursday’s violence came a week after the Ministry of Defense and local authorities began building a fence for the Mieu Mon military airport.

“While land disputes are not uncommon in Vietnam, it is the first time in years that policemen have been killed in one,” the state news website said at the time.

“Vietnam’s national authorities must launch an impartial and transparent investigation of these events that gets to the bottom of what happened, who is responsible for the violence, and whether police used excessive force,” he said in a statement.

He also called on Vietnam to permit immediate and unfettered access to the area to local and international journalists, diplomats, United Nations agency officials and other impartial observers to assess what happened and monitor the government’s investigation of this incident.

In the Dong Tam dispute, the authorities maintain that the farmers have illegally occupied land earmarked for the military nearly 40 years ago, which was allocated to Viettel in 2015 to build a defense-related project.

While all land in Vietnam is ultimately held by the state, land confiscations have become a flashpoint as residents accuse the government of pushing small landholders aside in favor of lucrative real estate projects, and of paying too little in compensation to those whose land is taken.

“Unfair and arbitrary land confiscation for economic projects, displacing local people, has been a major problem in the country for the past two decades,” said Robertson of HRW.

“Vietnam government officials need to recognize the importance of carrying out dialogues and negotiations with farmers to solve land disputes like Dong Tam in a peaceful manner rather than using violence,” he added.

The U.S. State Department detailed numerous reports of clashes between local residents and authorities at land expropriation sites in Vietnam during 2018 in the latest edition of its annual Country Reports on Human Rights Practices, noting that “disputes regarding land expropriation for development projects remained a significant source of public grievance.”