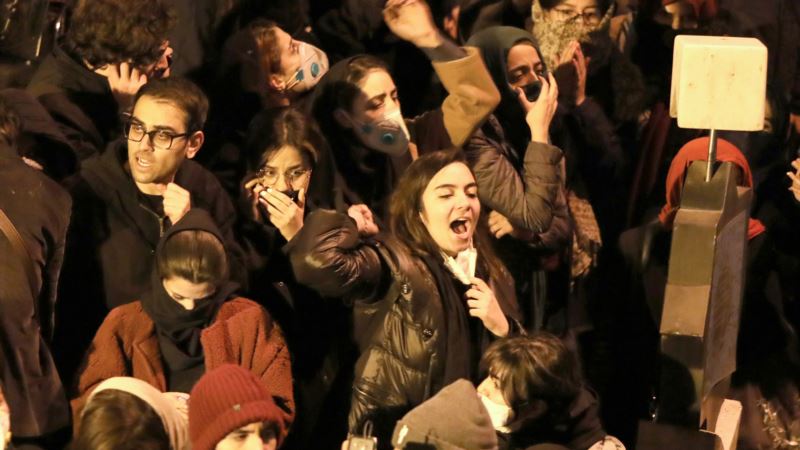 WASHINGTON — U.S. President Donald Trump expressed support for “brave” Iranian protesters and warned the government that the “world is watching” as demonstrators took to the streets of Tehran to express anger after Iran admitted it mistakenly shot down a Ukrainian airliner.

“To the brave, long-suffering people of Iran: I’ve stood with you since the beginning of my Presidency, and my Administration will continue to stand with you. We are following your protests closely, and are inspired by your courage,” he wrote on Twitter on January 11 in English and Farsi.

He added that Tehran “must allow human rights groups to monitor and report facts from the ground on the ongoing protests by the Iranian people.”

“There cannot be another massacre of peaceful protesters, nor an internet shutdown. The world is watching,” he added, referring to a previous round of antigovernment protests in November and December that saw more than 300 people killed and a shutdown of the Internet.

Trump’s comments came as hundreds of protesters gathered outside a university in Tehran and other parts of the capital to call for justice and to demand that government leaders step down. Protests also broke out in Isfahan, Hamadan, Sari, Rasht, and Babol, according to posts on social media.

“Resignation is not enough,” protesters chanted in front of Tehran’s Amir Kabir University while demanding a trial for those responsible for the Janaury 3 downing of a Ukrainian airliner that killed all 176 people on board.

Amateur videos posted on social media also showed protesters chanting “dishonorable” in an apparent reference to Iranian authorities, who finally admitted after days of denials that a missile fired by its forces caused the crash.

Iran’s semiofficial Fars news agency said some of the protesters ripped up photos of Major General Qasem Soleimani, the powerful head of the elite foreign arm of Iran’s Islamic Revolutionary Guards Corps who was assassinated by the United States on January 3.

Fars estimated the protesters numbered between 700 and 1,000.

Iran early on January 11 admitted that its military “unintentionally” shot down a Ukrainian airliner outside of Tehran.

The military said the plane was mistaken for a “hostile target” after it turned toward a “sensitive military center” of the Islamic Revolutionary Guards Corps (IRGC).

It added that the military was at its “highest level of readiness” amid raised tensions with the United States.

The government said those responsible for the tragedy would be brought to justice.

Although admitting its forces shot down the plane, Iran attempted to put some of the blame on the United States, with Foreign Minister Mohammad Javad Zarif saying the incident occurred “at a time of crisis caused by U.S. adventurism.”

Amirali Hajizadeh, head of the aerospace division of the (IRGC), said on January 11 that his unit accepts “full responsibility” for the tragedy.

Until the admission, Tehran had vehemently denied allegations by Western leaders and experts that evidence indicated an Iranian missile had brought down the plane.

“We expect from Iran assurances of their readiness for a full and open investigation, bringing those responsible to justice, the return of the bodies of the dead, the payment of compensation, official apologies through diplomatic channels,” Zelensky said on January 11.

Zelenskiy spoke later in the day by phone with Iranian President Hassan Rohani. Zelenskiy’s office said Rohani apologized for the tragedy and promised that those responsible would be held accountable. The two also discussed Iranian compensation to the victims, the office said.

With reporting by RFE/RL’s Radio Farda, Reuters, AP, and AFP