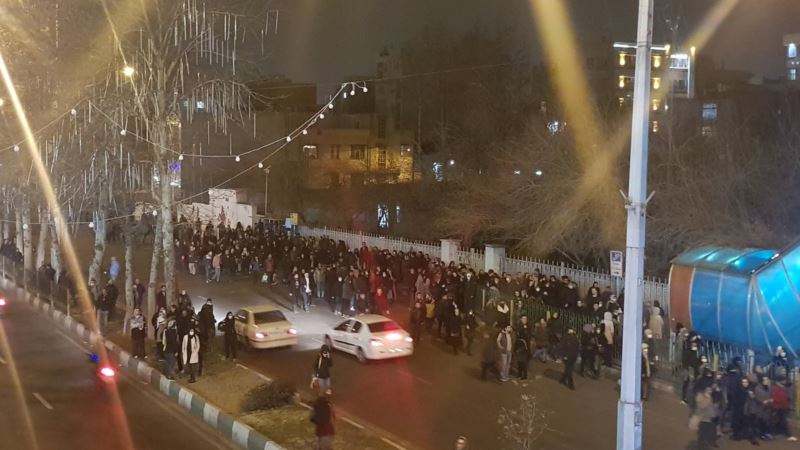 As angry demonstrations broke out in Iran for a second day over the way Tehran has handled the downing of a Ukrainian passenger airliner by its air defenses, reports suggest the authorities have refrained from using excessive force to confront demonstrators.

But the situation in Tehran and in other Iranian cities was tense throughout the day on January 12, and tensions were rising as crowds began to gather for planned evening demonstrations.

At sundown, one clash was reported between security forces and protesters at Tehran’s Beheshti University, where student protesters had been chanting anti-government slogans throughout the day.

Meanwhile, security forces were bracing for mass demonstrations on the evening of January 12 at several public spaces in central Tehran, including Azadi Square and Vali-e Asr Square.

A day earlier, protests broke out in several Iranian cities when senior officials admitted that Ukrainian International Airlines Flight PS752 had, indeed, been shot down by an Iranian antiaircraft missile shortly after it took off from Tehran’s Imam Kohmeini International Airport on January 8. All 176 people aboard were killed.

Iran’s military said the Boeing 737-800 airliner was shot down “unintentionally” by air-defense forces, which were on high alert following an Iranian ballistic-missile attack a few hours earlier against U.S. forces in Iraq.

Over the previous three days, Iranian military and political leaders had repeatedly declared it was impossible that Iranian air defenses had shot down the plane.

They insisted that such reports were part of a campaign of “psychological warfare” against Iran being led by the United States.

After the January 11 admission, protests broke out in the cities of Tehran, Isfahan, Hamadan, Kerman, Rasht, Sari, Shiraz, Babol, and Urmian.

Demonstrators were confronted late on January 11 at Hafez Bridge in central Tehran by police who fired tear gas at them. But reports suggest authorities were more restrained in other cities where protests continued into the early morning hours of January 12.

Shortly after dawn on January 12, security forces were deployed across the Iranian capital and in several other cities in an attempt to prevent crowds from gathering for further demonstrations.

Around noon, some 1,000 demonstrators at Beheshti University and hundreds at Allameh Tabatabai University in Tehran could be heard chanting: “They are lying that our enemy is America. Our enemy is right here.”

Those protesters also declared “the students are vigilant and are disgusted” with Supreme Leader Ayatollah Ali Khamenei.

Meanwhile, at Isfahan University of Technology in the central Iranian city of Isfahan, protesters declared that the IRGC “commits crimes” and Iran’s supreme leader “supports” them.

At Vali-e Asr Square in Tehran, demonstrators on January 12 unveiled a large black banner with the names of victims of Flight PS752 — many of whom were Iranian or Iranian-Canadian citizens.

But by mid-morning, after riot police and plainclothes security officers were deployed at Vali-e Asr Square and elsewhere in Tehran, the banner had been removed.

Iranian state news agencies, which usually criticize protesters who chant anti-government slogans, did not condemn the students who demonstrated in Tehran and Isfahan on January 12.

Instead, the news agencies noted that “some angry students” had chanted at gatherings that were meant to be vigils for the victims of Flight PS752.

The latest protests in Iran come just weeks after authorities used deadly violence to quell anti-government demonstrations that began in mid-November after Tehran announced that gasoline prices in the country would be dramatically increased.

As those protests spread to more than 100 Iranian towns and cities, they quickly turned political, with some slogans targeting Iran’s conservative clerical establishment — including chants of “Mullahs get lost,” “Death to Khamenei,” and “We do not want the Islamic republic.”

That prompted authorities in Tehran to shut down the Internet across the country for six days in an attempt to stop information about the protests and the government crackdown from being spread on social media.

Reuters in late December quoted three unnamed officials from Iran’s Interior Ministry who said the death toll from the government crackdown was “about 1,500” people, including “at least 17 teenagers and about 400 women.”