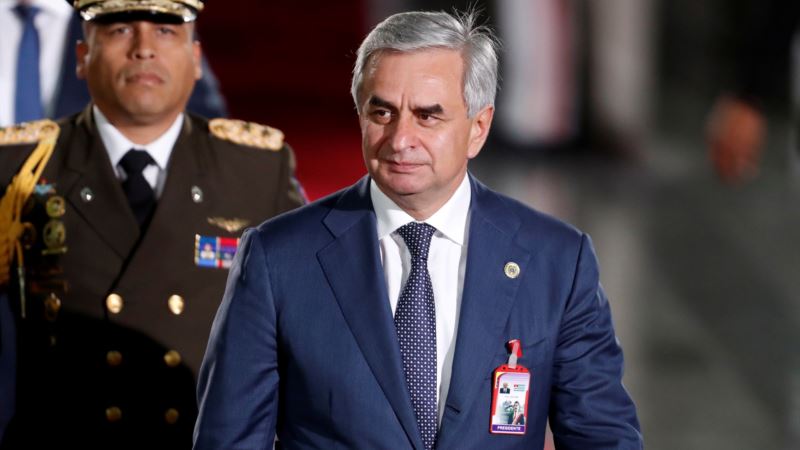 Raul Khajimba, leader of the self-proclaimed breakaway Georgian republic of Abkhazia, who resigned following four days of protests in the regional capital, Sukhumi, does not plan to take part in a new election.

Separatist Vice President Aslan Bartsits told lawmakers, who accepted the resignation on January 13, that Khajimba “will continue to take part in political life” but “is not going to run in the election.”

Parliamentary speaker Valery Kvarchia confirmed the resignation, telling Russia’s TASS news agency that “the issue of who will act [as president] has not yet been decided.”

“It may be the prime minister,” he added, referring to Prime Minister Valery Bganba.

Kvarchia added the region’s de facto legislature would take up the issue in a session later on January 13.

The crisis in the breakaway Georgian region erupted on January 9 when demonstrators stormed the Sukhumi building housing Khajimba’s administration, asserting the September election that he won was fraudulent.

The legislature later called on Khajimba to step down.

Khajimba and his supporters had resisted calls for his resignation and planned to launch legal appeals before his January 12 about-face.

The head of the region’s self-proclaimed Central Election Commission, Tamaz Gogia, said on January 12 that he did not agree with the Supreme Court ruling, but that he would abide by it. The commission set March 22 as the date for a new election.

The Black Sea region has had de facto independence from Georgia since a war against Tbilisi in 1992-93. After Russia and Georgia fought a five-day war in August 2008, Moscow unilaterally recognized Abkhazia and another breakaway Georgian region, South Ossetia, as independent states.

Both regions have since been largely propped up by Moscow and host Russian military forces.

Georgia and most of the international community consider both regions to be occupied territories.

With reporting by TASS, Sputnik, Interfax, and Kavkazsky Uzel