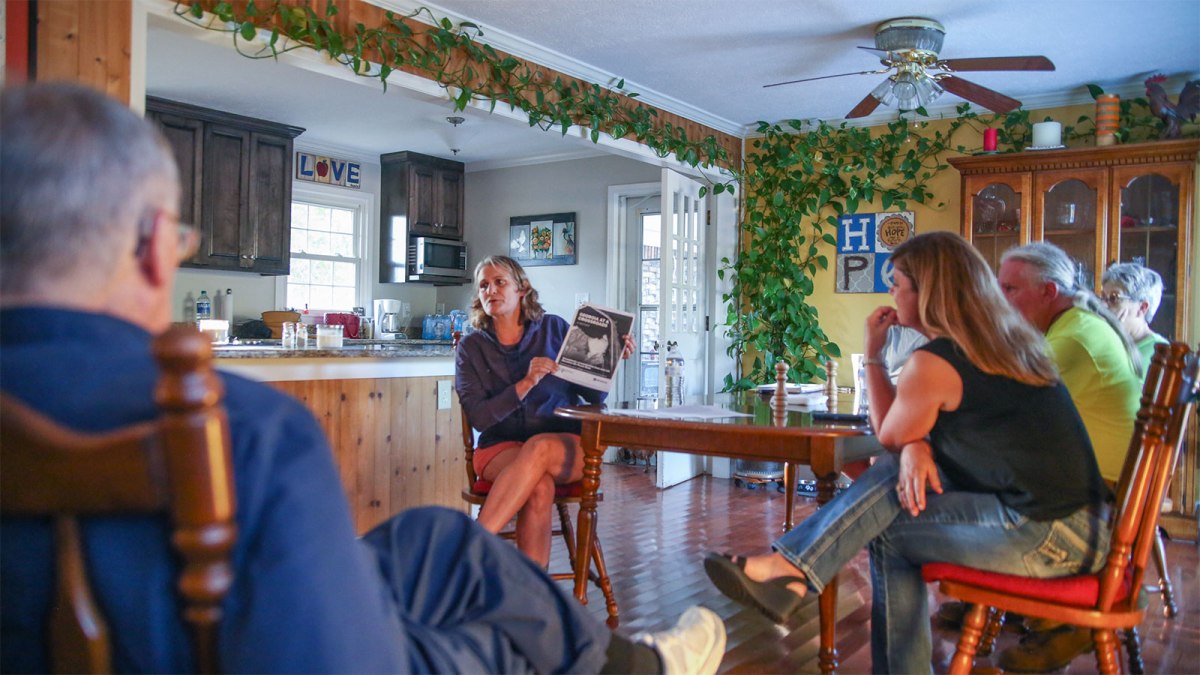 Just before Labor Day, a dozen Democratic state lawmakers convened in Atlanta to discuss how to protect Georgia’s water. The group had anticipated that Wheeler’s EPA would grant the state’s coal ash permitting request. They sat around a long wooden table, across the street from the Georgia State Capitol, listening to Hilburn and Sams break down the environmental and public health costs of coal ash. Sams sketched out the potential legislative action the lawmakers could take, which would pit them against both a GOP-controlled legislature and a utility with one of the largest lobbying forces in the state. A review by Georgia Health News and Grist found the Southern Company and Georgia Power, along with affiliated political action committees and individual employees, donated over $1.7 million to state lawmakers — mostly Republicans — between 2014 and 2019.

Sams presented two options: First, there was the “Virginia” bill modeled after legislation that required Richmond-based Dominion Energy to excavate coal ash from unlined ponds, and either recycle it into cement and other products, or move into landfills. Most of the assembled agreed that if they chose this option, Georgia Power would potentially be successful in fighting the “Virginia” bill.

The second option was the so-called “banana peel” bill. As Sams explained, Georgia law prohibited solid-waste landfills from operating within 2 miles of a “recharge zone,” the surface area in which water can enter an aquifer. Coal ash ponds were long exempt from this rule. There was a simple solution: Change the definition of “solid waste” to include coal ash. Democrats were giddy. It was simple, easy to follow, and more likely to get support from Republicans with constituents near coal plants, or those in south Georgia who represented farmers that relied on clean water.

Leaning back in his seersucker suit, Senate Minority Leader Bob Trammell declared: “You can talk about coal ash all day long, but you mention landfill …”

Ever the message man, Sams put it another way: “When you’re basically breaking it down, household garbage — banana peels and coffee grounds — are more protected than this stuff.”

“That’s such a good soundbite,” one lawmaker said.

“When you have daddies and mommies with kids who have cancer look straight into the camera, talking about getting sick, it’s going to be an issue,” Sams said. “It’ll become a national story.”

Should Georgia Power be allowed to seal the coal ash in place at Scherer, Sams fears that Juliette residents will spend their lives threatened by dangerous leaks. So the Riverkeeper recruited attorney and former Democratic state representative Stacey Evans — who ran for governor in 2018, and is now running again for a seat in her old chamber — to help represent Juliette residents in a planned series of lawsuits filed against Georgia Power over their belief that they had been exposed to carcinogens like hexavalent chromium. And the lawmakers Sams spoke to late in the summer said they expect to introduce the “banana peel” bill around the start of the 2020 legislative session, which begins this week. In the meantime, the Altamaha Riverkeeper will keep testing.

Word had spread about the organization’s campaign. And in early October, a dozen Juliette residents were awaiting Hilburn inside Karl Cass’s living room just down the road from Bowdoin’s home. Some had children diagnosed with cancers. Others said they had lost spouses or parents too early. They all sought answers, peace, and hope. As Cass’s sister, Gini Seitz, handed out bottled water, Hilburn gave a brief presentation about coal ash, the organization’s efforts to end the use of unlined ponds, and why Juliette residents needed their water tested.

“Why would a person not want their water to be tested?” one resident, wearing a camouflage “Make America Great Again” hat, asked.

“People had to be quiet for a long time,” said Seitz, who, until recently, had been married to an air quality inspector at the Scherer plant. “Georgia Power put the food on the table for my family.”

Seitz and nearly two dozen other central Georgians have joined the Riverkeeper to pitch in on a canvassing and well-testing campaign. Sams is now running the campaign, as this past fall Hilburn had to resign from the Riverkeeper for what Sams called “personal reasons.” (The Altamaha Riverkeeper declined to comment on her departure, but it did vouch for her work in Juliette.) Hilburn said that after five years watching over the Altamaha drain basin, she intends to focus her time working on environmental issues along the Georgia coast, where she lives.

Sams had to convince Seitz and the other volunteers that this round of testing — and the risk of growing loud in a quiet company town — would be worth their trouble. They’d been down this road before. Residents filed a lawsuit in 2013 against Georgia Power and the plant’s minority owners claiming the utility had knowingly released toxins contained in coal ash into Juliette’s air and groundwater. The lawsuit contended the utility’s actions caused a “loss of potable water supply and increased risk of diseases.” That same year, a Georgia Department of Public Health report found that kidney cancer rates in Monroe County “were significantly higher than the state as a whole,” but noted that they were clustered in more populated parts of the county as opposed to Juliette. A judge dismissed the case without prejudice in 2014, leaving the door open for future claims. This time would be different, Sams assured them, because the effort would be more transparent, and would happen in conjunction with legislative and legal efforts. In the following weeks, he asked the volunteers to canvass 1,000 residents in a 2-mile radius around the plant and have their neighbors take a “Scherer community concern” survey, which asks about their water consumption, wells, and worries. Emory University researchers will then conduct a more detailed health survey with any interested resident.

For its part, Georgia Power “stand[s] by the data delivered” from 57 groundwater monitoring wells at Scherer, indicating there’s been no seepage from Plant Scherer’s coal ash ponds, said spokesperson Crawford. The monitoring complies with federal and state laws and regulations that are analyzed by “third-party contractors for sampling and accredited independent laboratories for analysis.” And the company argues that its pond closure plans use “proven engineering methods specifically designed to be protective of groundwater and the environment.”

Sams doesn’t buy it. In the upcoming year, he hopes to collect 100 more samples, which he’s sure will turn up more contaminated drinking water. That evidence could spur more outrage. And that outrage could potentially force Georgia Power to store its coal ash somewhere other than its unlined ponds. He noted that the data would be made public so that he and the residents could use it for personal injury lawsuits, advocate for change with state lawmakers, and raise funding for more testing.

“If Georgia Power has their way, the groundwater will forever be contaminated,” Sams insisted. “If we can’t convince them to excavate, it’s over. This is our last hurrah.”

This past fall, before she left the Altamaha Riverkeeper, Hilburn walked inside Tony Bowdoin’s Juliette home and handed him a manila envelope with the test results from his well’s water. There were detectable levels of strontium, a constituent of coal ash linked to possible bone damage, and hexavalent chromium at a level of 4.3 parts per billion. The EPA does not have a drinking water standard solely for hexavalent chromium, but several states have strong standards for the carcinogen: California set a public health goal of 0.02 ppb of hexavalent chromium in drinking water in 2011 following the Erin Brockovich case; in 2015, North Carolina set a new baseline level for examining residents exposed to the metal at 0.07 ppb following the Duke Energy coal ash spill. The levels in Bowdoin’s well were more than 60 times higher than the North Carolina standard, according to the Riverkeeper’s third-party testing results, which were reviewed by Georgia Health News and Grist.