The producers of the game show “Jeopardy” broadcast a rare, uncorrected error on Friday, when a contestant mistakenly said that the Church of the Nativity, the site in Bethlehem believed by Christians to be the birthplace of Jesus, was in Israel, but was awarded $200 for what millions of viewers were told was the right answer.

Another contestant, Katie Needle, looked puzzled as the show then went to a commercial break. That’s because, moments earlier, Needle had offered the correct answer, “What is Palestine?” putting her response in the form of a question in keeping with the show’s rules, only to be told that she was wrong, and had $200 deducted from her score.

Compounding the confusion, when the show returned from the break, Needle’s score had been adjusted to return the $200 she had been penalized for a wrong answer, but the money had not been taken away from the contestant who said the church was in Israel, Jack McGuire. The show’s host, Alex Trebek, did not explain the change in scores, or offer an on-air correction, as he had earlier in the show when the judges decided after the fact that another answer had mistakenly been judged correct.

To some viewers at home, that looked like an attempt at a Solomonic compromise by show’s judges — a panel overseen by Jeopardy’s executive producer, Harry Friedman, and head writer, Billy Wisse — who perhaps decided that it would be uncomfortable to explain the actual status of Bethlehem, a Palestinian-administered city in the Israeli occupied West Bank.

But by failing to adjust McGuire’s score, the producers seemed to put a seal of approval on what even ultranationalist Israelis, who like to refer to the occupied territories as “disputed,” would consider an error. Bethlehem is not even claimed by Israel, it is literally walled off from Israel by a massive concrete barrier, topped with watchtowers, constructed by the Israeli military.

That wall was prominently featured in news reports on ABC, the network that broadcasts “Jeopardy,” in 2014, when Pope Francis leaned against it in prayer before celebrating mass in Bethlehem’s Manger Square.

Pope Francis prayed at Israel’s separation barrier in Bethlehem on May 25, 2014.

The unit of Israel’s military that administers the occupation, known as the Coordination of Government Activities in the Territories, or COGAT, refers to the West Bank as “Judea and Samaria,” but acknowledges that this region is not part of Israel. According to a COGAT primer on the city, Bethlehem is “the most central crossing from Judea and Samaria into Israel,” and its local economy is supported by “goods exported to Israel.” 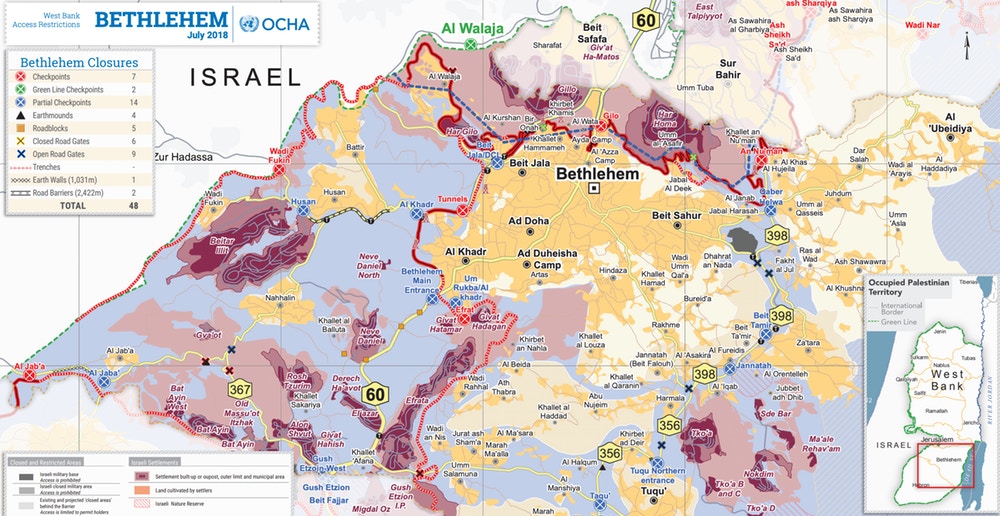 A map showing the relationship between Israel and the occupied West Bank around Bethlehem. Israeli settlements are in red, areas administered by the Palestinian Authority are in yellow.

United Nations Office for the Coordination of Humanitarian Affairs

When Ariel Sharon, an ultranationalist Israeli prime minister, argued in 2003 that a political solution to the conflict with the Palestinians was necessary because “the idea that we can continue holding under occupation — and it is occupation, you might not like this word, but it’s really an occupation — to hold 3.5 million Palestinians under occupation is, in my opinion, a very bad thing for us and for them,” he specified that the alternative was to put Israeli troops permanently in Palestinian cities like Jenin, Nablus, Ramallah and Bethlehem.

Although the producers of “Jeopardy” initially refused to comment, a witness who was in the studio for the taping last fall told The Intercept that they appeared to be aware that they had made a mistake almost immediately. According to the source, who asked not to be identified for fear of violating a promise to keep the results of the pre-recorded contest secret, audience members sensed that something was wrong when the show’s producers and writers clustered around Trebek during an extended pause in the taping at that stage.

After intense discussions, the host, whose mic remained on, could be heard saying in a low voice to the producers, “you’re going to have to explain it to them,” apparently instructing the staff to talk to the contestants. When the show’s staff did then address the contestants, a decision seemed to have been made to eliminate the question and both answers from the show, because the scores were reset to what they were before the question, and a new question was recorded in its place. Because McGuire answered that question correctly, a new $200 was added to his score.

After nearly three days of rampant speculation, the producers of “Jeopardy” released an online correction on Monday afternoon, explaining that, after the question about the church in Bethlehem was asked, they “became aware that the clue was flawed as written and that determining an acceptable response would be problematic.” Because of a production error, the substitute question was not used instead of the question about Bethlehem when the episode, which was recorded about three months ago, was broadcast on Friday.

In an interview with The A.V. Club in 2015, the show’s head writer, Billy Wisse, explained that, during the recording of episodes, he sits at the foot of the stage with fellow writers and producers who act as the judges, “Listening, first and foremost, for responses that they give that we didn’t expect that turn out to be correct.”

The scripts for the games, Wisse added, list the answers Trebek is instructed to accept, as well as a “do not accept,” list, “if there’s something that seems like a plausible response that we’ve thought of but we know is not right. But sometimes things come out of the blue and we just say, ‘Well, we never thought of that.’”

A spokeswoman for the show did not reply to a request to explain why the producers decided during the pause in taping the episode that it would have been “problematic” to simply accept Needle’s answer that the church is in Palestine.

According to UNESCO, the United Nations Educational, Scientific and Cultural Organization, which admitted Palestine as a member state in 2011, and added the Church of the Nativity to its list of World Heritage sites the following year, the site is in Palestine. But Israel and the United States lobbied against the church’s listing, and remain bitterly opposed Palestine’s UNESCO membership, describing it as part of the Palestinian Authority’s campaign to win international recognition of Palestinian statehood without first agreeing to give Israel a say on where its borders should be.

In 2017, citing what it called “anti-Israel bias,” the Trump administration announced that it was withdrawing from UNESCO, and Israel’s prime minister, Benjamin Netanyahu, said that his nation would follow suit, “because UNESCO has become a theater of the absurd and instead of preserving history, distorts it.”

Although Palestine has now been recognized as a state by a majority of the world’s nations, that list does not yet include the United States or Israel, which might have influence the “Jeopardy” producers who made the decision that their writers had come up with a clue with no “acceptable response.” At the start of the game, the contestants were told that to answer clues in the category “Where’s That Church?” they would be required “to give us the present country.”

Israel plays no role in managing the church in Bethlehem, but the Palestinian Presidency does, through an advisory committee that works in conjunction with three Christian bodies that have been recognized as its protectors for centuries, under what’s called the Status Quo of the Holy Places, an international agreement that the Church of the Nativity and the holy sites in Jerusalem should be managed by mutual agreement of religious orders, without external political interference.

While it remains unclear why the show’s judges did not consider Palestine an acceptable answer in this case, it is interesting that they apparently expected any Americans who had heard of the Church of the Nativity to guess that it was in Israel.

Wisse, who now shares the title of head writer with Michele Loud, told the A.V. Club that making sure the questions are not too obscure for contestants and the audience is a constant challenge. “A lot of it is based on your age and we have to struggle with that because there’s not a lot of turnover on our staff,” Wisse added. “We continue to get older while the contestants get younger, and so we have to be aware that things that happened in the Reagan administration are not second nature to people who were born during the Reagan administration.”

“We want the contestants to answer the clues correctly,” Loud said in a recent behind-the-scenes video that showed the judges in the studio. “We’re really working hard to make sure that the people at home and the people playing the game in the studio can answer the questions.”

In a way, what the “Jeopardy” writers assume most Americans will know about the world might act as a barometer of changing views — in this case, about the struggle for civil and political rights by Palestinians living in the territories Israel has occupied since 1967.

Wisse, who presumably vetted the question and thought the Bethlehem church was in Israel, was born in 1962 into a staunchly pro-Israel family and moved to Israel when he was nine, before his family decided a year later not to settle there permanently. His mother is the neoconservative writer Ruth Wisse, who is known for her aggressive defense of Israel and her harsh criticism of both Palestinians and Israelis who advocate withdrawal from the occupied territories. (“The obvious key to the success of Arab strategy is the presence, in the disputed territories of the Gaza Strip and the West Bank of the Jordan River, of Palestinian Arabs, people who breed and bleed and advertise their misery,” she wrote in a notorious essay for the journal “Commentary” in 1988.)

While the “Jeopardy” writer’s own politics could differ from those of his mother, a spokeswoman for the show declined to say if he was the Billy Wisse who wrote a letter to the editor of The Los Angeles Times in 2007 to complain that the paper’s reporting on stalled Middle East peace talks was unfair to Israel and biased in favor of Palestinians.

If the “Jeopardy” writing staff made this error because it unthinkingly reflects the default, pro-Israel consensus of older Americans, they might well have been surprised to hear a younger contestant like Needle, who is a Bernie Sanders supporter from Brooklyn, correctly state that Bethlehem is in Palestine.

On Twitter, where Needle has shared content from the Democratic Socialists of America and defended Ilhan Omar, she was widely praised by Palestinians and their supporters for treating the existence of Palestine as a matter of fact.

@Jeopardy you have lost a lifetime viewer. Completely unacceptable that you deny that the Church of the Nativity is in Bethlehem, Palestine and insist that it is in Israel. Thank you Katie for telling the truth.. your look towards Alex was priceless.

While she is still barred by “Jeopardy” from discussing what happened during her run on the show, after Friday’s broadcast, Needle did recommend that followers read her friend’s article in The Journal of Palestine Studies on how the Trump administration’s aid to Palestinian Authority security forces has “tethered Israeli political aims to its remit.”

After Sana Saeed, a producer for Al Jazeera’s AJ+ channel, tweeted her support for the “Jeopardy” contestant, Needle thanked her, and wrote simply, “Palestine should be free.”

Thanks! Palestine should be free ??