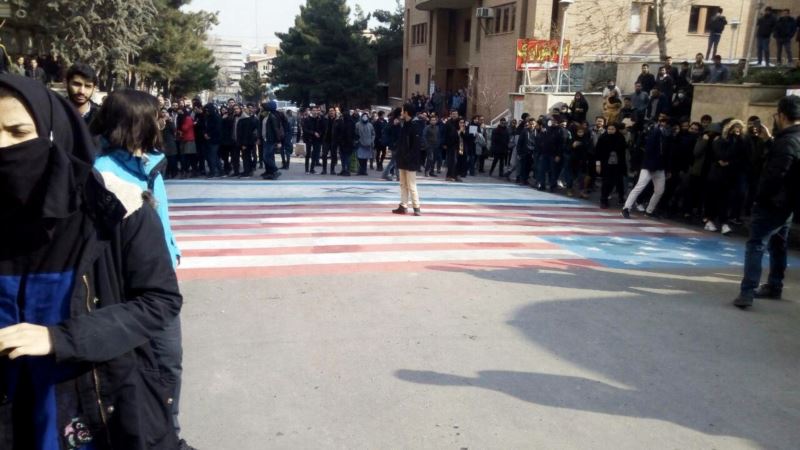 Chanting “Death to America” and trampling upon and burning U.S. flags have been part of state-sponsored, anti-American acts in Iran for the past 40 years.

Yet people’s opposition to that mantra and disrespecting the flag of the United States and others has increased in the Islamic republic in recent years — with some daring to publicly question the rationale behind such acts.

Amid the fury in Iran in recent days over the establishment’s mishandling of the downing of a Ukrainian passenger plane by the Islamic Revolutionary Guards Corps (IRGC), killing 176 people, students at two universities were seen walking around U.S. flags painted on the ground by officials in public acts of defiance against the clerical establishment and the state propaganda that portrays the United States and Israel as Tehran’s biggest enemies.

Videos of the incident at Tehran’s Shahid Beheshti University — which has been blacklisted by the United States for its nuclear-research activities — showed a majority of students moving to avoid treading upon painted American and Israeli flags.

The video went viral on social media and prompted U.S. President Donald Trump to tweet that the action was “big progress!”

In another video shot amid the recent protests over the state’s handling of the Ukrainian plane tragedy, students at Sanandaj University in Kurdistan Province are seen refusing to take the stairs upon which a large U.S. flag had been painted.

Similar acts of defiance by people in Iran have been reported in recent years but the public refusal of large groups of students to walk on depictions of U.S. flags appears to be unprecedented.

Tehran University professor Sadegh Zibakalam, who in 2016 publicly refused to walk on U.S. and Israeli flags painted on the floor of a university building, reposted a video of his actions on his Instagram page while welcoming the recent public shows of defiance by Iranian students.

Zibakalam said in the past two years he’s faced attacks from hard-liners who, he said, have called him a “traitor” and an “anti-revolutionary” for going to great lengths — including climbing along a bannister — to avoid stepping on U.S. and Israeli flags.

“When I saw that students in this country are not willing, like in the past, to step on American flags, the pain of all the insults [from people] went away,” the outspoken Zibakalam said on Instagram on January 14.

Zibakalam said in an interview that his refusal to trample on the U.S. and Israeli flags had earned him praise from many ordinary Iranians.

“To put it bluntly, I had never received so much praise from Iranians,” he said. “The volume of praise and approval was unbelievable.”

There have been growing calls in the Iranian media for respecting the U.S. flag and discarding the “Death to America” slogans that are regularly chanted at state events, including Friday Prayers and ceremonies marking the anniversary of the 1979 Islamic Revolution.

“The question is, what has 40 years of burning the U.S. flag and stepping on it brought for us?” a 2018 commentary published on Totreemroz.ir asked, while suggesting that such actions have zero benefit for the Iranian people.

“Not only does it not achieve anything for the country and the nation, but it makes dialogue with the rest of the world more difficult,” the commentary said.

There has also been criticism from intellectuals and artists.

Last year, famous actor Hamid Farokhnejad criticized showing disrespect toward the flag of other countries in a post to his nearly 2 million followers on Instagram.

Farokhnejad posted a video of Iraqi protesters in Basra burning an Iranian flag and wrote: “I’m posting this so you can see how ugly it is to show disrespect to the flag of a country…. We shouldn’t repeat this mistake.”

Filmmaker Shahin Samadpour said in 2018 that while he opposes many American actions and “hates” Israeli policies, he believes that “trampling and burning flags of other countries is outdated,” while adding that Iran’s younger generation does not want to be “dictated” to.

“When you paint the flag of a country on the floor in front of the entrance of a university, everyone has to step on it and there’s no choice,” he said, adding that “our younger generation wants to have a choice.”

Such moves have also been reportedly opposed by moderates in the Iranian establishment who have been pushing for better ties with the United States and other countries.

In February 2017, a U.S. flag was painted on the floor of a gate at Tehran’s Mehrabad Airport in reaction to a travel ban imposed by the Trump administration against nationals from Iran and six other mostly Muslim states. But the conservative Afkarnews.com reported that “some in the government” had pressured the IRGC to remove it.

In 2017, hard-liners criticized Sirvan Governor Bahman Jalilian for what appeared to be an effort to avoid stepping on U.S. and Israeli flags at an official event.

The hard-line Mashreghnews posted a brief video of the governor’s “surprising” move and claimed that some media and political activists had called for “serious action” against Jalilian.
Iranian Supreme Leader Ayatollah Ali Khamenei said in February that the country’s “Death to America” slogan is directed at Trump and other U.S. leaders, not at the American nation.