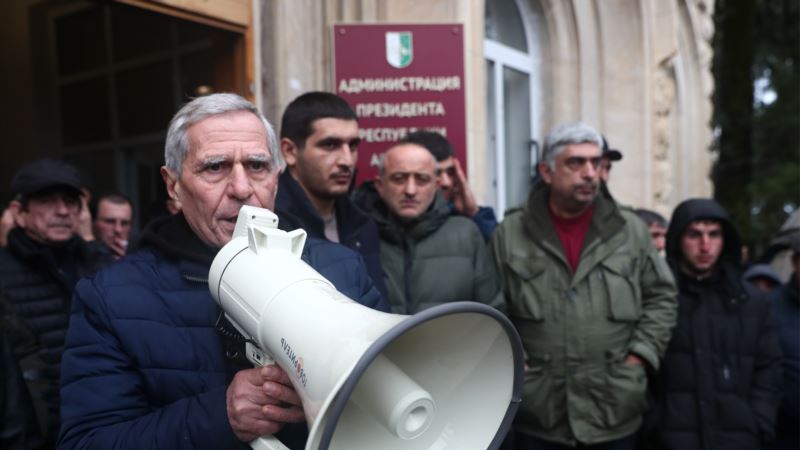 The de facto president of the self-declared republic of Abkhazia, a breakaway region of Georgia whose independence is recognized only by Russia and a few others, has stepped down amid sometimes violent protests that erupted over what his opponents say was an illegitimate electoral victory.

With Abkhaz leader Raul Khajimba out of the picture — at least for now — and new elections scheduled, where do things stand in the impoverished and increasingly isolated South Caucasus territory?

Khajimba’s January 13 resignation put an end to four days of protests that saw the storming of the de facto presidential administration in Sukhumi, efforts by Moscow to mediate, and the calling of a fresh vote to determine the region’s next de facto president.

The crisis erupted on January 9, when hundreds of protesters descended on the building that housed Khajimba’s administration as the territory’s highest court resumed hearings on an appeal of the results of the second round of the “presidential” election held in September.

Alkhas Kvitsinia of the Amtsakhara party — who became the main challenger after leading opposition candidate Aslan Bzhania fell ill due to suspected poisoning — filed the appeal after garnering 46 percent of the vote to Khajimba’s 47 percent, according to official results.

Electoral authorities approved the incumbent’s election to another five-year term, but Kvitsinia argued that the fact Khajimba had failed to reach the required majority nullified the vote. He demanded a fresh election.

Protesters also reportedly demanded the arrest of a member of the de facto presidential staff whom they accused of involvement in the deaths of three people killed in a shoot-out late last year. Among those killed was the brother of Ahra Avidzba, reportedly the organizer of the protest, who was decorated as a “hero” for his role supporting the Moscow-backed separatists fighting in parts of eastern Ukraine.

With the protesters occupying the administrative building and reportedly arming themselves, the court on January 9 postponed its hearing after disqualifying a judge seen by the opposition as close to Khajimba’s administration.

In parliament, lawmakers the same day passed an appeal asking Khajimba to step down voluntarily “due to the difficult sociopolitical situation.”

As night fell, Bzhania marked his return from medical treatment in Moscow by joining the protests at the “presidential” headquarters.

Khajimba, meanwhile, who himself led opposition protests that forced his predecessor Aleksandr Ankvab out of office in 2014, retreated to his residence and denounced the “coup attempt.”

He rejected demands that he resign, called for talks with the opposition in order to avoid “further destabilization,” and issued a statement saying that “the appeal adopted by the parliament may aggravate the social and political situation and lead to irreversible consequences.”

On January 10, Abkhazia’s top court annulled the results of the September run-off, declaring the vote invalid.

While Khajimba remained defiant and prepared his own appeal, the region’s electoral authorities announced that a new vote would be held on March 22.

Caucasus experts who spoke to RFE/RL describe a number of factors that play into the political crisis in Abkhazia, a breakaway Georgian territory that along with another breakaway Georgian region, South Ossetia, was recognized as independent by Russia and a handful of other countries following the five-day war between Russia and Georgia in August 2008.

“I think the current crisis in Abkhazia stems mainly from public frustration with a leader, Raul Khajimba, who is perceived to be weak and to have cheated to win the last election,” said Thomas de Waal, a senior fellow with Carnegie Europe. “There is a strong sense of malaise in the republic. The economy is stalled, and Russian financial aid has actually fallen in the last few years.”

De Waal, who ahead of the 2019 election wrote about Abkhazia’s fear of “Ossetianization” — essentially becoming isolated much like South Ossetia has been, despite Sukhumi’s desire to be part of the wider world — added that there has been “no progress either in developing domestically or in overcoming international isolation.”

However, de Waal noted that “Abkhaz politics is always divided, and Khajimba had many enemies.”

“The politically active segment of the population is quite small — at best a few hundred people seized the presidential building,” he said. “And we are now seeing the second president in a row in Abkhazia being forced out by a crowd.”

Aleksandr Krylov, the president of the Moscow Academic Society of Caucasian Studies, told RFE/RL’s Russian Service that the Abkhaz people are frustrated with the lack of reforms, the region has been in stagnation, and this crisis could have been expected.

“Everyone is tired of domestic disorder, the dominance of monopolies, the prevalence of crime,” he said. “All this produces great disappointment among the people.”

Addressing Abkhazia’s turbulent leadership history, Krylov said that “every time, the people expect that, with the rise of a new, strong leader, order will be instilled.”

The same was expected of Khajimba, he said, and expectations for the next leader will be similar.

Russia maintains a troop presence in Abkhazia and has significant political and economic influence in the region. In August, Russian President Putin met with Khajimba in Sochi in what some read as an endorsement of the incumbent.

But the Russians “appear to have been pretty much bystanders in this crisis — unlike in the last one of 2014, when they actively worked to remove Ankvab,” de Waal said.

“In Moscow they know that any and every Abkhaz leader is heavily reliant on them,” he said. “I think the calculation is that a leader with greater public legitimacy makes Abkhazia more stable and less of a headache, when they have other more pressing foreign policy issues to deal with.”

As in 2014, Moscow sent envoys to try to resolve the conflict, beginning with Deputy Security Council Chairman Rashid Nurgaliyev.

Later, the powerful presidential aide Vladislav Surkov — Putin’s personal adviser who is widely seen as a gray cardinal who helped craft the Kremlin’s domination of domestic politics and Russia’s expansionist policies in Ukraine and elsewhere in the former Soviet space — arrived in Sukhumi.

But Surkov and Nurgaliyev “do not determine the events that take place there,” Krylov said. “Their task is to ensure that there is no destabilization and shooting in Abkhazia.”

“In Abkhazia any politician, one way or another, is negotiable for Moscow, given the close cooperation that exists,” he said, noting that half of Abkhazia’s budget comes from Russian subsidies. “You need to be a crazy politician to quarrel with Russia.”

What Comes After The Fall?

Following his arrival in Sukhumi on January 12, Surkov never met personally with Khajimba, speaking with him only by telephone, Surkov adviser Aleksei Chesnakov announced afterward. RFE/RL’s Echo of the Caucasus desk reported that Surkov met only that evening with opposition leader Bzhania.

Initially it was reported that Khajimba was bowing out of the new vote, but he later told the Russian state news agency TASS that “the situation only calmed down yesterday. I will wait and see what to do.”

The job of leading Abkhazia, he added, “is not the easiest one and I think I will have to think about the processes that took place and why the situation developed that way.”

In the meantime, attention turns to what comes next for the territory of just under 250,000.

“The force that now has the greatest power in the Abkhaz political arena is the concentrated power of the opposition,” Krylov said.

“It solved its main task — removing the ‘president’ from power,” he told RFE/RL. “Now there will be a period of nomination, and everything will already depend on whether this political force remains unified or whether they each begin to act in their own interests.”

The reemergence of Opposition Bloc of Opposition Forces leader Bzhania, who on January 13 confirmed his intention to run in March, makes him the early front-runner.

“Bzhania is now the outright favorite to win the next election,” de Waal said. “Bzhania was actually the favorite last time round but didn’t run because he fell ill in what seems to have been a poisoning incident.”