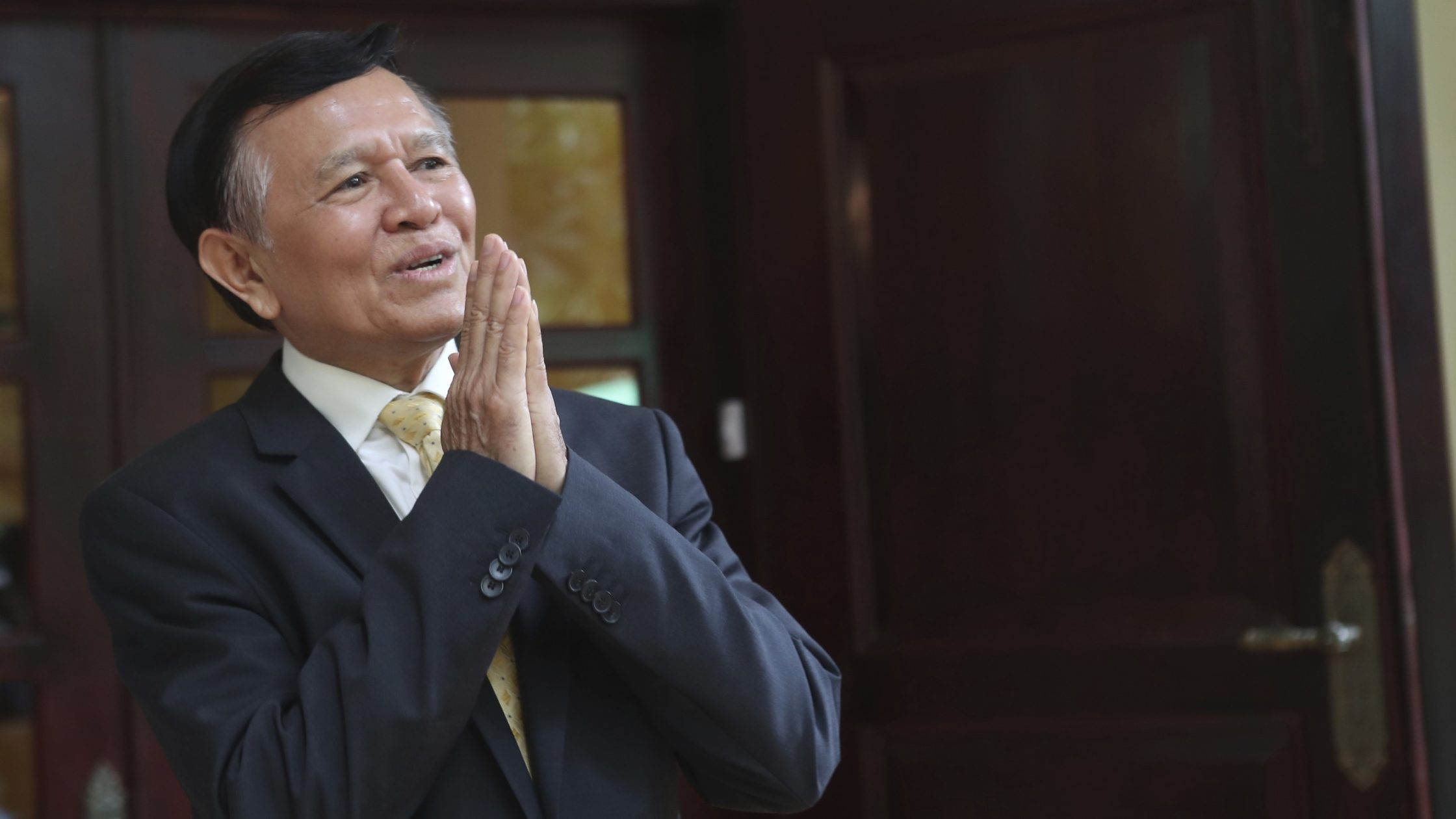 Cambodia should immediately drop “bogus” charges against opposition chief Kem Sokha, rights groups demanded Tuesday, the eve of a planned two-day treason trial in a case they said will be overseen by a politically controlled judiciary beholden to Prime Minister Hun Sen’s government.

Phil Robertson, deputy Asia director of New York-based Human Rights Watch (HRW), said Cambodia National Rescue Party (CNRP) president Kem Sokha will be “the victim of a staged trial on completely bogus treason charges” when proceedings at the Phnom Penh Municipal Court get underway on Wednesday, and that the government should “cut their losses by dropping the charges against him.”

“But clearly Prime Minister Hun Sen decided instead to extract the proverbial pound of flesh from Kem Sokha for daring to challenge him,” he said in a statement of the opposition leader, who faces up to 30 years in prison if found guilty.

“The reality is Kem Sokha did nothing he should have been charged for and this entire pre-trial prison detention, house arrest and now trial has been a massive violation of his human rights. Sadly, there’s no hope Cambodia’s politically controlled judiciary will dare do anything to call into question the paucity of the prosecutors’ case or the sheer injustice of the proceedings.”

Kem Sokha, 66, was arrested in September 2017 and charged with treason over a video recorded four years earlier in which he discusses a strategy to win power at the ballot box with the help of U.S. experts, although he maintains his innocence and his lawyers have said that prosecutors lack evidence to convict.

Two months after Kem Sokha’s arrest, Cambodia’s Supreme Court dissolved the CNRP for its role in the alleged plot and banned 118 of its officials from political activities.

The move to dissolve the CNRP was part of a wider crackdown by Hun Sen on the political opposition, NGOs, and the independent media that paved the way for his ruling Cambodian People’s Party (CPP) to win all 125 seats in parliament in the country’s July 2018 general election.

Robertson slammed a last minute registration requirement for courtroom monitors as “the icing on the cake of this sham trial,” noting that of a maximum 30 available seats, 23 will be reserved for diplomatic officials. Four senior members of the CNRP told RFA’s Khmer Service on Tuesday that the court had denied their request to attend the trial.

“Even now, the government is playing games with foreign governments, deciding on [who] will get a seat to the show, while also achieving its objective of limiting reporting by independent journalist and human rights NGOs,” he said.

“By capping the number of observers in court, Cambodia is damaging Kem Sokha’s rights by keeping most of the public out of what is supposed to be a public trial.”

Robertson’s concerns were echoed on Tuesday in a statement by London-based Amnesty International, whose regional director Nicholas Bequelin said that after two years held in “arbitrary detention,” authorities have yet to present “a shred of credible evidence to support a charge of treason.”

“The non-existent crime was politically manufactured to further the suppression of the opposition party,” Bequelin said. “The Phnom Penh Court must acquit Kem Sokha to bring an end to this mockery of justice.”

Bequelin dismissed the allegations against Kem Sokha as lacking a basis in facts and law, calling it a “concocted narrative” and “a front for the systematic denial of the rights to freedom of association and expression of millions who support the CNRP” who are suffering at the hands of a “weaponised” criminal justice system.

“Kem Sokha’s charges must be voided and the rights of CNRP members must be fully respected to enable them to freely participate without discrimination in Cambodia’s political life once again,” he said.

Bequelin also slammed Cambodian authorities for placing restrictions on who can observe Kem Sokha’s trial, saying they are working to limit scrutiny of the proceedings.

“The gravity of these absurd accusations demands that the authorities uphold the highest standards of fairness and transparency, which requires holding a public hearing,” he said.

“It is essential that human rights monitors and journalists are given unhindered access to the trial.”

Both HRW and Amnesty International noted that Kem Sokha’s case is of particular import to the European Union, which has called for his release and a host of improvements to Cambodia’s human rights situation ahead of a February decision on whether to withdraw the country’s tariff-free access to its markets under the “Everything But Arms” (EBA) scheme for developing nations.

“Given the shoddy, rights abusing way the government has treated Kem Sokha, and the government’s failures to make any serious progress on other rights issues, the EU will be fully justified if it takes harsh action next month to enforce the human rights provisions contained in the EBA agreement,” HRW’s Robertson said.

Kem Sokha’s attorneys said Tuesday that a court official had informed them the trial could take up to three months, which would mean the case could still be ongoing by the time the EU makes a final decision on the EBA next month.

Independent political analyst Kim Sok told RFA that a trial like Kem Sokha’s needs time to conduct fairly, saying that if it wraps up within the allotted two days “it means everything was prepared [by the court] ahead of time.”

Koul Panha, the former executive director of and currently an advisor to local electoral watchdog Comfrel, said he expects the government will have Kem Sokha’s trial delayed “for a long time” so that the CPP can “use his case for political negotiation with the opposition to appear that they are easing political tensions when they are pressured by the international community.”

“Delaying the court hearing would provide many advantages to the ruling party, including more opportunities to negotiate with the EU to maintain EBA status,” he said.