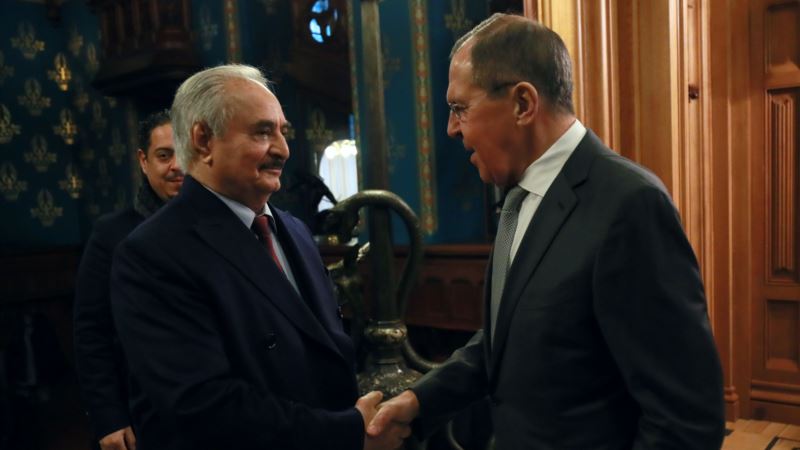 Haftar, the commander of Libya’s self-styled Libyan National Army (LNA), and the head of the UN-recognized Government of National Accord (GNA) in Tripoli, Fayez al-Sarraj, had travelled to the Russian capital on January 13 for peace talks.

The two rivals didn’t meet directly but their delegations held about seven hours of closed-door talks with top diplomats and military officials from Russia and Turkey.

In the evening, Russian Foreign Minister Sergei Lavrov and his Turkish counterpart, Mevlut Cavusoglu, said Sarraj had signed a draft truce agreement but that Haftar requested more time to consider it.

A tentative cease-fire that came into force on January 12 saw a lull in heavy fighting and air strikes in Libya, although both sides have accused each other of violating it as skirmishes continued around the capital.

During a visit to Sri Lanka on January 14, Lavrov said Moscow will continue pushing for a permanent agreement.

“We will pursue our efforts in this direction. For now a definitive result has not been achieved,” the minister said at a press conference.

Libya has been torn by violence since longtime ruler Muammar Qaddafi was deposed and killed in 2011.

The country has two rival administrations: the UN-backed GNA in Tripoli and Haftar’s in the city of Tobruk.

The GNA is supported by NATO-member Turkey and its ally Qatar. Turkish President Recep Tayyip Erdogan announced earlier this month that he had dispatched military elements to Libya to ensure stability for the GNA.

UN experts and diplomats say that Russian military contractors in recent months have deployed alongside Haftar’s LNA, which has also received air support from the United Arab Emirates and backing from Jordan and Egypt.

Turkey and Russia have both been criticized by UN and Western officials who say their efforts to arm their allies have led to an intensification of the violence.

With reporting by AFP and TASS