The United States is relying more heavily on illegal unilateral coercive measures (also known as economic sanctions) in place of war or as part of its build-up to war. In fact, economic sanctions are an act of war that kills tens of thousands of people each year through financial strangulation. An economic blockade places a country under siege.

A recent example is the increase in economic measures being imposed against Iran, which many viewed as more acceptable than a military attack. In response to Iran retaliating for the assassination of General Qassem Soleimani and seven other people, Iran used ballistic missiles to strike two bases in Iraq that house US troops. President Trump responded by saying he would impose more sanctions on Iran. Then he ended his comments by urging peace negotiations with Iran. The United States needs to understand there will be no negotiations with Iran until the US lifts sanctions that seek to destroy the Iranian economy and turn the people against their government.

The sanctions on Iran have been in place since the 1979 Iranian Revolution, which made that country independent of the United States. Iran is not the only country being sanctioned by the United States. Samuel Moncada, the Venezuelan ambassador to the United Nations, speaking to the summit of the Non-Aligned Movement of 120 nations on October 26, 2019, denounced the imposition of sanctions by the US, as “economic terrorism which affects a third of humanity with more than 8,000 measures in 39 countries.”

It is time to end US economic warfare and repeal these unilateral coercive measures, which violate international law. 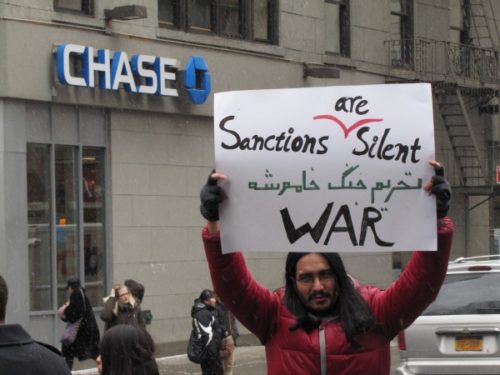 Sanctions are war (From havaar.org.)

Sanctions Are A Weapon of War

The United States uses sanctions against countries that resist the US’ agenda. US sanctions are designed to kill by destroying an economy through denial of access to finance, causing hyperinflation and shortages and blocking basic necessities such as food and medicine. For example, sanctions are expected to cause the death of tens of thousands of Iranians by creating a severe shortage of critical medicines and medical equipment everywhere in Iran.

Muhammad Sahimi writes that in a “letter published by The Lancet, the prestigious medical journal, three doctors working in Tehran’s MAHAK Pediatric Cancer Treatment and Research Center warned that, ‘Re-establishment of sanctions, scarcity of drugs due to the reluctance of pharmaceutical companies to deal with Iran, and a tremendous increase in oncology drug prices [due to the plummeting value of the Iranian rial by 50–70%], will inevitably lead to a decrease in survival of children with cancer.’”

Diabetes, multiple sclerosis, HIV/AIDS, Parkinson’s, Alzheimer’s, and asthma affect over ten million Iranians who will find essential medicines impossible to get or available only at high prices. The US claims that food and medicines are excluded from sanctions but in practice, they are not because pharmaceutical companies fear sanctions being applied to them over some technical violation and Iran cannot pay for essentials when banks can’t do business with it. European nations failed to persuade the Trump administration to ensure that essential medicine and food were available to Iranians.

In Venezuela, due to the sanctions, 180,000 medical operations have been canceled and 823,000 chronically ill patients are awaiting medicines. The Center for Economic and Policy Research found sanctions have deprived Venezuela of “billions of dollars of foreign exchange needed to pay for essential and life-saving imports,” contributing to 40,000 total deaths in 2017 and 2018. More than 300,000 Venezuelans are at risk due to a lack of access to medicine or treatment. Economists warn US sanctions could cause famine in Venezuela. Sanctions also cause shortages of parts and equipment needed for electricity generation, water systems, and transportation as well as preventing participation in the global financial market. Sanctions, which are illegal under the UN, OAS and US law, have caused mass protests in Venezuela against the US.

Sanctions against Iran and Venezuela could be a prelude to military attack; i.e., the US weakening a nation economically before attacking it. This is what happened in Iraq. Under pressure from the United States, on August 2, 1990, the UN Security Council passed sanctions that required countries to stop trading or carrying out financial transactions with Iraq. President George H.W. Bush said the UN sanctions would not be lifted “as long as Saddam Hussein is in power.” The US continued to pressure the increasingly skeptical Security Council members into compliance even though hundreds of thousands of children were dying. In 1996, then-U.S. Ambassador to the UN Madeleine Albright was asked about the death of as many as 500,000 children due to lack of medicine and malnutrition exacerbated by the sanctions, and she brutally replied, “[The] price is worth it.” Sanctions were also used against Libya and Syria before the US attacked them.

This is consistent with the US ‘way of war’ described by Roxanne Dunbar-Ortiz in “An Indigenous Peoples’ History of the United States,” which describes frontier counterinsurgency premised on annihilation including the destruction of food, housing, and resources as well as ruthless militarism. The US has waged a long-term economic war against Cuba (sanctions in place since 1960), North Korea (first sanctions in the 1950s, tightened in the 1980s), Zimbabwe (2003) and Iran (1979)

Sanctions hurt civilians, especially the most vulnerable – babies, children, the elderly and chronically ill – not governments. Their intent is to shrink the economy and cause chronic shortages and hyperinflation while ensuring a lack of access to finance to pay for essentials. The US then blames the targeted government claiming that corruption or socialism is the problem in an effort to turn the people against their government. This often backfires as people instead rally around the government, quiet their calls for democracy and work to develop a resistance economy. 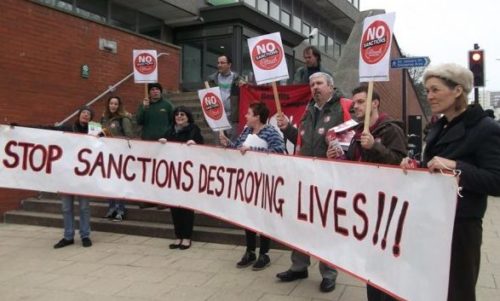 The Movement to End Sanctions

In recent years, a movement has been building to end the use of illegal economic coercive measures. The movement includes governments coming together in forums like the Non-Aligned Movement, made up of countries that represent 55 percent of the global population, as well as UN member-states calling for international law and the UN Charter to be upheld and social movements organizing to educate about the impact of sanctions and demand an end to their use. This June, the Non-Aligned Movement called for the end of sanctions against Venezuela.

Popular Resistance is working with groups around the world on the Global Appeal for Peace, an initiative to create a worldwide network of people and organizations that will work together to oppose the lawless actions of the United States, and any country that acts similarly. A high priority is opposing the imposition of unilateral coercive economic measures that violate the charter of the United Nations. The UN and its International Court of Justice have been ineffective in holding the US accountable for its actions. No one country or one movement has the power alone to hold the United States accountable, but together we can make a difference. Join this campaign here.

With 39 countries targeted with sanctions, and other countries impacted because they cannot trade with those countries, nations are challenging the US’ dollar domination. Countries are seeking to conduct trade without the dollar and are no longer treating the US dollar as the world’s reserve currency while also avoiding Wall Street. The de-dollarization of the global economy is a boomerang effect that is hastening due to the abuse of sanctions and will seriously weaken the US economy.

Foreign Minister Zarif, who describes sanctions as “economic terrorism,” warned that “the excessive use of economic power by the United States, and the excessive use of the dollar as a weapon in US economic terrorism against other countries, will backfire.”  As the blowback continues to grow, the negative impact on the US economy may force the US to stop using sanctions. The end of dollar domination will add to the demise of the failing US empire. 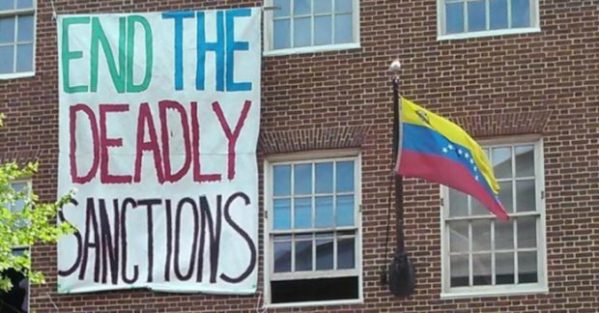 End the Deadly Sanctions banner on the Venezuelan Embassy in Washington, DC. (From the Embassy Defense Collective.)

Time to End the Use of Illegal Economic Sanctions

The combination of countries acting against US sanctions, and people’s movements pressuring the US government has the potential to end the abuse of sanctions. The EU has moved to blunt the impact of the sanctions against Iran by creating an alternative to the US-controlled SWIFT system for trade. This is spurring the end of the dollar as the reserve currency. Some officials in the EU have called for retaliatory sanctions against the US.

Trump left a small opening for potential diplomacy with Iran that could lead to the end of sanctions against that country. Trump bragged about the US being the number one oil and gas producer, taking credit for an Obama climate crime, and therefore no longer needing to spend hundreds of millions a year to have troops in the Middle East. He concluded with a message to the “people and leaders of Iran” that the US was “ready to have peace with all those who seek it.” He said the US wanted Iran to have a “great and prosperous future with other countries of the world.”

That future is only possible if the US moves to end the sanctions against Iran. Iranians have learned the US cannot be trusted. Iran lived up to the requirements of the Iran nuclear deal, the Joint Comprehensive Plan of Action, but Trump did not when he withdrew from it and re-instated draconian sanctions lifted by Obama. Trump added even move sanctions. This also angered European allies who had negotiated the agreement and were put in the position of being subservient to the US or going against it. To regain Iran’s trust, the US needs to make a good-faith gesture of ending punitive economic measures.

North Korea, which has been sanctioned by the US longer than any other country, had a similar experience after they reached an agreement with the United States in 1994 under the Clinton administration.  The George W. Bush administration wanted to put in place a national missile defense system but the agreement with North Korea blocked that. John Bolton and Dick Cheney falsely accused North Korea of violating the agreement, increased sanctions against it and claimed it was part of the Axis of Evil, along with Iran, and Iraq. North Korea, like Iran, learned they cannot trust the United States. Sanctions are causing thousands of deaths in North Korea. Now, China and Russia are allied with North Korea and are urging relief from the US sanctions. Russia and China have also ignored US sanctions against Venezuela and continue to do business with it.

On December 17, the Senate passed a Sanctions Bill that put in place sanctions against corporations working with Russia to develop gas pipelines to Europe. The action is naked US imperialism seeking to prevent Russia from being the main natural gas exporter to the EU market and to replace it with more expensive US-produced gas, a move to save the financially-underwater US fracking industry. Russia, Germany, and others have defiantly told Washington its weaponizing of economic sanctions will not halt the gas pipeline construction.

The indiscriminate, illegal and immoral use of sanctions is an act of war. Unless they are authorized by the United Nations, unilateral coercive measures are illegal. A critical objective of the peace and justice movement in the United States, working with allies around the world, must be to end this terrorist economic warfare. The US economy currently depends on financial hegemony and war. The slow, steady collapse of the dollarized economy means the 2020s will be the decade US domination comes to an end. The US must learn to be a cooperative member of the global community or risk this isolation and retaliation.