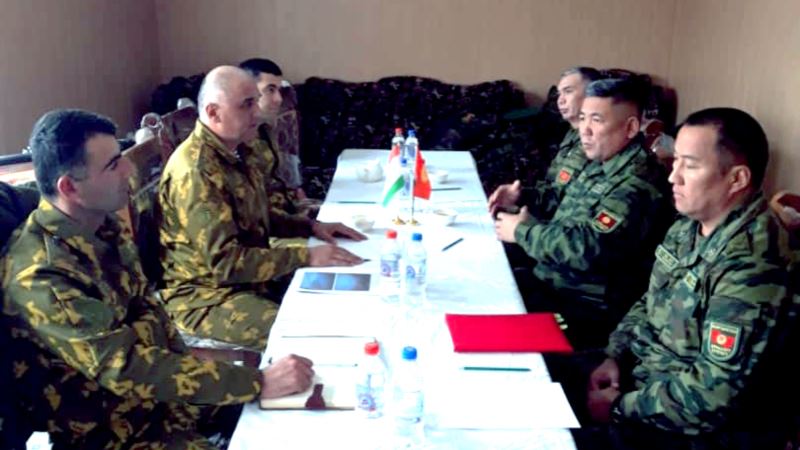 BATKEN, Kyrgyzstan — Kyrgyz and Tajik officials have agreed to start the process of a land swap along a disputed segment of the border between the two Central Asian nations after years of sometimes deadly clashes.

The talks were held in Tajikistan’s Isfara region, near the Tajik village of Guliston and the Kyrgyz village of Kyzyl-Bel in the southern Batken region, following another round of violence between Kyrgyz and Tajiks residing near the border.

Razakov said the sides signed a joint protocol, according to which a joint working group by February 15 will attempt to agree on the line of demarcation of the 114-kilometer border segment. March 1 they aim to define areas “equal by size and significance” for exchange.

Gunshots fired along the border on January 9 were the latest illustration of simmering tensions in the region.

Kyrgyz officials have said they were fired from the Tajik side, prompting the brief evacuation of 254 Kyrgyz nationals, including 139 children, from a village near the location of the clashes. No casualties were reported.

The Kyrgyz Foreign Ministry summoned the Tajik ambassador over the incident, while the Tajik side blamed residents of a Kyrgyz village for provoking the unrest.

On January 11, authorities in the Batken region arrested four local residents, who allegedly took part in the clashes, and charged them with hooliganism and taking part in mass disorder.

On January 15, dozens of activists rallied in central Bishkek, demanding immediate release of the four arrested persons and urging Razakov to resign.

The segment of the Kyrgyz-Tajik border where the incident took place has seen similar clashes in the past, including at least 10 skirmishes last year.

In December, six Kyrgyz nationals and three Tajik nationals were wounded in clashes in the area, while violence in September claimed four lives.

Many border areas in the former Soviet republics in Central Asia have been disputed since the collapse of the Soviet Union in 1991.

The situation is particularly complicated near the numerous exclaves in the volatile Ferghana Valley, where the borders of Tajikistan, Uzbekistan, and Kyrgyzstan meet.