A video of a man talking about violence at Jawaharlal Nehru University (JNU) and protests against the Citizenship Amendment Act (CAA) is being shared with the claim that he is BJP MLA, Anil Upadhyay. The man questions if anyone has the guts to raise their voice against Home Minister Amit Shah. “Show me one journalist who has spoken about the violence in JNU and Jamia,” he says adding, “If anyone speaks against Modi, for now (we) have just entered in colleges and beaten up, has anyone been able to do anything and if (you) speak more then we will enter your house and smack you down and finish your life.” The statement comes across a threat allegedly given by a BJP MLA.

One Khurshid Alam Ab has shared the video on Facebook with the same narrative. 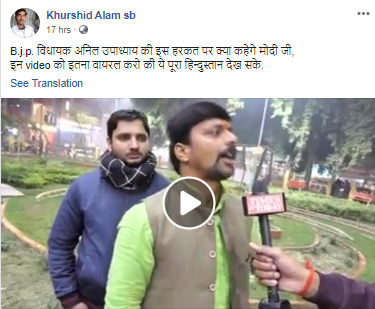 Another video is doing the rounds on social media along similar lines – that he is BJP MLA Anil Upadhyaya. However, in this video, the man is criticising the government and calling for Hindu-Muslim brotherhood. “We’ll celebrate Eid, Bakri Eid, Diwali and Holi,” he says, adding that this country belongs to everyone. “This is BJP MLA Anil Upadhyay. What is Narendra Modi saying about his speech? (translated)”, reads the message shared along with the video. A Facebook user shared the video with the same claim.

In the fact-check, we will debunk the two videos separately.

The man in the video is Harish Mishra, a former district president of Seva Dal which is a grassroots frontal organization affiliated with the Indian National Congress (INC). Alt News had earlier debunked a video of Mishra in November 2019, when it was shared with the narrative that a BJP leader was threating a journalist about reporting against the government. However, the complete video makes it evident that Mishra is a BJP critic and not a supporter. BOOM spoke to Rajeshwar Singh Patel, Varanasi district president and confirmed that Mishra is an active member with the Congress.

A close look at the video reveals a logo of a news organization on the top left corner of the screen which reads “DS4 News”. Alt News found the complete video posted on the outlet’s YouTube channel, uploaded on December 24, 2019.

At 5:36 mins in the video, the reporter can be heard identifying the man as Pankaj Srivastav. Thus, the man in the video is not BJP MLA ‘Anil Upadhyay’. Srivastav criticizes the government on issues ranging from the Citizenship Amendment Act to women’s safety and inflation. DS4 News confirmed to fact-checking outlet Fact-Crescendo that Srivastav is an ordinary citizen who had come to protest at Raj Ghat, New Delhi. Moreover, we found a live video of protests where Pankaj Srivastav was introduced as a prominent voice on social media. 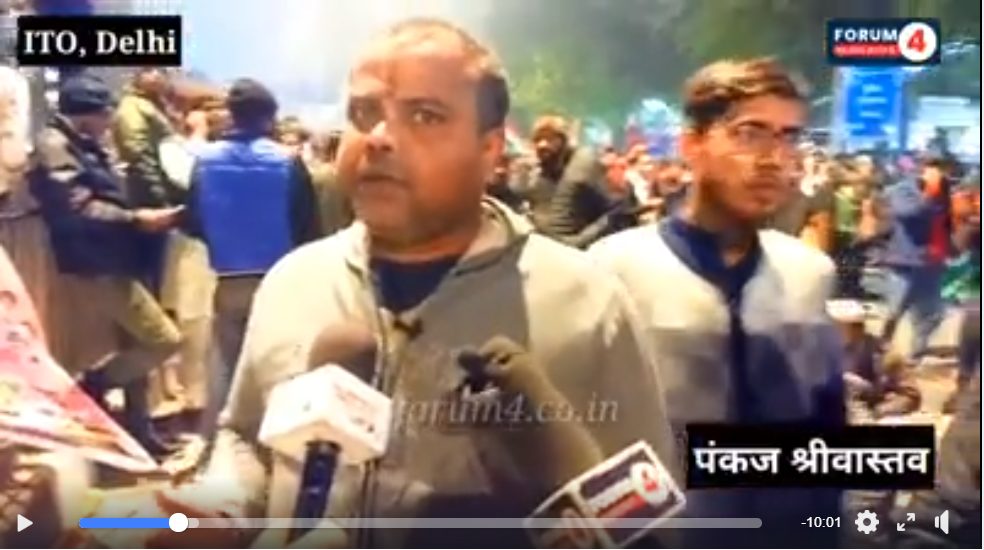 ‘Anil Upadhyay’, has emerged as a recurring name used to propagate misinformation. However, quite amusingly, no such MLA exists in any state assembly or the parliament, according to MyNeta database. The name crops up on social media sometimes as a BJP MLA, and sometimes as a Congress MLA. Posted below is a screenshot of the search result on MyNeta website.

Two unrelated videos – one of Congress member sarcastically criticising the BJP government and a video of a common citizen voicing his opinion against the Citizenship Act – were falsely shared as that of BJP MLA ‘Anil Upadhyay’.

Donate to Alt News!
Independent journalism that speaks truth to power and is free of corporate and political control is possible only when people start contributing towards the same. Please consider donating towards this endeavour to fight fake news and misinformation.Donate NowTo make an instant donation, click on the “Donate Now” button above. For information regarding donation via Bank Transfer/Cheque/DD, click here.
Print