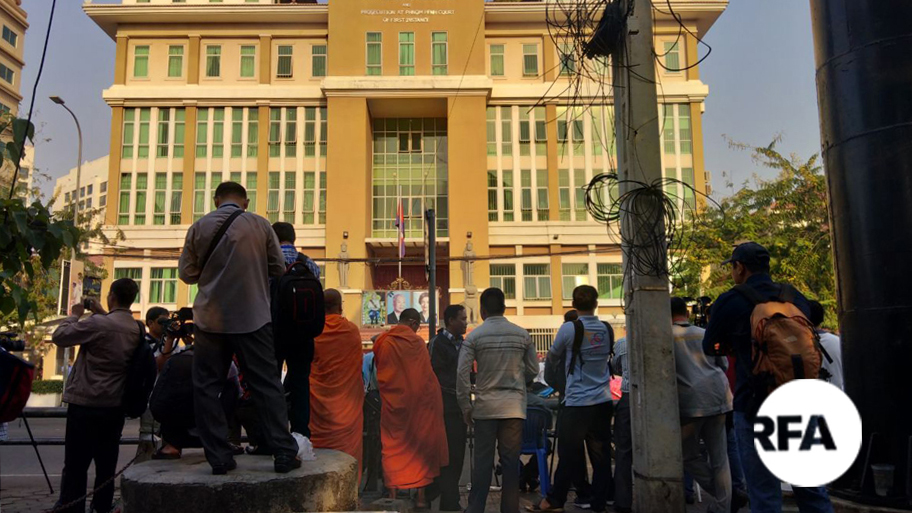 A court in Cambodia held the second day of hearings in the treason trial of opposition leader Kem Sokha on Thursday, as the defendant’s party decried what it called a “political show” orchestrated by the government and authorities came under fire for refusing observers access to the proceedings.

On day two of the trial, prosecutors at the Phnom Penh Municipal Court focused on what they said were activities Kem Sokha undertook from 1993-2007 that amounted to “conspiracy with foreign powers,” the Cambodia National Rescue Party (CNRP) president’s lawyer, Meng Sopheary, told RFA’s Khmer Service.

“Kem Sokha has said he did not invite any countries to invade Cambodia or cause Cambodia to lose its sovereignty or submit to a foreign invasion,” she said.

“He held official positions at the Senate and National Assembly [parliament], and ran the Cambodian Center for Human Rights from 1993 until 2007.”

Meng Sopheary noted that the article in Cambodia’s criminal code related to “conspiracy with foreign powers” did not even go into effect until 2010, and said the court has no right to try him for any alleged crimes committed prior to that year.

“Kem Sokha is a democrat—he wouldn’t do anything that would harm the nation,” she added.

On Wednesday, prosecutors showed a two-minute clip of a video they say is proof that Kem Sokha colluded with the U.S. to try to overthrow Cambodia’s government, but Meng Sopheary said at the time that the context of the full hour-long video was missing.

The video cited as evidence by the court was recorded in 2013 and shows Kem Sokha discussing a strategy to win power at the ballot box with the help of U.S. experts—though the U.S. Embassy had rejected any suggestion that Washington was interfering in Cambodian politics at the time of his arrest in 2017.

Kem Sokha, 66, was arrested in September 2017 and charged with treason over the video. He maintains his innocence and his lawyers have said that prosecutors lack evidence to convict.

Two months after Kem Sokha’s arrest, Cambodia’s Supreme Court dissolved the CNRP for its role in the alleged plot and banned 118 of its officials from political activities.

The move to dissolve the CNRP was part of a wider crackdown by Prime Minister Hun Sen on the political opposition, NGOs, and the independent media that paved the way for his CPP to win all 125 seats in parliament in the country’s July 2018 general election.

On Thursday, government lawyer Ky Tech echoed an earlier claim that he has “lots of evidence” against Kem Sokha, and that the CNRP chief “can’t avoid conviction.” Kem Sokha faces a maximum sentence of 30 years in prison if he is found guilty.

Ky Tech also said the day’s hearing had been “tense” and accused the defense of violating court procedures by asking questions in a bid to allow Kem Sokha to give a statement, when the prosecution should have been allotted time to question him.

The CNRP issued a statement on Thursday taking issue with the court’s handling of Kem Sokha’s case, in which it called the proceedings part of a “political show” organized by Hun Sen’s government to legitimize its dissolution of the opposition party.

The statement also called on the court to “drop all charges against Kem Sokha” and to “restore his full freedom without conditions.”

RFA was unable to contact a government spokesperson for a statement about the trial and Minister of Justice Chhin Malin declined to comment, saying he did not want to be accused of “interfering in the judicial process.”

Day two of the trial came as a group of 82 Cambodian nongovernmental organizations (NGOs) issued a joint statement called on the Phnom Penh Municipal Court to allow greater access to Kem Sokha’s trial proceedings, which were limited to 30 seats mostly reserved for diplomats, relatives, and CNRP members.

Specifically, the groups urged court authorities to provide a real-time broadcast of the trial so that members of the media and NGOs can monitor the hearings and to provide transparency.

“Many members of the public are interested in monitoring Kem Sokha’s case because they have yet to hear the evidence the court has brought against him,” the statement said.

Responding to the request for greater access, Minister of Justice Chhin Malin told RFA that even with limited space the court can “still provide a transparent trial.”

He suggested that reporters and NGOs “contact lawyers for comment,” adding that “participating in the hearings won’t help them to understand the case anyway, because it is so complicated.”

“[The NGOs] only expressed concerns because they were excited,” he said, without clarifying.

The U.S. Embassy in Cambodia also weighed in on access to the trial on Thursday with a statement calling on the court to allow journalists into the courthouse, according to local media.

“We are aware that court officials have excluded media and civil society members from the proceedings, and we have urged the court to allow them in,” Emily Zeeberg, a spokeswoman for the U.S. Embassy, told Cambodia’s Voice of Democracy.

“Freedoms of expression and the press, an active civil society, and tolerance of dissenting views are vital components of any democracy.”

Zeeberg also called on authorities to address the trial’s shortcomings and to adhere to guidelines in the country’s constitution that guarantee citizens the right to a fair trial.

Am Sam Ath, senior investigator with local rights group Licadho, told RFA that the court deliberately prevented the public and the media from participating the trial, adding that even with the limited number of seats, “there were many spaces available at the courtroom.”

“Many people seek the truth from Kem Sokha’s trial,” he said.

The CNRP president’s trial will reconvene on Wednesday and Thursday of next week.