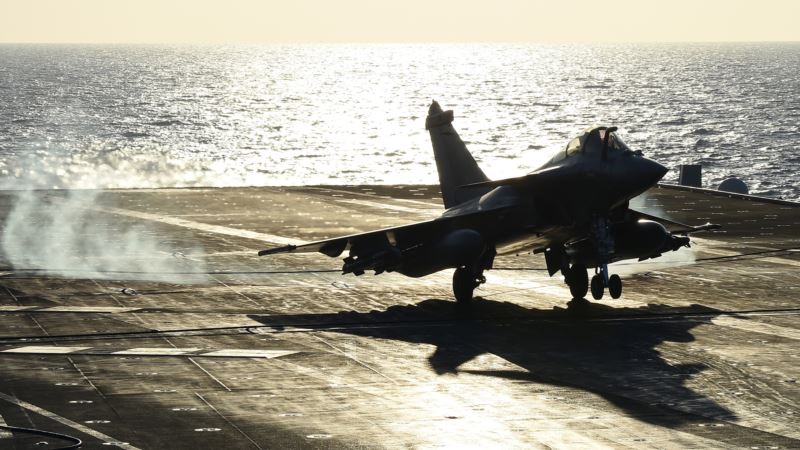 France will deploy its only aircraft carrier to join coalition operations against the Islamic State (IS) terror group, President Emmanuel Macron has announced.

“The aircraft carrier will support Chammal operations [in the Middle East] from January to April 2020 before deploying to the Atlantic Ocean and the North Sea,” Macron said in a New Year’s address to the French military.

Operation Chammal is the French component of the U.S.-led anti-IS mission in the Middle East.

Macron said the carrier, named the Charles de Gaulle, will be escorted by a European squadron that will include vessels from Germany, Belgium, the Netherlands, Spain, Portugal, and Greece.

Macron did not give the exact nature of the mission, but French warplanes have joined the fight against IS positions as part of the coalition, and there are some 1,000 French troops in the region.

The Charles de Gaulle also supported operations against IS for a month last year when Western-backed Kurdish forces overran the extremist group’s last stronghold in Syria.

The French president said his country’s forces would remain in the fight against IS, which has claimed responsibility for most of the terror attacks in France during 2015-16 that killed more than 230 people.

Macron said that while the group no longer holds set territory, “its menace remains, in another lurking, more insidious form.”

The anti-IS coalition scored big successes by driving the extremist group from nearly all the territory it gain in 2014 in Iraq and Syria.

But recent events have represented setbacks for the coalition.

Turkey invaded northeastern Syria in October to fight the Western-backed Kurdish forces that defeated IS extremists in the region, disrupting final cleanup operations and allowing some IS prisoners held by Kurdish forces to escape.

In Iraq, meanwhile, many coalition troops have pulled out of the country, at least temporarily, following raised tensions between the United States and Iran over the U.S. move to assassinate a top Iranian military commander.

With reporting by dpa, Reuters, and AFP