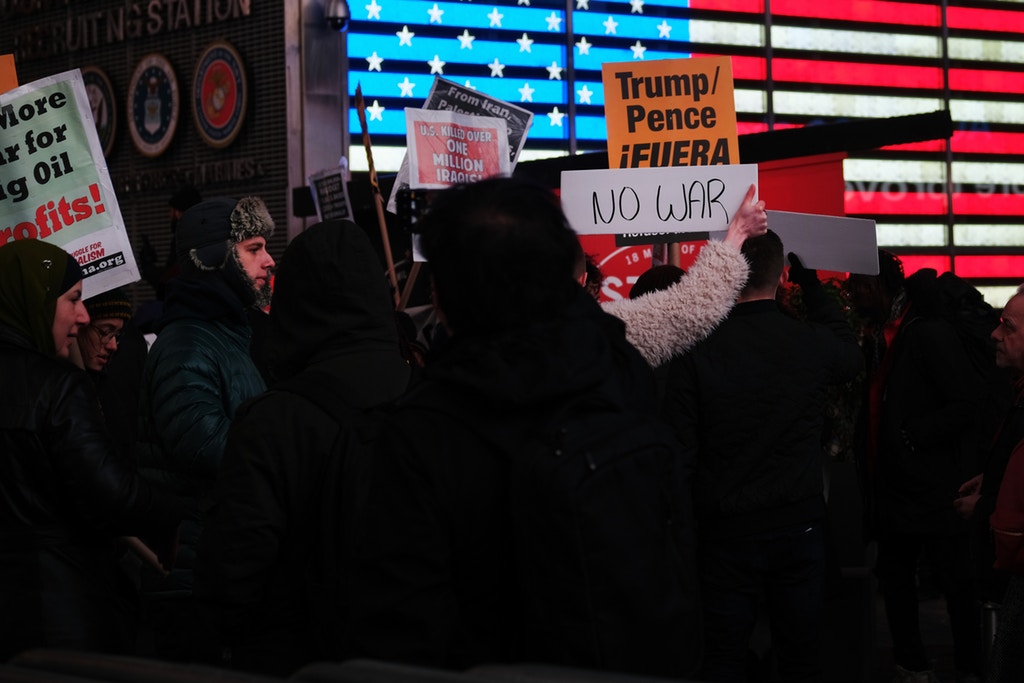 People participate in a protest in Times Square against military conflict with Iran on Jan. 8, 2020, in New York City.

Last week, following President Donald Trump’s illegal and unwarranted assassination of Iranian Maj. Gen. Qassim Suleimani, cities across the U.S. saw the stirrings of anti-war protests. Thousands rallied to oppose a full-fledged war with Iran — numbers far smaller than the millions who amassed to protest the 2003 invasion of Iraq, but not an insignificant showing. In the wake of some welcome de-escalation on the part of the Iranians and the Trump administration, the calls for mass anti-war mobilizations are already gaining less traction; a planned international day of anti-war protest on January 25 is unlikely to draw big crowds.
With the U.S. stepping back from the brink of another all-out war only to return to a status quo of elevated bellicosity, today’s would-be anti-war movement should reevaluate but not retreat. The work of international solidarity — and the need to situate anti-war activism in the broader struggle against social injustice and fascist Trumpian policy — cannot wait for the war drum to again rise to a deafening beat. Nor can a movement against the U.S. war machine and its $738 billion budget rely simply on the spectacle of mass marches to make effective interventions.

A path forward exists: the path of a true, solidarity-oriented mass movement coupled with direct action.

Without a declaration of war and invasion, without the sort of grand event of war and attendant presidential addresses, it’s hard to imagine building up the sort of vast response that constituted the movement against the Iraq War. But, as those of us who joined historically large marches in 2002 and 2003 painfully learned, even numbers did not translate to potency. And what sense, does it make to invoke the rhetoric of an “anti-war” position at a time when there can be war without war, through proxies, murderous sanctions, travel bans, and drone strikes in the service of oil pillages?

What’s more, today’s anti-war politics are complicated by factionalism on the left engendered by a series of complex conflicts, geopolitical developments, and internal factors in places like Iran — not to mention the politics of war in the U.S. itself.

These factors interact to create a treacherous landscape for any would-be anti-war movement. Often, they provide a roadmap of where not to go — how not to build an effective movement. Yet a path exists: the path of a true, solidarity-oriented mass movement coupled with direct action.

Let’s begin with the state of today’s anti-war movement in the U.S. Coming to the brink of war puts modest crowds into the streets. But the fracturing of the left over conflicts like Syria’s civil war has meant that these sorts of events don’t always center one of the most important qualities of a robust anti-war movement: solidarity. Indeed, for some — including a number of the speakers invited by the coalition Act Now to Stop War and End Racism, known as ANSWER, to speak outside the White House at a rally last week — the “anti-war” position all too easily collapses into supporting brutal regimes, like those of Syria and Iran, against violent U.S. regime change efforts.

This sort of rudimentary anti-imperialism, which finds heroes in any perceived target of scrambling U.S. hegemony, need not be our focus. Suffice it to say, an enemy’s enemy is not necessarily a friend.

The lesson here means recognizing, for instance, the way that Iranian citizens are oppressed and repressed by U.S. sanctions, which Trump is now worsening, and also by their own government. Mass protests across Iran against punishing cuts to fuel subsidies have been ongoing since November; the government has responded with internet blackouts and deadly anti-protest police and military violence. When working-class Iranian citizens and students are taking to the streets en masse to decry their government as a dictatorship, they are not inviting U.S. war-making and intervention, yet neither are they looking to American activists to express solidarity with Iranian state leadership.

In a recent n+1 essay, an Iranian journalist who, to protect their identity, goes by Matin told fellow journalist Nilo Tabrizy, upon hearing the announcement of three days of national mourning for Suleimani, “Iran was already in the middle of mourning those who’d been killed by our own government” during the recent unrest. There are ongoing and escalating anti-leadership protests in Tehran and other cities following the downing of a Ukrainian passenger plane by Iranian military missiles. The citizens of Iran, mobilizing to live in dignity and afford basic needs, are not best supported through hagiographies to the Iranian state. Anti-war solidarity must take a better form.

Then there are legislative and electoral routes to which U.S. activists can commit energies, say by supporting a true, lifelong anti-war candidate like Sen. Bernie Sanders, I-Vt., for example. Sanders has pledged to cut Pentagon budgets and, crucially, situates his anti-war stance in the class politics around which his campaign is organized. Echoing the famous position of socialist Eugene V. Debs, Sanders noted last week that military conflict is waged by the ruling class but fought — and suffered through — by the working classes.

In terms of legislation, Sanders, alongside Rep. Ro Khanna, D-Calif., last week introduced a bill to prohibit any funding for offensive military force in or against Iran without prior congressional authorization. Dozens of lawmakers have signed on and constituents can pressure their senators to take up this congressional limit on the erratic and reckless executive branch.

Yet it would be folly to wholly rely on progressive legislative plans to curtail U.S. war-making. Sanders and Khanna led efforts last year to similarly restrict military activity and end U.S. funding to Saudi Arabia’s devastating war in Yemen, only to see their measures stripped from the National Defense Authorization Act adopted with bipartisan support by Congress in December. The new bill may be doomed to the same fate and the administration’s ability to bypass Congress in matters of war, especially in the case of drone strikes, should not be underestimated.

In an election year, it’s difficult to remember that the horizon of political engagement goes beyond the ballot box. At the same time, when it comes to anti-war activism, those of us who came of age during the Iraq War protests have no model or memory of effectual action. We continue to join big, placid marches to express political allegiances. Defanged histories of U.S. protest movements tell us that big marches are what resistance looks like, from the civil rights struggle to opposition against the Vietnam War.

A mass march today, organized through Facebook or Twitter, often represents the extent and limit, rather than the potential, of a movement to mobilize participants.

Mass marches remain an important means through which to find allies and build communities, but, as I and others have previously noted, bringing hundreds of thousands of people to a mass march half a century ago was much harder without the tools of social media. Great numbers back then demonstrated powerful underlying capacities: If they can organize this, what else can they do? Meanwhile a mass march today, organized through Facebook or Twitter, often represents the extent and limit, rather than the potential, of a movement to mobilize participants; the mobilization is rightly seen as no threat to power operating as usual.

It’s not easy to know what — facing the U.S. regime of surveillance capital and militarized policing — a protest movement could look like that would be capable of forcing the government’s hand against continued and further war-making. I offer here just one example, raised last week by theorist and author Joshua Clover in Commune Magazine (where I am an editor): “It’s puzzlingly easy to forget that the first and most decisive win against Trump administration policies, contesting the so-called Muslim ban, derived not from public marches but decisive and distributed infrastructure shutdowns.” 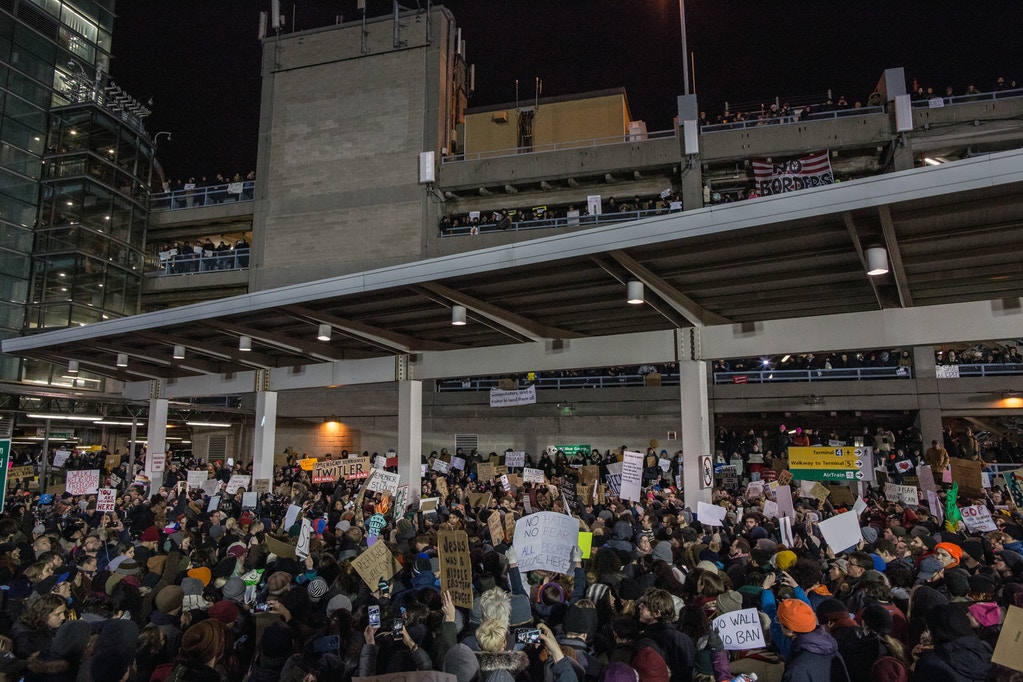 Protesters rally during a demonstration against the Muslim immigration ban at John F. Kennedy International Airport on Jan. 28, 2017, in New York City.

A Model For Action

On February 6, 2017, in immediate response to Trump’s announcement of the so-called Muslim ban on travel, thousands of protesters rushed to major U.S. airports. The mobilization began with just 30 people outside Terminal 4 of New York’s John F. Kennedy International Airport, where two Iraqis were being detained by Customs and Border Protection. By nightfall, the airport and others around the country were flooded with demonstrators; New York City taxi cabs refused to pick up or deliver passengers at Kennedy. And district judges in New York City, Massachusetts, Virginia, and Washington state had blocked parts of Trump’s executive order.

The success was temporary: The judges’ rulings were eventually overturned, and a slightly watered down but still racist and vicious travel ban was upheld by the Supreme Court. Leaks from the White House just days ago revealed plans to dramatically expand the travel ban to more countries’ citizens, although the reports did not reveal which countries. The lesson here is that there are no complete victories — at least not yet — but victories can be achieved nonetheless.

As it stands, the administration’s intolerable border policies constitute deadly aggressions against the very people with whom anti-war activists claim to be in solidarity, including Iranians, Iraqis, and Yemenis. After the recent elevation of conflict with Iran, The Intercept reported that dozens of Iranian families, including American citizens, were detained and questioned for hours at the U.S.-Canada border. Yet we who would march against war have not returned to airports and border stations en masse; we have not taken significant, focused aim against the U.S. deportation and border regime.

Any stand against U.S. imperialism need not wait for more military strikes against Iran to act. We must mobilize now to prioritize solidarity with the refugees that decades of U.S. war-waging has helped produce; any anti-war movement worth its salt must therefore be a movement for opening our borders too. The direct action that shut down airport functions that February day, briefly disrupting the infrastructure of Trump’s disgraceful foreign policy, is an example to remember and repeat. It is, to say the least, a place to start.