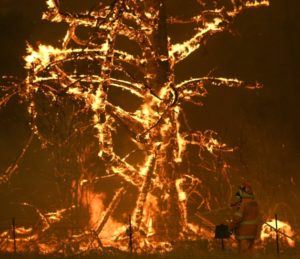 They are disgruntled and have every right to be. Whatever one’s feelings about tennis, expecting athletes to perform in subpar conditions is a rank matter that should see officials taken to task. But administrators of a game are often distant from the practice of the game itself. Being on different, cognitive paths, the players can be left stunned by decisions that have the estranging effect of being made in committee.

The pressing issue at the Australian Tennis Open this year is the air quality that has had a ruinous effect on wildlife. Australia’s unprecedented summer of conflagration, marked by plumes so expansive they are moving out across the Pacific, was bound to affect sporting tournaments. On Tuesday, a warning advising people to stay indoors in Melbourne was issued. This did not prevent spectators making their way to Melbourne Park, equipped with breathing masks. Nor did it prevent players from taking to the courts to do battle.

The first casualty was Slovenian player Dalila Jakupović, ranked 210 by the Women’s Tennis Association. With some reluctance, the plucky player withdrew from her qualifying match on Monday against Switzerland’s Stefanie Vögele. Coughing fits had become impossible to ignore. “It was very dangerous to play in those conditions yesterday,” she subsequently said. Nor did it stop with her. “I think all of the players yesterday suffered more than the ones playing today because not all matches are going to be finished today.” Players complained of “headaches”, “chest pains” and breathing problems.

Canada’s Eugenie Bouchard and Australia’s own Bernard Tomic also faced delays during their sessions. “I’m never one to stop playing,” Bouchard would claim, “but I definitely started felling unwell and I had to call the trainer because it was tough to breathe and I felt a bit nauseous.” The spectacle of Bouchard suffering and her opponent, Xiaodi You, being reduced to near immobility, said much of an increasingly absurd spectacle.

All of this left Bouchard perplexed. “It’s not healthy for us. I was surprised, thought we would not be playing today but we don’t have much choice.” She insisted in her explanation to ABC News that she was a hardened professional, not asthmatic and more than capable.

Other matches have been abandoned. An exhibition match between Maria Sharapova and Germany’s Laura Siegemund was called off after both players felt distinctly off with respiratory issues.

The players have been less than impressed. Ukraine’s world No. 5 Elina Svitolina was eyeing the World Air Quality Index, and revealed her concerns on Twitter. “Why do we need to wait for something bad to happen to do an action”? American Nicole Gibbs felt cheated, wondering if she had played in hazardous conditions without being sufficiently informed. Others like Britain’s Harriet Dart were careful before going out on court, mindful of staying indoors.

For all these utterances, few came close in incandescent rage than Liam Brody’s determined salvo. “The more I think about the conditions we played in a few days ago,” he fumed, “the more it boils my blood. We can’t let this slide.” Most off-putting for Brody was the email from both the ATP and AO, deemed “a slap in the face”. “Citizens of Melbourne were warned to keep their animals indoors the day I played qualifying, and yet we were expected to go outside for high intensity physical competition?”

Within Brody’s revolt lies the broader problem with lower ranked tennis players. When they splutter and suffer on the courts, the protective padding is nowhere to be seen. Where, posed Brody, “is the protection for players , both male and female?” Canadian player Vasek Pospisil seconded the idea of a player’s union. Fellow countryman Brayden Schnur insisted that establishment stars such as Rafael Nadal and Roger Federer needed to take the lead and escape their sponsorship cocooned Nirvana. “It’s got to come from the top guys.” A swipe of some pettiness duly followed. “Roger and Rafa are a little bit selfish in thinking about themselves and their careers.”

This Australian Open seems to be coming full circle, linking ecological disaster to matters of health and elite players who collect their sponsorship moneys without asking too many questions. Squeaky clean Federer has found himself in the cross fire of the climate change skirmishes, criticised for leaving his wallet open for the likes of Credit Suisse, a company with an extensive portfolio of shares in fossil-fuel industries. His cool and polished counter, largely directed at climate change activist Greta Thunberg, claimed that he took “the impacts and threat of climate change very seriously” and appreciated “reminders of my responsibility as a private individual”. The choking fires in Australia had also moved him and his family.

The response from AO officials has been laced with smidgens of callousness layered by indifference. There are no emergency measures of the sort taken by Beijing just prior and during the 2008 Olympic games. (These, as researchers found on closer inspection, led to improvements in cardiovascular health.) Australian Open tournament director and Tennis Australia chief executive Craig Tiley is using an old trick: nothing to worry about; the experts have it all in hand. “This is a new experience for us all, how we manage air quality and therefore we have got to rely on those experts that advise us how best to continue.”

Air-quality testing boffins, he tried to reassure sceptics, had been busy, including environmentalists, scientists and meteorologists. Criticism of the conditions could be put down to ignorance. “Air quality is a very complex and confusing issue.” No pressing concerns had been registered by such bodies as the Environmental Protection Authority.

None of the options for sporting officialdom are appealing. In the name of health, postponement and cancellation are serious options. But all of this requires a degree of selfless professionalism that is not in evidence so far. Perhaps Svitolina is right: something drastically harmful will need to manifest before something is actually done. Tiley prefers to be fatalistic. Such conditions would have to come to be accepted over time. “It is potentially the new normal.”