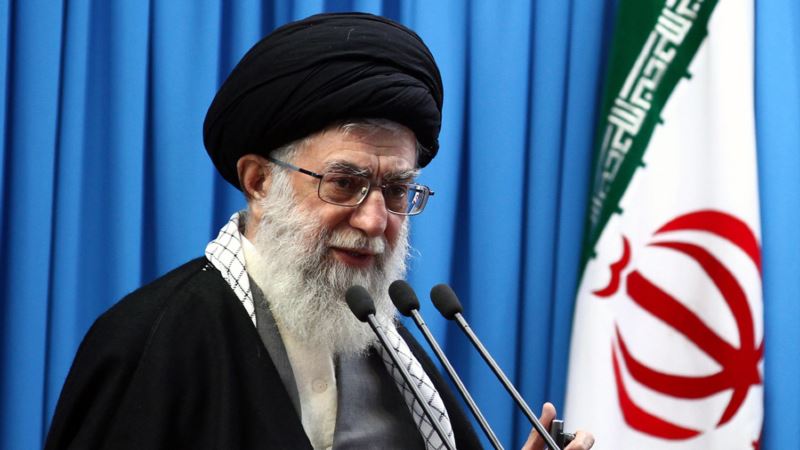 Iran’s Supreme Leader Ayatollah Ali Khamenei is expected to lead Friday Prayers in Tehran for the first time in eight years, in the wake of angry protests over the downing of a Ukrainian passenger airliner by Iran’s air defenses last week.

It quoted officials as saying that “the Iranian nation will once again demonstrate their unity and magnificence,” without linking the event to the current situation.

The Ukraine International Airlines (UIA) Boeing 737-800 had just taken off from Tehran en route to Kyiv on January 8 when it crashed, killing all 176 people on board. Most of the victims were Iranian and Canadian nationals, with smaller numbers of Ukrainians, Afghans, Swedes, Britons, and Germans.

Iranian authorities initially denied any responsibility, but three days after the tragedy the Islamic Revolutionary Guards Corps (IRGC) admitted the plane was shot down “unintentionally.”

The tragedy occurred hours after Iran fired ballistic missiles at two bases housing U.S. forces in Iraq, in response to the killing of top Iranian commander Qasem Soleimani in a U.S. drone strike in Baghdad.

Iran’s January 11 admission it had downed the Ukrainian plane led to days of protests in Tehran and other Iranian cities, with demonstrators chanting slogans against Iran’s clerical leadership.

Earlier this week, President Hassan Rohani appealed for national unity, and called on the military to give a full account of how the plane was shot down.

Rohani also said the investigation should be overseen by a “special court,” insisting that all those responsible for the “unforgivable error” must be “punished.”

Foreign Minister Mohammad Javad Zarif acknowledged that Iranians had been “lied to” for days, but claimed that he and Rohani only found out the truth concerning the cause of the disaster two days after the aircraft was shot down.

Iran’s judiciary has said several people had been arrested over the plane crash, as well as around 30 protesters.

Meanwhile, the five countries that lost citizens in the downing of the Ukrainian airliner have put pressure on Iranian authorities to give a full accounting of what happened.

After meeting in London on January 16, the foreign ministers of Afghanistan, Britain, Canada, Sweden, and Ukraine demanded that Tehran hold a “thorough, independent, and transparent” investigation.

Canadian Foreign Minister Francois-Philippe Champagne said all those responsible must be brought to justice.

“The eyes of the international community are on Iran today,” he said.

The Iranian leadership is also facing growing domestic and international pressure on other fronts: the country’s 2015 nuclear deal with world powers appears close to collapse and its economy is struggling under crippling U.S. sanctions.

In November 2019, anti-government protests erupted in more than 100 Iranian cities after an announcement of gasoline rationing and price hikes.

The last time Khamenei delivered a Friday sermon in Tehran was in February 2012 on the 33rd anniversary of the country’s Islamic Revolution and at a time of crisis over Iran’s nuclear program.

With reporting by the BBC and AFP