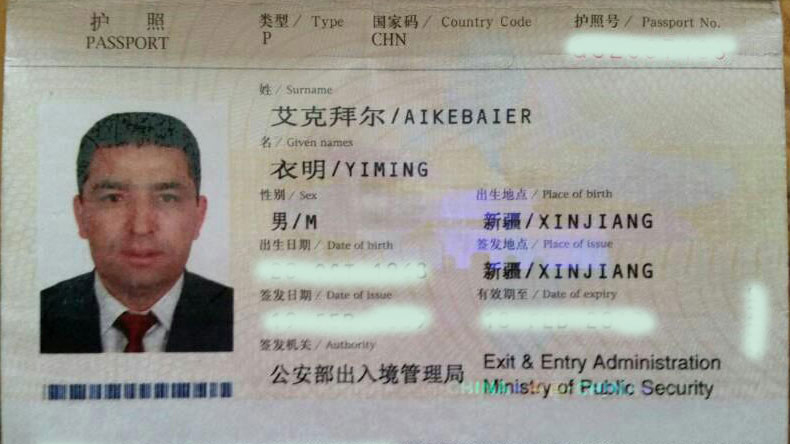 The Uyghur head of a successful real estate firm in northwest China’s Xinjiang Uyghur Autonomous Region (XUAR) and two of his brothers have been confirmed jailed on charges including “extremism,” along with at least 20 of his employees, according to official sources.

Ekber Imin, the 51-year-old head of the Guzel Makan (Beautiful Land) Real Estate firm, as well as several other companies, in the seat of the XUAR’s Hotan (in Chinese, Hetian) prefecture went missing in mid-2018, a Uyghur source living in exile in Turkey told RFA’s Uyghur Service, speaking on condition of anonymity out of fear of reprisal.

The source said that Imin, who was also known as Ekber Dalu, first became wealthy working in the jade trade and had been “targeted by authorities” after he amassed more than 1 million yuan (U.S. $146,000).

While investigating the whereabouts of Imin, RFA learned from publicly available records that Guzel Makan, which also had dealings with “foreign entities,” was established in 2007 and had total combined assets of 13.3 million yuan (U.S. $1.9 million).

RFA recently called the Hotan City Public Security Bureau and spoke with a staff member who said they were “not familiar with this situation,” when asked about Imin’s disappearance.

An employee with the city’s Tax Bureau told RFA that she was “unable to answer questions like this” when asked whether Guzel Makan was still operating, due to an order issued by the Public Security Bureau, and referred further inquiries to her superiors.

However, a third source, who used to work with a Hotan prefectural legal and political bureau, told RFA in an interview that Imin owned some 30 16-story apartment buildings in Hotan city which together are known as the Baht (Happiness) Apartment Complex, and cited a colleage as saying that he had been imprisoned for reasons that were not immediately clear.

“It was about two years ago that they said he’d been taken,” said the source, who also declined to provide his name, adding that, “Where he is, where he’s gone, what’s happened to him—I know nothing.”

“We heard 25 years,” the former legal worker said, referring to the length of Imin’s sentence.

When asked whether the nature of Imin’s business had led to his imprisonment, the former legal worker said he was unsure, but that he heard that the company “had foreign ties.”

“Everyone, young and old, knows about [his sentence],” he said.

RFA also spoke with a police officer in Hotan city who said he had heard from members of his social circle that Imin was detained, but was unsure when.

“They detained him when he was going through a [border] checkpoint,” he said, without specifying which one. The XUAR shares borders with Mongolia, Russia, Kazakhstan, Kyrgyzstan, Tajikistan, Afghanistan, and the region of Jammu and Kashmir, which is the subject of a territorial dispute between India, Pakistan, and China.

The police officer said he believed Imin had been sentenced “for life,” but admitted that he did not know for sure.

However, a police officer at Hotan’s Ilchi Market told RFA that not only Imin, but his brothers—Memetturdi Imin, 56, and Memetjan Imin, 48—were jailed along with at least 20 of Imin’s employees.

The police officer said that one of the crimes Imin was convicted for was “propagating extremist ideology by incorporating ethnic and religious elements into building designs.”

“I am aware that drivers and staffers of Ekber Imin and his brothers were sentenced, but I don’t know the exact number,” he said, adding that “some of them are serving sentences in a prison run by the Bingtuan”—a name used to refer to the quasi-military Xinjiang Production and Construction Corps (XPCC).

“Ekber and his brothers were sentenced for five different reasons. One was providing so-called ‘cover for a criminal.’ Memetturdi Imin provided housing to a [camp] detainee who had been released. He was arrested for that reason.”

Other sources also confirmed that Imin’s brothers and staffers had also been either sentenced or sent to camps.

“There were two people from our township who had worked at Ekber Imin’s company and I attended their court hearing,” a ruling Communist Party secretary from Hotan city’s Ilchi township told RFA, without providing a date for the proceedings.

“There were two sessions. One was related to Ekber Imin’s case. In that case, more than 30 were sentenced.”

A businessman from Hotan city who is familiar with the Imins told RFA he knew that Imin’s two brothers had each been sentenced to 20 years in prison, “but I don’t know about the names and number of their partners who were jailed.”

Another businessman from Hotan prefecture said that seven people, including Ekber Imin, his brothers, and business partners, “were sentenced in the last months of 2018.”

They are serving their sentences in a prison in Aksu (Akesu) prefecture,” he added.

Last month, sources told RFA that one of the wealthiest Uyghurs in Hotan prefecture had been confirmed jailed for life after his whereabouts were unknown for more than three years, and that dozens of his relatives and employees had also been sentenced to prison.

Eli Abdulla, the CEO of Xinjiang Yu Cheng (Jade City) Real Estate Development Ltd.—a company based in the XUAR capital Urumqi that deals in real estate, development, and rentals, as well as the sale of construction materials, chemicals, electronics, and mechanical equipment—went missing in mid-2016, and was believed to have been arrested by authorities and sentenced a year later.

His situation could not be confirmed amid an information clampdown in the XUAR, where authorities are believed to have detained some 1.8 million Uyghurs and other Muslim minorities accused of harboring “strong religious views” and “politically incorrect” ideas in a vast network of internment camps since April 2017. Camp incarcerations are largely extra-judicial decisions.

In September 2018, multiple reports from official media said that China’s central government had ordered local authorities to investigate the finances of all owners of private companies throughout the XUAR, at the same time that internment camps were being built in the region.

According to the directive, the reports said, private business owners were required to fill out declaration forms at the time that provided detailed financial information about their assets and submit them to relevant government departments, where they were subjected to strict review.