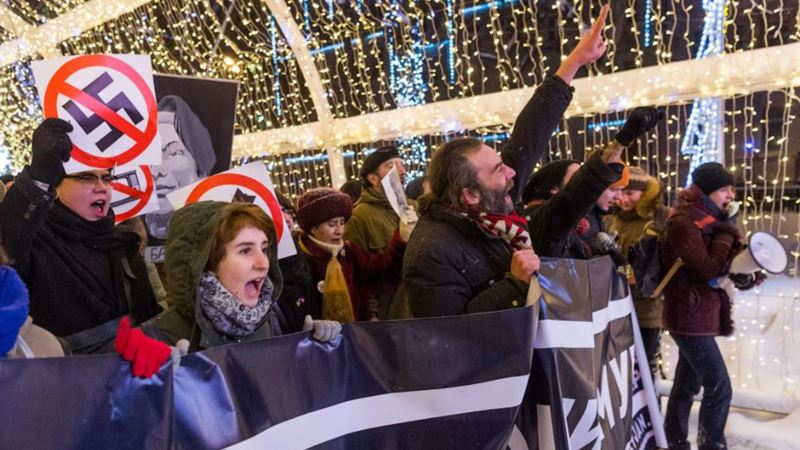 Hundreds of Russians are marching in Moscow in a sanctioned rally to mark 11 years since a human rights lawyer and a journalist were gunned down there in broad daylight in 2009.

Some of the participants held images of the 34-year-old lawyer Stanislav Markelov and 25-year-old student and Novaya Gazeta reporter Anastasia Baburova.

There was a police presence aside the column of demonstrators, which was led by people carrying copies of the Russian Constitution and a funeral wreath.

Live Stream Of The Moscow Protest

A Russian researcher for Amnesty International, Oleg Kozlovsky, shared an image via Twitter of police detaining one individual, but he suggested the man was a passerby who crossed a street illegally and sparked a quick police chase.

Markelov and Baburova had defended and chronicled the plights of victims of right-wing nationalist excesses before their deaths in one of the more brazen killings of government critics in the Putin era.

A liberal Moscow city councilor, Yuliya Galyamina, had urged participants to use the previously planned rally on January 19 to show their opposition to sweeping constitutional reforms proposed last week by Putin and regarded by some as a path to keep him in power beyond his fourth term as president.

Some of the protesters in the January 19 march held signs urging greater freedom in Russian society.

The Markelov and Baburova killings sparked accusations that the Kremlin was not doing enough to hunt down the attackers of activists and journalists.

Two young neo-Nazis, Nikita Tikhonov and Yevgenia Khasis, were convicted of the dual killings in 2011. Tikhonov was sentenced to life in prison for murder and Khasis to 18 years for helping him.

Markelov had represented investigative journalist Anna Politkovskaya, who was murdered in 2006, as well as Chechen civilians abused by Russian troops.