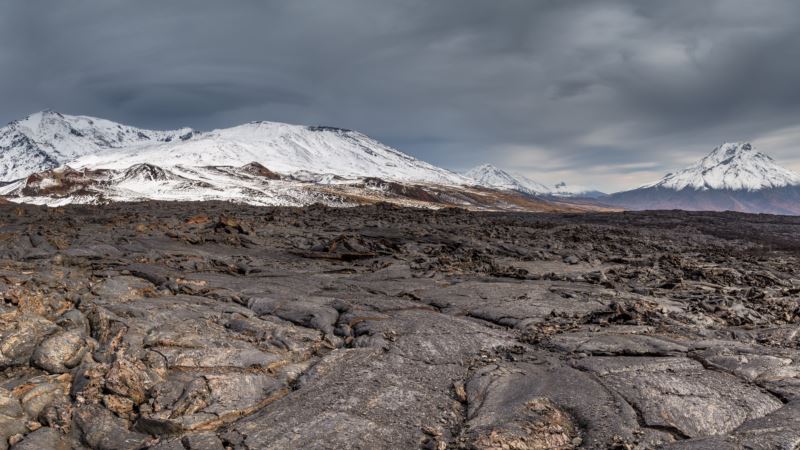 Two explosive eruptions in quick succession of volcanoes along the Pacific basin’s “ring of fire” have captured global attention lately.

They were powerful reminders of the awesomely destructive and generative processes that have been shaping the Earth’s surface for billions of years.

But for Russian scientist Ivan Koulakov, such eruptions also drive home the importance of his and other scientists’ work monitoring events in one of the world’s most active volcanic regions: the Kamchatka Peninsula on Russia’s Pacific coast.

Squeezed between the Asian landmass and the Pacific basin, Kamchatka is home to bitter cold and ice as well as over 300 volcanoes, dozens of them still active.

Koulakov is a vice director of the Institute of Petroleum Geology and Geophysics in the Siberian Branch of the Russian Academy of Sciences, as well as a geophysicist and seismic tomographer.

He and his colleagues have been working for years to deploy monitoring stations in remote and perilous areas there, analyze data that might offer clues to future eruptions, and spread the word within the global community of volcanologists and officials responsible for public safety in volcano-prone places.

Just last year, they announced the “reawakening” of a long dormant stratovolcano — the tall, steeply conical type with a crater on top — on Kamchatka known as Bolshaya Udina.

“We found an active magma chamber which may produce an eruption, and if there is an eruption it could be quite big, even catastrophic,” Koukalov told RFE/RL on January 16.

He stressed that the probability of such an eruption at Bolshaya Udina was very low.

Such reawakenings can be particularly catastrophic, he said, and likened the potential fallout from a Bolshaya Udina eruption to Mount Vesuvius’s destruction of Pompeii and other Roman cities in A.D. 79.

Bolshaya Udina is part of what’s known as the Klyuchevskoy Volcano Group (KVG) comprising 13 volcanoes, a handful of them particularly active over the past decade or two.

The volcanoes of Kamchatka were listed by UNESCO as a World Heritage Site in 1996.

A major seismological project involving Russian, French, and German researchers in 2015-16 gathered detailed readings from 83 seismographs scattered across some of the most inhospitable terrain on the planet on Kamchatka.

Then, in 2018, Koukalov and researchers from Egypt and Saudi Arabia installed four seismic-monitoring stations to closely watch Bolshaya Udina. It took Herculean efforts to even get the monitoring stations into place, with the help of a rich Russian and his helicopter, after bad weather and a shortage of funds threatened the project.

But the stations proved crucial to detecting increased seismic activity — faster longitudinal waves and slower transverse waves — that indicated a shared magma chamber with a volcano that had erupted decades earlier was feeding Udina.

Other “ring of fire” volcanoes have been busy more recently.

The two major eruptions much farther south in the past six weeks — in New Zealand and the Philippines — drove home the importance of preparedness.

On December 9, a buildup of steam and volcanic gases burst through the rocky crust of Whakaari/White Island in New Zealand’s Bay of Plenty, killing 20 people and spewing steam, ash, and cinder nearly four kilometers into the air.

A month later, on January 12, the volcano that sits inside Taal Lake on the Philippine island of Luzon erupted violently, with volcanic lightning going kilometers into the sky and sending ash as far away as the capital region.
Taal’s last major eruption was on the same date in 1977, and fracturing, bulging, and other possible precursors to an eruption have sporadically raised alert levels at Taal since then.
Kamchatka similarly sits on a sort of “conveyor belt” of subduction that plays out over millions or hundreds of millions of years, Koulakov says.

But he dismisses the notion that volcanic activity along the “ring of fire” in, say, New Zealand, hints in any immediate way at looming activity 10,000 kilometers away on Kamchatka. They are too far apart to affect each other mechanically, he says.

Precursors to eruptions can vary significantly from site to site, but also from one eruption to the next. They can include quakes and underground rumblings, fissuring and other visible deformations, rises in thermal activity through geysers or fumaroles, increased underground heat flows, and the release of sulfuric and other noxious fumes, to name a few.

At least five Russian volcanoes have erupted in the past decade or so.

Klyuchevskoy, the highest peak on the Kamchatka Peninsula, has been active for over 300 years. It has erupted at least five times since 2007.

Others include Tolbachik, Shiveluch, and Kizimen.

Another Kamchatka stratovolcano, dubbed Bezymianny (Unnamed) in a nod to its obscurity over centuries of inactivity, was considered extinct until it awakened in 1955. It blew its peak in 1956, sending a 15-kilometer ash plume into the crisp, spring air and leaving a gaping caldera behind.

Bezymianny has erupted nearly every year since.

Koukalov was part of a project to mount monitoring equipment around Bezymianny in 2018 just before another eruption.

He said he hopes to publish some of the resulting data in the next few months.

The information could provide valuable insight to help predict future eruptions in Russia and elsewhere.

Kamchatka is one of Russia’s least-populous regions, with about one inhabitant for every 16 square kilometers.

But people and volcanoes are a lot more crowded in some other hot spots, like Indonesia and the Philippines.

“If we confirm precursors of future eruptions [through monitoring in Kamchatka], that can help save lives if it is shared with our Indonesian and Filipino colleagues,” Koukalov said.

“It’s not very often that we can record in such extreme detail the signatures and precursors of eruptions, so we should share this [information].”

The region farther south — in the disputed Kurile Islands — includes more volcanoes that have spewed their tops in recent years.

Raikoke’s basalt dome exploded in June, sending ash and fumes 13 kilometers into the stratosphere above the Pacific.

Scientists classify eruptions on an open-ended scale called the Volcanic Explosivity Index (VEI). Invented by U.S. geologists in the 1980s based on more than 8,000 historic and prehistoric eruptions, the VEI assigns magnitudes from 0 (nonexplosive to gentle) through 8 (the most explosive or “mega-colossal”) and beyond.

Scientists say they believe the Tamu Massif shield volcano, discovered in 2013 under the Pacific, east of Japan, may be a single structure and one of the biggest volcanoes in our solar system at around 450 kilometers by 650 kilometers. It’s submerged, with its dome resting about 2,000 meters below the surface of the Pacific.