Quentin Tarantino’s new film, Once Upon a Time in Hollywood, is a 2019 comedy-drama set in 1969 Los Angeles and features a large ensemble cast led by Leonardo DiCaprio and Brad Pitt. The story centres around veteran actor Rick Dalton (Leonardo DiCaprio), star of the 1950s Western television series Bounty Law, and and his stunt double Cliff Booth (Brad Pitt). Dalton is worried that his career is in decline and is reticent to take advice to travel to Italy to make Spaghetti Westerns. Cliff Booth also struggles to get work in Hollywood due to rumors that he murdered his wife on a boating trip.

In Once Upon a Time in Hollywood, Tarantino re-emphasizes many of the bugbears, cliches and and myths of US elites with his checklist portrayal of misogynist violence against women, negative depictions of Chinese, Mexicans and Europeans, and the negative association of cult-following hippies with youth opposition to the Vietnam war. And all this happens during a period of much political activity and public demonstrations against the Vietnam war which is barely noticeable during the length of this film. 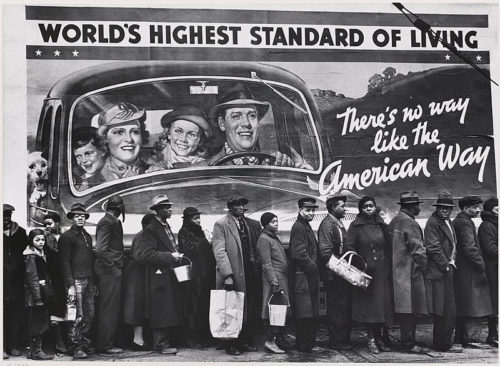 Dalton gets a big opportunity when he is cast to play the villain in the pilot of Lancer, a new American Western series broadcast from 1968 to 1970. He tries hard to toughen up for his new cowboy role yet fluffs his lines and has a minor breakdown in his trailer. The softer side of Dalton is also still visible when he shows concern for a child actress he has thrown on the floor in a ‘tough’ acting scene. Following in an old cinematic tradition Cliff appears to be Dalton’s doppelganger or alter ego as he represents the tough side of Dalton off screen. Within the film they merge on screen as they play one character when Cliff plays Dalton’s body double. The reality of Dalton is that off screen he is shown to be a sensitive and anxious person, particularly about his declining fame.

Dalton’s new role also shows that the cowboy as a symbol of the tough American individualist undergoes changes from old style hero to gritty realism, while also being caricatured in Spaghetti Westerns.

The fact that Dalton plays a famous hero cowboy role during the 1950s but becomes a tougher character in Lancer in the 1960s mirrors the changing perception and role of the USA, which changes from a simple positive force post WW2, to a more complex position during and after the Vietnam war.

Because many of the veterans and demonstrators against the Vietnam war became hippies and were fundamentally opposed to state warmongering, Cliff dislikes all hippies. Tarantino then portrays the hippies in the film as cultists who blindly follow their violent leaders.

Cliff discovers that hippies have taken over the farm where earlier cowboy movies where filmed during Dalton’s heyday, and they seem to do nothing but laze around all day watching TV. This ruination of such an important site of American cowboy symbolism only confirms Cliff’s negative attitude towards them. 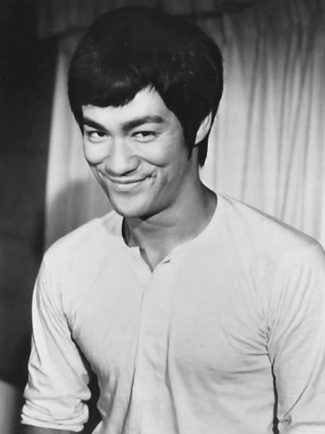 Bruce Lee, portrayed in the film by Mike Moh

The negative portrayal of Mexicans and Chinese as somehow ‘lesser’ beings is stoked up in two other scenes from the film. In Hollywood, Cliff gets thrown off a set after a scene when he provokes Bruce Lee into a fight. Lee is depicted making ridiculous cat wailing noises as he enters into a fight with Cliff, reminiscent of the worst Kung Fu movie cliches and turns the scene into a comedic parody of Bruce Lee’s own films. Cliff smashes Lee into the side of a car leaving a huge dent as if it was a superhero movie without superheros, symbolically demonstrating the ‘natural’ strength and power of the Westerner without the tutoring of Eastern martial arts. The unspoken supremacy of the white male is also depicted as Cliff shields Dalton from Mexican workers who might see him crying. The tough male hero cannot be seen to be upset before lesser mortals.

The final scenes of absolute brutality and misogyny depict Cliff slamming a can of dog meat into a female hippie’s face, then slams her face into the mantelpiece and then onto the marble floor are only equaled by the scene of Dalton roasting her alive in the swimming pool with a flame thrower from an earlier film set. Clearly Dalton has got his ‘toughness’ back after being ‘impoverished’ by his European wife and sacking his alter ego Cliff.

The effete men of Europe are represented in his depiction of Roman Polanski and the European distortions of the cowboy genre which Dalton eventually agrees to act in. Following the Italian director Sergio Leone’s success, many Spaghetti Westerns were filmed at Cinecittà studios and various locations around southern Italy and Spain between 1964 and 1978.

Like in Inglourious Basterds (where Tarantino has Americans assassinate Nazi Germany’s leadership), Tarantino gives an alternate history of the Manson Family murders when the members decide to instead kill Dalton as a representative of Hollywood which had ‘taught them to murder’ according to the ‘hippie’ logic of one of the Family members, Sadie. This symbolically turns the anti-Vietnam peace-loving hippies into the perpetrators of violence, creating more right-wing prejudice against them.

The greatest irony of Tarantino’s nostalgic view of Classical Hollywood is that Hollywood of the time followed a code of ethics agreed by the filmmakers themselves (which would have rejected Tarantino’s movies outright). During the Classical Hollywood period American toughness was tempered with respect for women, the body, foreign nationals and countries. This code of ethics, called the Motion Picture Production Code, was applied to most United States motion pictures released by major studios from 1934 to 1968. It had a quite comprehensive set of guidelines, a selected few of which are described here:

Resolved, That those things which are included in the following list shall not appear in pictures produced by the members of this Association, irrespective of the manner in which they are treated:

– The illegal traffic in drugs;
– Willful offense to any nation, race or creed;[…]

That special care be exercised in the manner in which the following subjects are treated, to the end that vulgarity and suggestiveness may be eliminated and that good taste may be emphasized:

Thus we can see that one of the reasons why the Classical period was so successful is because of its upstanding and humanistic approach to the narratives of the time. People (and their political, cultural and ethnic backgrounds) were treated more respectfully within the films and the audiences were spared the gross bone-breaking, blood spurting violence of many films made since the relaxation of the code. Directors like Tarantino have turned cinema into a modern gladiators’ ring where the audience catharsis of thumbs up or thumbs down prevails. 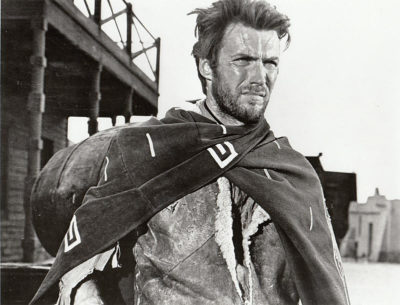 Clint Eastwood as the Man with No Name in a publicity image of A Fistful of Dollars, a film by Sergio Leone.

Tartantino’s modus operandi is to play up successful features of American culture while at the same time re-writing aspects of American history that ’embarrasses’ the political right or doesn’t fit into its over-embellished image of itself. Also in its negative depictions of other nations, women and ethnic groups (the negative portrayal of Native Americans is implicit in the cowboy genre), Once Upon a Time in Hollywood props up  the ideology of American exceptionalism.

Tarantino has produced and directed a classic of Trumpean cinema in that it reasserts the primacy of the American way of life married to conservative Republican values.