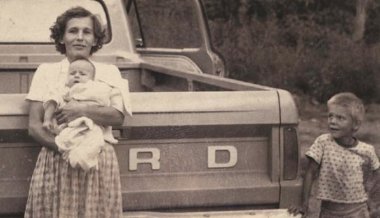 In a new memoir, Hill Women: Finding Family and a Way Forward in the Appalachian Mountains, Cassie Chambers maps the community that raised her, crafting a nuanced portrait of the women of Appalachia. Her memoir winds around biographical details about her mother, grandmother, and aunt, all of whom navigated life and often grueling work in the Appalachian mountains.

Chambers recounts a summer spent with her grandmother, a sharecropper in Owsley County, Kentucky. As a young girl, she would, like her grandmother, be awake before dawn and working the fields during the day.

“I was standing in my grandparents’ tobacco field, trying to shield my eyes from the incessant sun while holding an armload of tobacco sticks,” Chambers recalls. “My five-year-old body was tired.”

Chambers speculates that although she “was more of a hindrance than a help,” the work was nonetheless formative, imbuing her with the physical memory of her grandmother’s work.

Chambers carefully documents the personalities that shaped her, as she warns against characterizing the people of her region by their poverty alone, flattening their individuality in the process. So she sets the independence, humor, and bravery of the women in her family in contrast to their harsh living and working conditions.

Like her grandmother, Chambers’s aunt, Ruth, worked on the tobacco farm over the course of her adult life; and as for many other women and men in her family, it was work that ushered in her death. By her mid thirties, Ruth had multiple forms of skin cancer and no health care to speak of—she cut the tumors off of her own body with a knife.

The argument floating below the surface of this memoir is one about economy and culture—an economy that generates massive wealth, at great human cost, and a culture of contempt for the poor. Central to the book is Chambers’s contention that Appalachians—women in particular—are not culturally pathological or deficient but subject to restrictive economic circumstances that bind them to hard labor.

“I had always known the word hillbilly,” Chambers writes. “I understood that the word applied to people like Granny, my mother, maybe me. But . . . I hadn’t realized the way the rest of the world used that label as a brand . . . as shorthand for all of the negative things the outside world thought about us: ignorant, lazy, unsophisticated.”

Chambers’s Appalachia is populated, rather, by people who are adept at survival and who protect community members as fiercely as family.

“Granny midwives” delivered babies, usually for free, to women without insurance. Women took on the role of doctors, even surgeons, when clinics were too far or too expensive to reach. In spite of undeniably harsh circumstances, the community that Chambers describes is close-knit, protective, resourceful.

The argument floating below the surface of this memoir is one about economy and culture—an economy that generates massive wealth, at great human cost, and a culture of contempt for the poor.

Unlike most people from her hometown, many of whom did not even finish high school, Chambers went to college.

Her education took place among middle-and upper-class students, and she ended up at Yale, among the country’s political and economic elites. She earned a law degree, and returned to Kentucky to represent women and children escaping domestic violence.

In Kentucky, Chambers encountered an out-of-touch and often harmful legal system in which women, fleeing domestic abusers, faced prohibitively expensive legal fees and little opportunity for representation. In one case, the court recommended that her client “take out a home equity line of credit to pay the filing fee.” Her client, however, “couldn’t pay off any line of credit—opening one would put her home at risk.”

Hill Women, Chambers’s literary debut, may well couple as a political debut; Chambers currently serves as vice chair of the Kentucky Democratic Party. This would perhaps explain the cursory nods toward politically urgent concerns, like social services, which she addresses briefly. The book nonetheless offers a personal and compassionate voice to the national conversation around poverty, class, and economy in the Coal Belt.