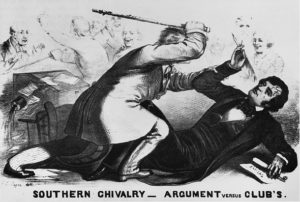 When the likelihood of a person’s death increases on the day of his or her birth, this is called the “birthday effect.” An unimaginative term, it is not derived from obscure mysticism or divine occurrences beyond one’s control, but rather the practicality that the occasion can bring increased feelings of stress and depression, and that birthday celebrations can lead to fatal accidents. But the English language has no term for someone who is born and dies in the same place, whether it be a town, house or hospital. Neither is there a succinct way to describe an entity, like a social club or political party, whose demise occurs in the same locality it came to life.

This is unfortunate because such a term may soon be applicable to the Grand Old Party should the Republican-led upper chamber of Congress fail to convict President Donald Trump of at least one article of impeachment. To be clear, the party will not suddenly disband, leaving a void to be filled by a mish-mash of sure-footed hardliners, when-they-feel-like-it moderates and opportunistic libertarians; the “R” beside an elected official’s name will remain. Since the party will have strayed still further from its roots, however, with that “R” being one of the few vestiges of its old self, to portray the likely result of this impending affair as just another symptom of the party’s internal rot would be to severely understate its significance.

The birth of the Republican Party, likewise, cannot be marked in absolute terms. Formally, it began in a rural Wisconsin schoolhouse during a town meeting in March 1854. The first statewide convention to nominate candidates for public office under the Republican name was held in Jackson, Michigan three months later. Also noteworthy is the party’s first national convention in Pittsburg in February 1856. But the GOP really grew into a political powerhouse as a result of a bloody assault on the Senate floor of an unabashed Massachusetts abolitionist by the hand of a staunchly pro-slavery representative from South Carolina. This, of course, became known as the caning of Charles Sumner.

The Kansas-Nebraska Act, having passed the Senate in March 1856, was taken up by the House in May of that year. Effectively a repeal of the Missouri Compromise of 1820, which admitted Missouri as a slave state and Maine as a free state while banning slavery north of the 36° 30` parallel, the act allowed for popular sovereignty to determine whether the two Midwestern territories would become free or slave states.

In his two-day “Crime against Kansas” speech, Sumner denounced the legislation as a “rape of a virgin territory,” arguing for the immediate admission of Kansas as a free state. The senator made pointed personal accusations against Andrew Butler, a co-author of the act and the cousin of Preston Brooks, the South Carolinian who would later approach a seated Sumner and proceed to give him “about thirty first rate stripes,” as Brooks later wrote, inflicting brain injuries severe enough to keep Sumner out of the Senate for the next three years.

Brooks’ assault, for which he was arrested, convicted, and fined, “was of critical importance in transforming the struggling Republican Party into a major political force,” historian William Gienapp observes. As the caning nestled itself into the public consciousness above and below the Mason-Dixon line, Sumner became somewhat of a martyr for abolition while the Republican Party took in many Free Soilers, northern Whigs, Know Nothings and even some fleeing Democrats, presenting itself as a beacon of sorts for those who had been on the fence regarding the existence of slavery in a rapidly expanding nation.

Prior to this, the GOP’s early years were precarious, Gienapp notes, as it was “anything but clear initially that Republicans would become a permanent fixture in the two-party system.” In 1855, the party did not exist in eight states. Launched into the next year’s presidential election by the matched themes of “Bleeding Kansas” and “Bleeding Sumner,” however, it was on the rise. Secretary of State William Marcy predicted the caning would cost Democrats 200,000 votes. When the ballots were counted, Republican nominee John C. Fremont fell two states short of winning the Electoral College. President-elect James Buchanan, a Democrat, won every state that would later secede from the Union.

“The most effective deliverance made by any man to advance the Republican Party,” Pennsylvania Rep. Alexander McClure reflected, “was made by the bludgeon of Preston S. Brooks.” The caning was by no means the sole factor in the rise of the Republican Party, of course, but it widened the cultural rift between the industrial, Republican-friendly North and the agrarian, Democratic-dominant South that had been growing more pronounced in the 1840s and 1850s.

In the North, Sumner’s speech was sold to millions, and the senator was supported in rallies from Cleveland to Providence. “Has it come to this, that we must speak with bated breath in the presence of our Southern masters?” the New York Evening Post asked. “Are we to be chastised as they chastise their slaves? Are we too, slaves, slaves for life, a target for their brutal blows, when we do not comport ourselves to please them?”

In the South, it was Brooks who was idolized. The South Carolinian was merely trying to restore the dignity of the Senate, the Richmond Enquirer editorialized, and thus his attack was “good in conception, better in execution, and best of all in consequences.” Some southerners thought Sumner exaggerated his injuries to gain sympathy. Brooks received hundreds of new canes in the mail, and southern lawmakers wore rings made from the splintered remnants of his old cane – fragments that were “begged for as sacred relicts [sic],” as Brooks wrote to his brother. When Brooks resigned to allow his constituents to either endorse or condemn his conduct through a special election, voters sent him right back. The town of Brooksville, Florida is named after him, as is Brooks County, Georgia.

These starkly dissimilar reactions, historian David Donald notes, made it clear that “something dangerous was happening to the American Union when the two sections no longer spoke the same language, but employed rival sets of clichés” to describe the caning. Southern Chivalry – Argument versus Club’s, artist John L. Magee’s depiction of a faceless Brooks, cane raised, standing over an exposed Sumner, quill in hand, remains a captivating visual in many American history textbooks to this day. Indeed, the nature of the attack – a singular, vivid, brutal and unprecedented moment in the “world’s greatest deliberative body” – seemed destined to be an omen for what became all but certain upon the election of the nation’s first Republican president four years later: the formation of the Confederacy.

The current Republican commander-in-chief acquired his position and has sought to secure it partly by assuming a disturbingly genial relationship with those who still proudly wave the battle flag whose ideals the GOP once aimed to eliminate. Along the way, he has been emboldened by a collection of adoring voices amplified by one major (and a few up-and-coming) 21st century equivalents of the Richmond Enquirer’s editorial page. Republicans frequently gripe about the supposed loss of civility in politics if they suspect that a breach in congressional decorum has occurred rather than engage with the merits of the legislation being debated. Two Oklahoma state senators have drafted a bill to name a section of Route 66 after the president. House GOP leaders handed out ‘MAGA’ hats to its members after his election win; one Missouri congressman proudly stuffs fake $45 Trump bills in his suit jacket pocket. Lastly, and most chillingly, not only do Republican voters think more highly of Trump than Abraham Lincoln, but of those who approve of Trump’s job performance, 62 percent say there is absolutely nothing he could do that would make them change their minds, all but guaranteeing that they will vote to extend his time in office.

This aspect of Donald Trump’s presidency adds an ironic subtext to the deterioration of the GOP over the years should the Senate fail to convict him. If an acquittal on both charges is indeed the outcome, then the party effectively makes a choice for which there is no atonement: it will have cemented its disregard for good-faith governance in the national political arena that became prominent more than a half-century ago through the Southern Strategy, that reared its head with the “Newtspeak” of the 1990s, and that has surged again in recent years by inviting all sorts of mischief and malevolence.

About half the country will find no fault with this decision because about half the country speaks a different language. They will continue to donate their time and money to Republican causes, and enough of their children will grow up to do the same. They will continue to consume soundbite-friendly narratives and struggle to identify misinformation that preys upon intellectual vulnerabilities. Lawmakers who call themselves Republicans will still cast their votes in favor of sound policy every once and awhile, but this will be in spite of the party to which they belong, not because of it. In a future where anything goes, the GOP will continue to fulfill its purpose: to exist, everything else be damned.

But make no mistake: If the GOP allows Trump to remain in office, the stain on the cherished fabric of our nation will be indelible, whether or not that other half wants to see it. As a result, the party will have become no different than Preston Brooks’ cane the moment he raised it high on the Senate floor: no longer an instrument of good.

William Vaillancourt is a freelance writer based out of Boston. He hold a BA in History and Political Science from Boston University and has written for The Progressive, Slate, Areo Magazine and The Washington Post, among other outlets. Read other articles by William.
Print