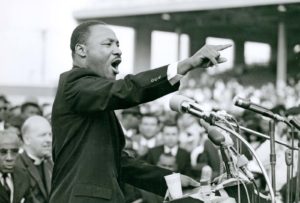 Martin Luther King Jr. Day has morphed into an annual reminder of the truth in Vladimir Lenin’s observation that great revolutionaries, while alive, are hounded by the powerful, and later, after they’ve been terminated, are lauded by their oppressors and transformed into harmless icons to placate the masses. Among the MLK-related articles to appear recently is a reposting of Edward Curtin’s 2017 review of Willam Pepper’s book The Plot to Kill King. Pepper, King’s friend and attorney for the King Family, spent 40 years researching the assassination, and Curtin’s review is a superb encapsulation of that history. King was murdered by elements of the U.S. government, a fact unsurprising for people who read history, because political assassinations have been stock power plays since antiquity. From the point of view of the psychosis that drives empires, King had to go.

There are certain facts governments and their journalistic mercenaries go to any length to suppress, because to reveal them necessarily leads to related facts that expose governmental crime. A key fact can be like a keystone species in a biological ecosystem: snuff it, and things begin to unravel. For example, that World Trade Center Building 7 was most certainly professionally prepared for demolition well before 9/11 cannot be allowed to be publicly discussed. Open acceptance of that would, as if a spring loaded canister had been opened, force the litany of related lies into the light. King’s murder is like that. Accept U.S. government-as-assassin as the truth, and one is forced to deal with associated issues: American soldiers posted to kill King if the first shooter fails; the probability that trusted colleagues were involved; Government hand-in-hand with organized crime.

The 1999 Trial in Memphis, The King Family vs Loyd Jowers et al.  was arguably the most important trial of the 20th Century, involving as it did the foremost civil rights figure of that century and the U.S. government. But “The Media” were nowhere to be seen there. For the American journalistic world it was a nonevent, and although the jury was unanimous in finding that King had been murdered by way of governmental conspiracy, the media, to this day, reinforce the fiction of a lone gunman. Many taped interviews of Pepper after the release of his most recent book have disappeared, but this one, still available on BitChute, is an hour well spent. It is shocking in details. A transcript of the trial is available at the King Center’s Website.

But there was sufficient awareness of the trial that an official comment had to come from a reliable source, such as a “newspaper of record”, and nothing fills that bill more dependably than the Washington Post, what some (e.g., me) consider to be an official mouthpiece for the CIA, such that much of it seems as if written at headquarters in Langley, VA. Following the trial, the Washington Post published an editorial on Sunday, December 12, 1999, “The King Verdict,” that could serve as a classic study of techniques of persuasion for a class on rhetoric. I can no longer find the editorial online, but the paper itself still exists, of course, and one can always get the public library to send for a xerox copy. Here, the full 418-word text of the editorial:

Normally, a jury verdict — even one that seems uncomfortably at variance with the public record — is due a considerable amount of deference. The decision last week by a jury in Memphis, however, that the assassination of Dr. Martin Luther King Jr. was the result of a vast governmental conspiracy should alter no one’s view of the assassination. It’s not that the jury misbehaved; based on the evidence presented in court, it was an open-and-shut case. Rather, the problem is that nothing approximating the real history of the assassination was ever presented to the jury.

The King family, having publicly embraced the claim of innocence of the real killer, the late James Earl Ray, was represented in the litigation by Mr. Ray’s lawyer, a conspiracy theorist named William Pepper. The supposed defendant, Loyd Jowers, was the peddler of a long since discredited tale about being a part of a conspiracy to kill Dr. King. His defense was not based on historical truth — that there was no government conspiracy — merely that his own involvement in this alleged conspiracy was limited.

In other words, the King family sued for $ 100 in damages a man who did not even contest their false thesis. The litigation in Memphis, therefore, involved no party that would go to bat for history. Meanwhile, the judge admitted a pile of hearsay evidence, even some “testimony” that had been given in a mock trial staged a few years back by HBO. Both judge and jury are reported to have nodded off during the proceedings. The inevitable result of such a sham trial is a jury verdict that — to those who have not studied the peculiar circumstances that gave rise to it — may give to a wild conspiracy theory the imprimatur of a legal finding. It should not be allowed to do so.

The deceit of history, whether it occurs in the context of Holocaust denial or in an effort to rewrite the story of Dr. King’s death, is a dangerous impulse for which those committed to reasoned debate and truth cannot sit still. That it has, in this case, been perpetrated by Dr. King’s nearest family in a court of law makes it, in addition, a mystifying act of self-deception and an abuse of the legal system. That the King family has a movie deal with filmmaker Oliver Stone gives the whole affair, to add insult to injury, a commercial feel. The case, in short, had nothing to do with law, and it had nothing to do with truth. The more quickly and completely this jury’s discredited verdict is forgotten, the better.

Even a quick scan of the editorial reveals liberal use of what communications experts call ‘loaded language’ (i.e., words or phrases employed to invoke a desired assumption or emotional reaction), as with “supposed defendant,” “the peddler of,”  “a pile of heresay,” “a sham trial,” “wild conspiracy theory,” “dangerous impulse,” “abuse of the legal system.” They appeal to emotion rather than to the intellect, always a danger sign for the critical thinker. In addition, the use of quotation marks on an otherwise neutral word, as with “testimony” in the editorial, is a common technique for mocking or trivializing or casting doubt on reliability.

The reader is set up in the first sentence to understand that the subject of the editorial is “uncomfortably at variance with the public record,” which advises the reader that acceptance of the verdict would be to counter the prevailing opinion of society. That the King Family’s attorney, William Pepper, is described as a “conspiracy theorist” reveals much about the editors, as that epithet was a creation of the CIA in the years following the Kennedy assassination as an attempt to delegitimize the groundswell of doubt surrounding the official governmental account of that killing. As was the intent, “conspiracy theorist” soon became — and has remained —  a form of insult and a means of shutting down discourse regarding many controversial issues, particularly those concerning governmental narratives.

The first sentence of the third paragraph begins with “In other words …”, indicating a summation of information from the previous paragraph. But the sentence, although presented forcefully, does not follow logically from preceding material. What the editors claim the King Family’s “thesis” to be (that James Earl Ray was innocent) is not “even” contested by Jowers, for the reason that Jowers knows that Ray is indeed innocent. The odd sentence, which a careful reader could interpret as undermining the larger editorial position, is indicative of writers struggling to make a spurious case knowing they have precious little to work with and depending on assertive style to carry them through.

The linking of the trial to an event as emotive as the Holocaust is in itself surprising, but the linking, expressed in the form of denial of the Holocaust, becomes an attempt to establish a false correspondence in the mind of the reader, as much as to say that “… the denial of the Holocaust is a deceit of history, hence any departure from the official description of King’s death is likewise a deceit of history.” It is ironic that the authors, within the same sentence, claim to associate themselves with “… those committed to reasoned debate” because elements of reason are altogether lacking in the editorial. Indeed, the use of “should,” as in “should alter no one’s view” and “should not be allowed,” rather than employment of reason is simply appeal to the editorial authority of an influential newspaper.

The 3-hour long, 1993 televised mock trial so disparagingly cited by the editors (a copy still available here) was organized for the sole reason that, due to media blackout, it finally became the only way that censored information supporting Ray’s innocence could reach the public. The editors had to have known this. Their claim that Jower’s account was “a long since discredited tale” is absolutely vacuous. Since Jowers made his first claim on an ABC news program (not to be shown again) and repeated it in the 1999 trial, at no time was it ever discredited. The editors apparently relied solely on the reputation of the Washington Post (at that time) for acceptance by readers of their claim. Had the editors been forced to provide solid, defensible evidence countering Jowers, they would have come up empty.

But they never sink lower in the editorial than when they suggest that the King family was motivated not by a search for truth but by the money to be made from a movie deal. By any decent standard, that was offensive and uncalled for. Few families have had to suffer their level of tragedy in full view of the public, and for history. They have always presented themselves as models of decorum in the most difficult of circumstances.

The editors fret that, “to those who have not studied the peculiar circumstances that gave rise to it”, the verdict of the trial may be justifiable. They are claiming that they have studied those circumstances in sufficient detail. They most assuredly have not, while William Pepper obviously has. In fact, the editors are functioning exactly as expected by protecting criminal elements of government through their attempts to cast doubt on the verdict in a civil trial that exposed those criminal elements. That they end their editorial with a terse declaration that the unanimous verdict of an American jury simply be forgotten says more about the Washington Post than many within its ranks would want to admit.

It’s difficult to overlook the facts that the CIA has long involved itself in political assassinations and, at the same time, that the newspaper so strongly linked to the CIA quickly (two days following the trial) attempted to forestall embarrassing questions about the trial with so shameful (shameless?) an editorial. Perhaps there’s something to be learned from it all.