The world is saying no to war with Iran and US out of the Middle East. Hundreds of protests were held in the United States and around the world on Saturday with a unified voice of “No War.” These protests are in solidarity with massive protests in Iraq calling for the US to get out where it is now an occupying force as the government has asked it to leave.

These protests and the uprising over the US remaining in Iraq are not being covered in the US corporate media. Millions of people participated in the memorials for General Soleimani and Abu Mahdi al-Muhandes after the US assassinated them. Now, millions have protested the refusal of the US to leave Iraq. The Pentagon knows the reality is that US troops in Iraq are at increasing risk every day the US stays in that sovereign nation.

The warnings have been sent. i24 News reports that up to five missiles struck near the US Embassy in Baghdad today. “Sunday’s attack was the second night in a row that the Green Zone was hit and the 15th time over the last two months that US installations have been targeted.”

The Pentagon will need to tell President Trump that he has two choices to protect US troops. The first choice is to abide by the law and the demands of the Iraqi government by leaving Iraq. The second choice is to escalate and bring in tens of thousands of more troops as well as anti-missile systems. Iran showed the US that even when they warned them they would be attacking a base with several hours’ notice so personnel could leave, the US military was unable to stop the Iranian missiles. Iran has also shown that it can shoot down US drones over the Strait of Hormuz.

The US needs to leave Iraq and the Middle East and stop threatening Iran or it risks spending hundreds of billions of dollars and risking the lives of US troops. All this for oil that President Trump says the US does not need. In this era when the fossil fuel economy must come to an end, it is time for the US to get out of the Middle East. 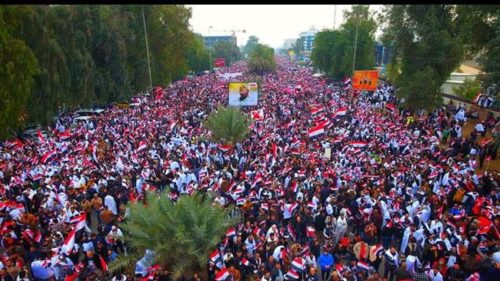 Massive Protests in Iraq Demand the US Leave

According to estimates of the Iraqi police commander Jaafar Al-Batat, over 1 million people Thursday demanded the departure of U.S. troops from Iraq with a march in Baghdad, which was convened by cleric Muqtada Al-Sadr three weeks after the murder of Iran’s General Qasem Soleimani.

The message of the protest was very clear from the signs and actions of the protesters.  Banners included “No, No to the U.S. and Yes to Iraqi sovereignty,” “The willingness of free nations is stronger than the U.S. aggression,” and “Global terrorism is made in the U.S.” Another sign sent a very clear message “To the Families of American soldiers Insist on the Withdrawal of Your Sons from Our Country, or Prepare their Coffins.” [Emphasis in Original] Protesters carried burned images of Donald Trump, others raised photos of the US president’s face crossed out with a red “X”. On the speaker’s stage, a large sign read, “Get Out America.”

Shia Cleric, Muqtada al-Sadr, who helped organize the protest said, regarding the demand of the government that the US leave Iraq, “If the U.S. meets these demands, then it is not an aggressor country” but the US will become a “hostile country” if it fails to do so. Ayatollah Ali Al-Sistani, the highest Shiite religious authority in Iraq said, “the need to respect the sovereignty of Iraq, the independence of its political decision, and its territorial unity.”

The Prime Minister and the Parliament called for US troops to leave Iraq. In a telephone call, Prime Minister Abdel Mahdi told Secretary of State Mike Pompeo to prepare to leave Iraq. Article 24 of the agreement between the US and Iraq regarding troops states that the “US recognizes the sovereign right of the government of Iraq to request the departure of the US forces from Iraq any time.”  Pompeo gave a foolish answer, turning the US into an occupying force by saying, “The US shall not withdraw from Iraq” but inconsistently said it “respects its sovereignty and decisions.” President Trump threatened Iraq saying he would impose “sanctions like they’ve never seen before” and “its Central Bank account held at the Federal Reserve Bank of New York with $35 billion could be shut down.” US Ambassador to Iraq Mathew Tueller delivered to Iraqi officials a copy of all the possible US sanctions Iraq could face.

These responses led to mass protests. The threat to US troops is very real. Sources in Prime Minister Mahdi’s office said the US is “bringing war upon itself and transforming Iraq into a battlefield” if it fails to leave. He warns, “The US will be faced with strong and legitimate popular armed resistance.”

The current conflict needs to be viewed in the context of Iraq being devastated by US actions. The Clinton administration sanctions killed 500,000 children, and the US invasion and occupation, which followed in 2003, resulted in the deaths of over one million Iraqis. More recently, the US tried to extort Iraq by demanding half its oil profits in exchange for damages the US war caused. When the Prime Minister turned to China for assistance instead, Trump threatened Iraq. The Iraqi people have had enough of US intervention. It is time for the United States to leave. 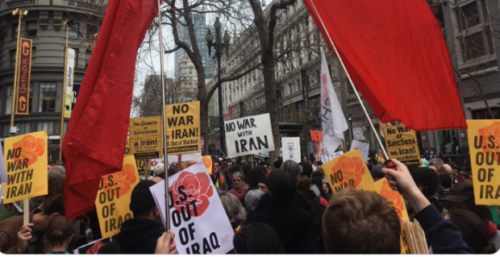 No War With Iran, January 25, from East Bay DSA Twitter

The World Joins Opposition To War With Iran, Calls For US Out of The Middle East

On January 25, a Global Day of Protest was called in solidarity with the people of Iraq and Iran. There were protests in more than 210 cities in 22 countries. The protest was organized by numerous antiwar organizations including the United National Antiwar Coalition (UNAC), the ANSWER Coalition, CODE PINK, Black Alliance for Peace, the International Action Center, Popular Resistance and many more.

UNAC pointed out that Iran has been a victim of US aggression since the 1953 coup against the democratically-elected president Mohammed Mossadegh. This was followed by the brutal rule of the US-supported Shah of Iran until the 1979 Iranian Revolution. Sanctions were immediately imposed on Iran and from 1980-1988 the US fueled the Iran-Iraq war, which killed more than one million people. In 1988, the US shot down an Iranian civilian passenger plane, killing more than 290 Iranian civilians, for which the US has still not apologized for or explained. The US has imposed escalating crippling sanctions that have devastated Iran’s economy and the lives of its citizens. Trump’s unilateral withdrawal from the nuclear agreement has led to even more sanctions. Donald Trump’s order to assassinate General Soleimani was the culmination of his campaign of “maximum pressure” against the Islamic Republic of Iran supported by both Democrats and Republicans.

Register now for the United National Antiwar Conference, “Rise Against Militarism, Racism and the Climate Crisis” in New York City from February 21 to 23.

CODEPINK sent an open letter to the people of Iran expressing that the people of the United States are “horrified by the actions of our government to provoke a war…” and apologizing for the reckless actions of President Trump. They expressed opposition to the withdrawal of the United States from the nuclear agreement, the maximum-pressure campaign and the assassination of General Soleimani writing, “Poll after poll reveals that the American people do not want a war with Iran. We want to end the Middle East wars that the U.S. has engaged in for far too long.”

This weekend’s massive protests were the second protests since the US reignited the risk of war in Iraq and war against Iran. One day after the January 3 assassination of Qassem Soleimani, the renewed antiwar movement called for protests and thousands of protesters rallied in more than 82 cities in 38 states involving tens of thousands of people.

The world is saying, “US out of the Middle East and no war on Iran”, and governments are also siding with Iran to end US hegemony. There are many countries coming to the side of Iran, perhaps most important are the Chinese-Iranian economic agreements, which have undermined US sanctions and integrated Iran into a Chinese-led Eurasian Belt and Road Initiative. The US deems this an imminent threat. In 2016, Iranian President Hassan Rohani announced during a visit from China’s President Xi Jinping that Iran and China had created a $600 billion dollar, 25-year political and trade alliance.

The military alliance developing between China, Russia, and Iran is another major threat to US domination. Iran, China, and Russia held joint naval drills in the Gulf of Oman, a “normal military exchange” that reflected the nations’ “will and capabilities to jointly maintain world peace and maritime security,” just days before the murder of Soleimani.

China and Russia have been critical to multiple countries under economic attack and military threats by the United States. This includes Iran, Iraq, Syria, Libya, North Korea, Venezuela, Nicaragua, Bolivia, and many others. A new balance of power is developing. The US peace movement needs to understand these realities and join a global movement against US imperialism.

Join us at this important conference against US imperialism. The World Peace Council and the Coalition Against U.S. Foreign Military Bases are organizing a 2-day international conference titled “Confronting Imperialism’s War Machine — The Global Struggle for Peace, Social Justice, National Sovereignty and the Environment,” on March 28-29, 2020, in Larnaca, Cyprus. Register here. 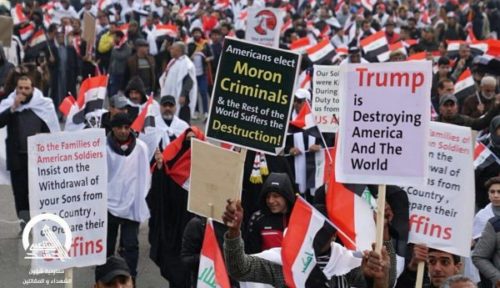 Getting Out of the US War Quagmires in the Middle East

The United States needs to reverse course after decades of mistakes, destruction, chaos and death in the Middle East. The US is not welcome in the region and will face increasing costs if it stays.

Foreign Minister Javad Zarif sent a biting tweet to Donald Trump where he urged him to act on facts, not FOX news headlines and linked to an interview with Der Spiegel highlighting a small portion:

DER SPIEGEL: Do you rule out the possibility of negotiations with the U.S. following Soleimani’s murder?

Zarif: No, I never rule out the possibility that people will change their approach and recognize the realities. For us, it doesn’t matter who is sitting in the White House. What matters is how they behave. The Trump administration can correct its past, lift the sanctions and come back to the negotiating table. We’re still at the negotiating table. They’re the ones who left. The U.S. has inflicted great harm on the Iranian people. The day will come when they will have to compensate for that. We have a lot of patience.

Conflict resolution expert Diane Perlman sees hope in the potential for ratcheting down conflicts between the US and Iran and Iraq. The proportional response by Iran for the assassination of General Soleimani, and the non-escalation by President Trump to that response are positive signs. Donald Trump has said the Middle East wars have cost trillions of dollars for no useful purpose. Iran does not want war. Iraq does not want its nation used as a battlefield. The US public and peace movement want our troops out. The nations of the world do not want another protracted Middle East war. She points out that de-escalation could “address different fundamental needs for each party.” The US leaving Iraq is a “potentially elegant solution” especially when the “unthinkable alternative” is escalation and more war.

We must continue to demand that the US follow the rule of law, respect the sovereignty of other nations, end the illegal coercive economic measures and get our bases and troops out of other countries. We urge you to participate in the upcoming events such as the day of action against sanctions and the conferences in New York and Cyprus.