Ever since The Intercept (11/20/18) found several planning documents by the Partnership for America’s Healthcare Future (PAHCF), a benign-sounding corporate alliance formed to prevent any kind of reform and prop up the dysfunctional US healthcare system’s profits, corporate media have been reporting on the PAHCF’s efforts to defend the US’s for-profit healthcare system (The Hill, 6/28/19).

Healthcare industry’s efforts to block all meaningful change in our medical system would not be nearly so successful were corporate media not working in tandem to spread these same lobbyist talking points.

The lobbying group declares that its aim is to “change the conversation around Medicare for All” in order to “minimize the potential for this option in healthcare from becoming part of a national political party’s platform in 2020.” According to media reports, one healthcare executive reassured employees in a company meeting that the healthcare industry has “done a lot more than you would think” to sabotage any move in the direction of universal healthcare (Washington Post, 4/12/19). The PAHCF’s massive coalition of lobbyists representing virtually every part of the for-profit healthcare industry are united not only in opposition to a single-payer system like Medicare for All, but also to “every single Democratic proposal that would significantly expand the government’s role in healthcare.”

But the healthcare industry’s efforts to block all meaningful change in our medical system would not be nearly so successful were corporate media not working in tandem to spread these same lobbyist talking points. 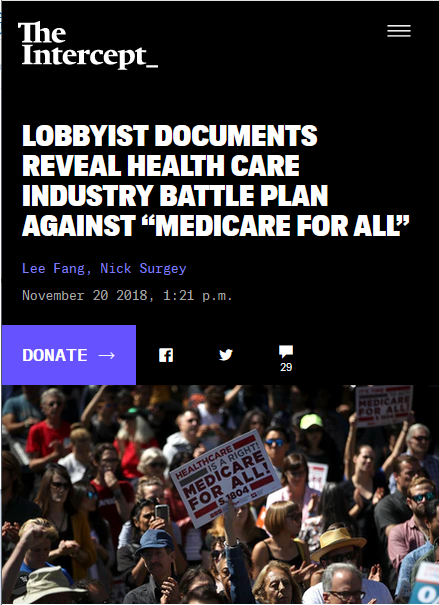 According to the Center for Responsive Politics, the healthcare industry has spent over $2 billion on lobbying across the past four years, more than any other industry. PAHCF has been recorded to have bought around half of all political advertising in the early-voting state of Iowa in the summer of 2019, and their million-dollar attack ads were broadcast throughout the 2020 Democratic presidential debates. PAHCF is also engaged in an astroturf campaign that doesn’t disclose that several “voices throughout the nation” parroting the insurance lobby’s talking points—presented as ordinary Americans who fear universal healthcare—have ties to lobbying firms and health insurance corporations (Splinter, 3/19/19).

What are some of these talking points? According to the New York Times’ “Healthcare and Insurance Industries Mobilize to Kill ‘Medicare for All’” (2/23/19):

The lobbyists’ message is simple: The Affordable Care Act is working reasonably well and should be improved, not repealed by Republicans or replaced by Democrats with a big new public program. More than 155 million Americans have employer-sponsored health coverage. They like it, by and large, and should be allowed to keep it….

In a daily fusillade of digital advertising, videos and Twitter posts, the coalition, the Partnership for America’s Health Care Future, says that Medicare for All will require tax increases and give politicians and bureaucrats control of medical decisions now made by doctors and patients—arguments that echo those made to stop Medicare in the 1960s, Mrs. Clinton’s health plan in 1993 and the Affordable Care Act a decade ago.

Politico’s “The Army Built to Fight Medicare for All” (11/25/19) reported that the PAHCF’s “core conviction” is that “things aren’t actually that bad,” and explained why the industry group opposes any reform (even a deeply flawed public option) to expand the public sector’s healthcare coverage:

The industry still views single payer as the doomsday scenario. But by early 2019, it’d become far from the only worrying possibility, as prominent Democrats floated all manner of routes to universal healthcare. The problem: Each achieved their goal in roughly the same way—by having the federal government annex broad swaths of the private insurance market, either by creating a competing public option or expanding the existing Medicaid or Medicare programs deeper into the private sector’s territory.

Those plans might sound more palatable to the ordinary American, but to Partnership members it still meant fewer customers, lower pay rates and a new, unnecessary regime of profit-pressuring regulations. So as each 2020 presidential contender rolls out their own signature take on an overhaul, the response from the Partnership has been loud and unflinching: No.

“The politicians may call it Medicare for All, Medicare buy-in, or the public option,” reads an ad run by the Partnership during September’s Democratic presidential debate. “But they mean the same thing.”

If this all sounds familiar, that’s because these are the same talking points echoed by corporatist Democrats, and amplified by corporate media, that FAIR has critiqued throughout this election cycle (FAIR.org, 4/29/19, 6/25/19, 7/1/19, 10/2/19).

When corporate media aren’t busy featuring negative op-eds from politicians that PAHCF’s undisclosed lobbyists helped write, one can find regular columns featured in The Hill (1/31/19) and the New York Times (10/19/18) telling us not to get “too excited about Medicare for All” because it’s a “terrible” idea championed by “young Bolsheviks” that would make Trump look like a “sure winner in 2020.” There are no shortage of op-eds in the Washington Post (2/19/19, 2/22/19, 10/25/19, 1/7/20) echoing the “government-run healthcare” canard, telling us that we don’t need to go “full Canada” because Medicare for All is a “pipe dream” and a bunch of “pointless quibbling.” 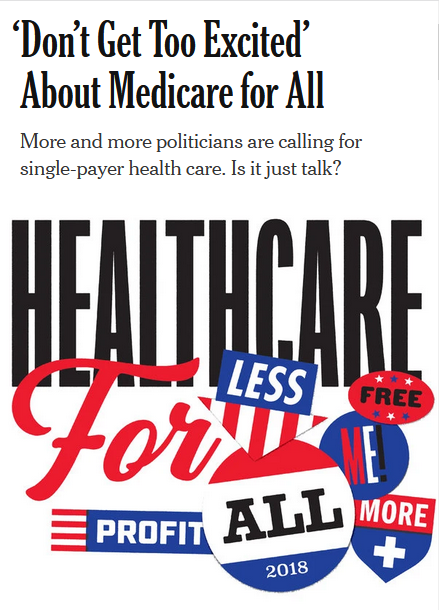 Politico (9/23/19) made the disingenuous and incoherent argument that pitting a public option that leaves the wasteful and parasitic health insurance industry intact against Medicare for All is a “false choice,” and a “fear tactic sowed by defenders of corporate greed meant to divide us,” while simultaneously arguing that “preserving the option for employers and unions to continue to innovate in healthcare is critically important.”

Meanwhile, the New York Times dutifully followed PAHCF guidelines by attacking both a public option and Medicare for All. The Times’ “How a Medicare Buy-In or Public Option Could Threaten Obamacare” (7/29/19) argued that a public option “may well threaten the ACA in unexpected ways.” After noting how the “ACA is a solidly profitable business for insurers,” in spite of “stock drops” over “investor concerns over Medicare for All proposals,” the Times raised fears that a:

buy-in shift in insurance coverage could profoundly unsettle the nation’s private health sector, which makes up almost a fifth of the United States economy. Depending on who is allowed to sign up for the plan, it could also rock the employer-based system that now covers some 160 million Americans.

The Times’ “Medicare for All Would Abolish Private Insurance. ‘There’s No Precedent in American History’” (3/23/19) argued for the status quo, which leaves tens of thousands of people dying every year from a lack of insurance, with an estimated 530,000 families suffering medical bankruptcies every year, with relentless and unsustainable drives to raise premiums and deductibles to maximize profits and lower for-profit insurers’ “medical loss ratio” (the figure given to investors to inform them of how much money they lost to medical claims). Before concluding with a statement from Mark Bertolini—a former CEO of insurance company Aetna—informing us that “it’s not that simple” to “shut down all the private insurance companies,” the Times warned readers that:

Doing away with an entire industry would also be profoundly disruptive. The private health insurance business employs at least a half a million people, covers about 250 million Americans, and generates roughly a trillion dollars in revenues. Its companies’ stocks are a staple of the mutual funds that make up millions of Americans’ retirement savings.

Such a change would shake the entire healthcare system, which makes up a fifth of the United States economy, as hospitals, doctors, nursing homes and pharmaceutical companies would have to adapt to a new set of rules. Most Americans would have a new insurer — the federal government — and many would find the health insurance stocks in their retirement portfolios much less valuable.

Corporate media have also boosted centrist presidential candidates taking the most money from the healthcare industry (FAIR.org, 4/28/19, 7/3/19, 9/9/19, 12/12/19). Joe Biden is a reliable mouthpiece for the PAHCF’s opposition to Medicare for All by constantly lying about the proposal, even shamelessly using dead family members to attack it. A company linked to Biden’s campaign has also been caught testing messages “designed to undercut support among Democrats for Medicare for All,” finding that Democrats are “most swayed by” arguments that the “program would impose a heavy cost on taxpayers and threaten Medicare for senior citizens.” Pete Buttigieg famously flip-flopped on the issue after accepting the legal bribes often euphemized as “campaign contributions.” 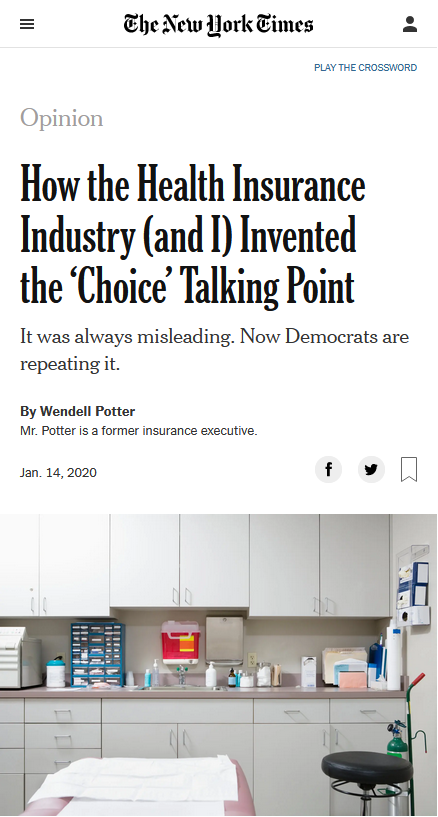 That corporate media is pushing PAHCF’s pernicious talking points should not be surprising; former insurance executive turned whistleblower Wendell Potter confessed in his book Deadly Spin how PR executives like himself “cultivate contacts and relationships among journalists and other media gatekeepers” to manipulate coverage and public opinion to quash reforms. In a recent New York Times op-ed, Potter pointed out that one of the major themes of healthcare coverage is essentially an insurance industry hoax:

We were told by our opinion research firms and messaging consultants that when we promoted the purported benefits of the status quo that we should talk about the concept of “choice”: It polled well in focus groups of average Americans….

But those of us who held senior positions for the big insurers knew that one of the huge vulnerabilities of the system is its lack of choice. In the current system, Americans cannot, in fact, pick their own doctors, specialists or hospitals — at least, not without incurring huge “out of network” bills.

When a staunchly consistent Medicare for All advocate like Bernie Sanders has an increasingly serious shot at winning the Democratic Party’s nomination for the 2020 election cycle, it’s especially important to push back against the overwhelming propaganda onslaught from the gargantuan healthcare industry.