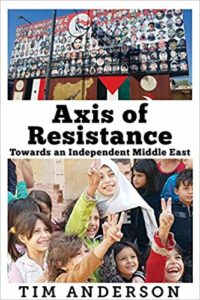 Tim Anderson’s Axis of Resistance: Towards an Independent Middle East takes on the leftist position of ‘a plague on all your houses’. Yassin Al-Haj Saleh, ‘the intellectual voice of the Syrian revolution’ (for westerners), presents a bleak portrait of “three monsters … treading on Syria’s corpse”: (1) the Assad regime and its allies, (2) DAESH/ISIS and the other jihadists, and (3) the West (the USA, UK, France, etc). This is the general view from outside the Syrian cauldron, but leads nowhere.

I remember the view from Cairo, where I was writing for Al-Ahram Weekly as the ‘Arab Spring’ exploded. The first few months of 2011 in Egypt saw the collapse of the pro-western dictator Hosni Mubarak, and a wave of uprisings in the region, including Syria. Would protestors succeed there too, I asked myself. But the Syrian army was not behind the protests, as was the case in Egypt, where the army was angered by Mubarak’s embarrassing attempt to promote his younger son as heir. There was no such split in Syria, despite resentment of the Alawite dominance and persecution of the Muslim Brotherhood.

I realized that any uprising was doomed, more so, since Assad was not Mubarak, and both domestically and internationally represented the broad interests of Syrians, seen by the West as the last of the Baath anti-imperialist socialists. Yes, quick to jail dissidents, but what else is new? If I were a Syrian eager for change, I would have bitten the bullet and done my best to calm the waters (and hopefully not have left a trail leading me to prison). There is no rose garden for anyone these days.

Erdogan’s stab in Assad’s back was the final straw, revealing the metastasizing Syrian debacle as a western-Turkish effort, Turkey waiting for the chance to reassert its Ottoman muscles, with NATO hovering in the background. Anderson documents the gory details of what followed, where Putin shines as the knight in shining armour, also stabbed by Erdogan (shooting down Russian plane in 2015), but resolute enough to move forward, the goal to defeat ISIS and stabilize Syria, not letting it fall to the imperialists. Some key observations Anderson makes about Turkey:

All along, refugees have been returning, though what should be encouraged by the West (where refugees of all kinds are desperately fleeing), i.e., working with Assad to bring this about, was rejected. Instead, Assad was pilloried ceaselessly in western media, and the Syrian government suffered (still suffers!) under the US-Israel strategy of siege/ subversion of ‘enemies’. The West’s lust for regime change meant tragedy for countless millions of Syrians.

US-Israeli strategy in the Middle East has always been to subjugate independent peoples and dominate the entire region. By this logic, resistance forces must be kept fragmented. Regardless of any specific pretext for each conflict, the wave of bloody aggression has a single aim: to secure privileged access to the region’s resources and so dictate terms of access to Russia, China and any other outside power.

US-Israel is so confident of itself and its privilege to control the world, that anything that interferes with this is considered terrorism/evil/whatever. This is why Iran is so crucial in preventing US-Israel from succeeding. We are treated to ‘news’ couched in US-Israel doublespeak: a ‘shia crescent’ is haunting Europe, to paraphrase the opening words of the Communist Manifesto.

We are fed conspiracy stories about a subversive corridor for Iran to the Mediterranean, to threaten US-Israel. What Anderson calls ‘the axis of resistance’, which Lebanese analyst Marwa Osman argues ‘was pushed into existence by continuous western hegemony and has less to do with its religious identity and more to do with its principled independence, great capacity and independent political will.’

It is amusing to note those who lauded Trump for assassinating Soleimani, the key figure in the defeat of ISIS in Iraq, revered at home, visiting neighbouring Iraq on official business, putting the US on an equally notorious par with Israel, which assassinates Palestinians, officials and non-officials, men, women, and children alike, on an almost daily basis. A House of Representatives War Powers non-binding resolution that was all theater and did nothing to limit the president’s unilateral ability to go to war with the Islamic Republic. It was non-binding, because the House knows ahead of time that Trump would veto anything binding if the Senate had the nerve to pass it.

Various US politicians (Lindsey Graham first off the mark) lauded Trump, agreeing with him that Soleimani is a terrorist responsible for thousands of deaths of US citizens. No US politician questioned that narrative, just criticizing Trump for acting without notifying Congress. Italy’s Salvini and the US lobbyists for both sides in Libya, and ISIS, which issued a personal thanks to Trump. Boris Johnson (‘we will not lament his death’), a nod and wink at Trump.

No room for ‘deaths of thousands of unwanted occupiers who, we might remind BoJo, are responsible for hundreds of thousands of deaths of ‘innocent civilians’ and resistance fighters. The deaths of occupier soldiers are all accepted by international law, since they are aimed at liberating their countries from unwanted, illegal occupiers. (Same goes in Palestine.) Any US soldier in both Iraq and Syria is fair game for resistance fighters, as they are there as occupiers, where both governments demand their withdrawal.

Anderson looks at the various wars which US-Israel wage, and at the axis of resistance (Shia or otherwise) coalescing to confront the aggressors. ‘The resistance in particular countries can and should be studied, but their integration into the regional resistance remains critical to their success.’ These forces include the Syrian regime, Hamas, Hezbollah, Yemenis, Iraq and Iran. At some point, Afghanistan should become part of this alliance.

This new ‘arc’ will feature China in the background, after Iraqi Prime Minister Mahdi’s visit to China in November, where he signed a huge deal putting China in control of reconstruction. Trump et al were furious and threatened to destabilize Iraq. What happened? A few weeks later, riots broke out against the government and Iran. Trump insists on Iraq paying half of oil revenues to the US for assistance in reconstruction, i.e., in rebuilding what the US occupiers destroyed, or Iraq would face worse sanctions than Iran.

When the Iraqi parliament called for the immediate departure of US troops last week, Alsumaria TV reported the warning by US State Department First Deputy Assistant Secretary of State Hood that, “If we withdraw from Iraq, the investors will exit and ISIS will return.” What he openly threatens is that the US will cook up more action from ISIS, (remember, ISIS openly thanked Trump for assassinating Soleimani, the real brains behind the defeat of ISIS). When will Americans wake up to the reality that the US and Israel support ISIS, use ISIS, to further their own intrigues? Time to call the terrorists by their real name — US-Israel-ISIS?

China is finally coming out of its hermetic shell. It is the world’s biggest ‘investor’, and will be happy to fill the ‘vacuum’ in Iraq. But it will be the axis of resistance, with Russia in the key position, that will fight US-Israel-ISIS. Cuba’s national hero Jose Marti said of the independent nations of Latin America in the late 19th century, facing both the Spanish and the rising North American empire: The trees must form ranks to keep the giant with seven-league boots from passing!

Slings and arrows at resistance

Anderson has faced the same barrage of attacks from the mainstream media that all critics of imperialism through the ages have had to bear. My own forging process as anti-imperialist was in Soviet days, when the same distorted, often lying propaganda was aimed there. It’s as if there is a propaganda machine perfected over the generations, which is merely tweaked to fit the latest enemy. Of course, neither the Soviet Union nor Syria, Libya, Iran, are/were paradises. But their essential worth as buttresses against lies and wars is dismissed, the narrative crafted to fit the imperialist agenda of divide-and-conquer.

This century’s military, economic and propaganda wars against Palestine, Afghanistan, Iraq, Iran, Lebanon, Libya and Syria have successfully conscripted western liberals, leftists, NGOs and of course the corporate and state media. Very few question the war narratives; and those who do are abused.

The entire world is in thrall to US-Israel now. Iran, the only country standing up to this imperialist monster is abandoned by even anti-imperialist Russia and fairweather friend China. We are all imperialists’ is the new slogan etched in our minds as our unwanted credo in a world on the brink.

As Anderson concludes, ‘support and respect is due to all independent peoples. It is not about whether we agree with everything they do. It is about respect for other peoples. Commitment to support their self-determination is our human responsibility.’