Juan Guaidó proclaimed himself the president of Venezuela a year ago but despite multiple coup attempts, he never took power and his support there rapidly disappeared. Now, with his foreign tour concluding, Guaidó’s support is shrinking around the world as well. Rather than looking presidential, he appears clownish. Rather than developing new plans to try to topple President Maduro, he is left without any concrete promises from European governments, which have been more resistant than the United States toward imposing more sanctions despite Guaidó‘s pleading for support.

Despite his failures, according to US law, as long as President Trump recognizes him as the President of Venezuela then the courts will go along with the charade. Such is the situation we will face when we go to trial on February 11 for the charge of “interfering with certain protective functions” by the Trump administration. In the courtroom, Guaido is the president even though outside the courtroom he has never been president. Learn more about the trial and what you can do to support us and our co-defendants at DefendEmbassyProtectors.org. 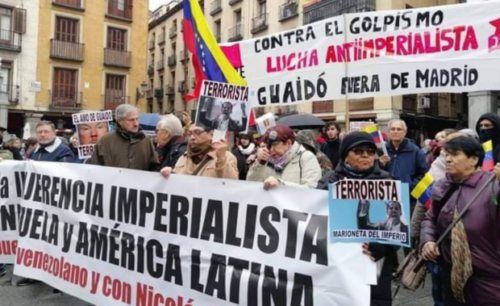 Protesters greet Guaido in Spain outside of Foreign Ministry, January 22, 2020.

Guaidó Will Return Even Weaker Than When He Left

In his grand finale in the United States this weekend, Guaidó made clear his desire to meet President Trump. There were three opportunities — at Davos, Trump left before Guaidó arrived; in Miami, Trump skipped the Guaidó rally to play golf; and at Mar-a-Lago Guaido was not invited to the super bowl party. Guaidó was a short drive from Mar-a-Lago but President Trump never called him. The Washington Post reported, “the lack of an encounter — even a photo opportunity — could be taken as a sign of Trump’s lack of interest in Venezuela at a time when Guaidó is seeking to keep his crusade against Maduro alive…” The Post also noted that Trump did not show up for Guaidó’s event in Miami, although several politicians including Debbie Wasserman Schultz and Marco Rubio were there.

Geoff Ramsey, director of the Venezuela program at the right-wing anti-Maduro, Washington Organization on Latin America told the Post, “Going to the United States without meeting with Trump is a risk for Guaidó,” adding that not meeting with Trump shows “that for Trump, the issue of Venezuela is not a priority.” Michael Shifter, president of the Washington-based Inter-American Dialogue, which also supports the coup, told the Associated Press, “If Trump does not meet with Guaidó, that would raise serious questions about the administration’s continuing commitment to Venezuela’s interim president.”

Guaidó was in steep decline at home when he left Venezuela, losing the presidency of the National Assembly as even much of the opposition to Maduro now oppose him. His support has primarily emanated from the United States and President Trump. The US has been keeping right-wing governments in Latin America and its western allies from openly giving up on the failed coup. But now with Guaidó losing the visible support of President Trump, it will become more difficult to keep these countries’ support. The feeble shrinking puppet may be on his final tour as a fraudulent “president.”

One year after his self-declared presidency and five failed coup attempts, Guaidó has not been president of Venezuela for one day, or even one minute. Trump’s open coup failed repeatedly because the people of Venezuela support President Maduro and the military are staying loyal to the constitutional government. On January 6, the NY Times summarized the situation with a subheadline: “America threw its might behind Juan Guaidó when he claimed the presidency, a direct challenge to President Nicolás Maduro. A year later, the Trump administration has little to show for its efforts.”

Guaidó’s foreign tour was a last-ditch effort to revive his dwindling coup. He had a brief photo-op with Prime Minister Boris Johnson a few hours before the Parliament voted to leave the EU. Guaido then turned to the fragmenting EU for more photo-ops. He called for more illegal sanctions against Venezuela, which will surely anger the Venezuelan people and further his spiraling political decline. 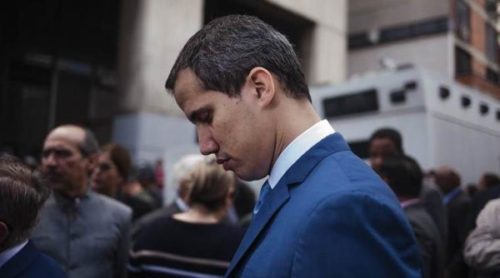 The Anniversary of an Imaginary Government

Latin America is revolting against neoliberalism and paradoxically Guaidó went to the heart of it at the Davos gathering of global oligarchs. Even the pro-coup New York Times gave Guaidó bad reviews. They wrote: “This time last year, Juan Guaidó would have been the toast of Davos. . . But as Mr. Guaidó made the rounds at this year’s gathering of political and business figures — having come to Europe in defiance of a travel ban at home — he seemed like a man whose moment had passed.” The Times reported that “Nicolás Maduro, [is] still firmly entrenched in power.”

Venezuelanalysis reports that at Davos “the opposition leader was set to meet with US President Donald Trump on the sidelines of the summit. However, the face-to-face encounter did not materialize…” Mision Verdad summarized it, writing “Guaidó will not bathe in glory but in the wrath of global society and the intrigues that his crash cart tour has left for European leaders.”  Guaidó’s failure at Davos is a “good way to portray the first anniversary of his imaginary government.”

The focus of his trip was on his repeated failures, as the Times reported, “the embattled Venezuelan spent most of his time answering questions about why he had not succeeded in toppling Mr. Maduro.” Guaidó, the Times added, has no new ideas, writing,  “Guaidó struggled to offer fresh ideas for how governments could tighten the pressure on Mr. Maduro. Venezuela is already under heavy sanctions, which have so far failed to dislodge him.”

While the New York Times remains a vehicle of misinformation about Venezuela and President Maduro, they did get this summary correct: “But a year of high-stakes maneuvers by Mr. Guaidó — like trying to persuade the military to turn against the president and trying to bring in much-needed humanitarian aid across the border — failed to bring down Mr. Maduro, who retains firm control of the military and of the country’s resources.”

After Davos, Guaidó went to Spain where Spain’s new left-wing coalition refused to grant the politician an audience with Prime Minister Pedro Sánchez. Instead, Foreign Minister Arancha González Laya held a brief meeting with him. To add to that insult, Transport Minister José Luis Ábalos met at Madrid’s airport with Venezuela’s vice president, Delcy Rodríguez, who is banned from stepping into EU territory. In Canada, he had a photo-op with Justin Trudeau but Guaidó showed his amateurish incompetence when he claimed that Cuba should be part of the solution to the political conflict in Venezuela. Officials in both Canada and the United States swiftly rejected this idea.

He concluded his journey in  Miami, waiting for President Trump’s phone call — a call that never came. 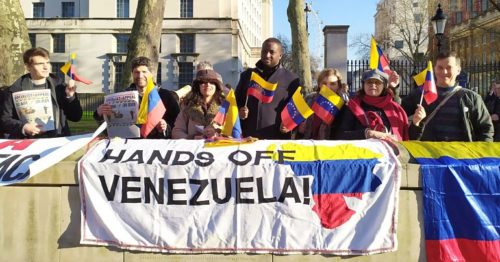 For those of us who follow Venezuela closely, the failure of  Guaidó is not a surprise. His self-appointment violated Venezuelan law and it was evident that Maduro legitimately won re-election with widespread public support. The people of Venezuela have a deep understanding of US imperialism and will not give up the independence and sovereignty they have fought so hard for since the election of Hugo Chavez in 1998.

On the anniversary of his self-declaration as president, Supuesto Negado mockingly reported: “Guaidó did not come to his anniversary party… It was expected that January 23 would be considered again the day of freedom, the end of the dictatorship, but no one really celebrated anything. Not a candle, not a piñata. No one remembered it. No one called to congratulate him. No one came to the party.”

Instead, members of the National Assembly danced to celebrate Guaido’s defeat as president of the Assembly and President Maduro spoke at a massive rally in Caracas at the Miraflores Palace saying, “A comedy began on January 23, 2019. A year ago they tried to impose a coup d’etat on our people, and the gringos went out into the world to say this is going to be quick and easy, and a year later we have taught North American and European imperialism a lesson!” He also announced a dialogue with the opposition so that the National Electoral Council can prepare elections for the National Assembly and confidently invited the UN to appoint a delegation of international observers for the parliamentary elections along with Mexico, Argentina, Panama, and the European Union. He urged Trump to give up on “the boob” and said, “if the president of the United States, Donald Trump gets tired of the lies of Mike Pompeo and Elliott Abrams, the Venezuelan government is willing to engage in dialogue.”

Even though Guaidó’s visit to the UK was kept under wraps until Monday 20, he was met by protesters on the 21st at the first stop on his failed European tour. The Canary reports “a protest was organized in London against Guaidó’s visit. Demonstrators called for Guaidó to be “put on trial,” not legitimized by UK government. Jorge Martin, who founded Hands Off Venezuela following the failed 2002 coup said: “This person should be arrested and put on trial in Venezuela for having attempted to overthrow the democratically elected government.”

Wherever he went there were protests. In Brussels, a woman was arrested for hitting Guaidó with cake. In Spain, activists from different social organizations gathered in front of the headquarters of the Ministry of Foreign Affairs in Madrid to repudiate the visit of Guaidó with posters that described Guaidó as “clown manufactured by the empire.”  AP reported that protesters referred “to the politician as ‘clown’ and ‘puppet’ of the US.  ‘No to imperialist interference in Venezuela and Latin America,’ read a big banner that also showed support to ‘Venezuela’s people and Nicolás Maduro.’”

In Florida, opponents of the coup published a statement saying, “On the occasion of the visit of US puppet Juan Guaidó to Miami this weekend, the US Hands Off Venezuela South Florida Coalition denounces Washington’s policy of sanctions, currency freezes, and other forms of economic warfare now burdening the people of Venezuela. . . Over the past year, Washington has used Juan Guaidó as a tool in its attempt to replace the elected government of Venezuela.” Even in the stronghold of support for the coup in the US Guaidó only spoke to a crowd of 3,500 announcing his plan to return to Venezuela. 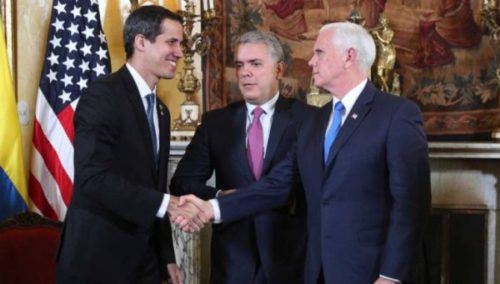 The US Spends Hundreds of Millions on the Farce Coup

The United States, seeing the incredible riches of Venezuela – oil, gold, diamonds, gas, precious minerals and fresh water – has spent hundreds of millions to put in place their puppet. The corruption of Guaidó and the corruption tied to US dollars was one reason he lost control of the National Assembly, which is now investigating US funding.

While Guaidó has been shrinking, Maduro has been growing stronger. Maduro has signed more than 500 bilateral agreements with China that put in place a long-term economic relationship. Russia has provided military, intelligence, and economic support. He has signed new agreements with Iran for medicine, food, energy, and healthcare. Venezuela has met its goal and delivered more than three million social housing units for more than 10 million people. This year economists are predicting the Venezuelan economy will expand and people are seeing the country as a paradox of stability. Some suggested that Maduro was the man of the year for successfully standing up to the Trump coup.

The never-in-power and disappearing Guaidó is especially ironic for us as we will be going to trial on February 11 for what Telesur described as “an epic act of resistance in the trial of our times.” The strange thing is the courtroom is likely to be a fictional space where Guaidó is president due to US court decisions that do not allow courts to question foreign policy decisions of the president. It is not clear whether we will get a fair trial, but we are continuing our fight to end US imperialism and for justice for the people of Venezuela. It is time for the US economic war and tragic regime change campaign to end.