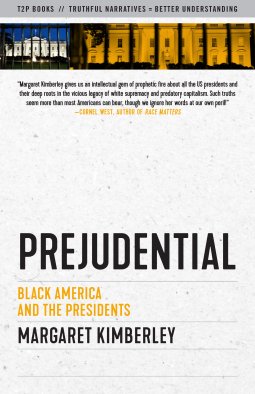 Prejudential: Black America and the Presidents, a new book released Feb. 4, is the first title published by Steerforth Press’s T2P (Truth to Power) Books. It is written by Margaret Kimberley, a New York-based writer and activist for peace and justice issues. She is also an editor and columnist for the website Black Agenda Report.

The book is organized into 45 chapters, critiquing each President from George Washington through and including Donald Trump.

No less an authority than Cornel West has called the Prejudential “an intellectual gem of prophetic fire about all the U.S. Presidents and their deep roots in the vicious legacy of white supremacy and predatory capitalism. Such truths seem more than most Americans can bear, though we ignore her words at our own peril!”

As the title implies, the book examines all forty-five U.S. Presidents and their attitudes towards black folk, and separates the myths from the truths.

“This book is an effort to shed light on the truth,” writes Kimberley in the preface. “To the extent that our leaders embody aspects of who we are as a people, studying how each President has participated in our nation’s complicated and often shameful treatment of black people is as good a place as any to start.”

She quotes a comment from W.E.B. DuBois: “In 1956, I shall not go to the polls. I have not registered. I believe that democracy has so far disappeared in the United States that no ‘two evils’ exist. There is but one evil party with two names, and it will be elected despite all I can do or say.”

The book is organized into 45 chapters, critiquing each President from George Washington through and including Donald Trump. The book separates the Presidents into historic periods. For instance, Chapters 1 to 5, the “Founding Fathers,” cover Presidents Washington, Adams, Jefferson, Madison, and Monroe. Other periods include “Pre-Civil War,” “Reconstruction,” “Early Twentieth Century,” “Late Twentieth Century, and “Modern Day,” which deals with Presidents H.W. Bush through Trump.

Each chapter has a timeline of important events to blacks starting in 1790, with Maryland, Massachusetts, New York, North Carolina, Pennsylvania, and Vermont allowing free blacks to vote. The last item in the timeline is from 2017: “Donald Trump’s election revives the openly racist political campaign.”

Twelve Presidents owned slaves, including George Washington and the other founding fathers. The book notes that Washington’s wooden teeth are a myth; they came literally from the mouths of his slaves, whom he moved out of Philadelphia when it was the U.S. capital to prevent their emancipation.

There is deserved scrutiny given to all the Presidents, including the ones thought to be “good for black people,” like Franklin D. Roosevelt and John F. Kennedy.

I am by no means a presidential scholar. I was born during Eisenhower’s presidency, and the only thing I remember about him was his wife, Mamie, and her bangs. I do vividly remember where I was when, at age seven, I heard the news about Kennedy’s assassination.

In many black homes in the 1960s, including mine, there were three portraits on the walls: John F. Kennedy, Robert Kennedy, and Martin Luther King Jr. Yet Kimberley notes that Kennedy was not fully supportive of the civil rights movement, and his assassination and subsequent imaging campaign elevated him to an unwarranted status as a martyr in the black community.

The same scrutiny is applied to the openly racist Presidents, including Abraham Lincoln, commonly known as “the Great Emancipator.” The book notes Harry Truman’s membership in the KKK, and Donald Trump’s known use of the N-word.

In 1920, the Nineteenth Amendment was passed, and all blacks gained the right to vote. Yet in 1947, only 12 percent of southern blacks were registered to vote, up from 3 percent in 1940.

By 1990, the nation’s black population had risen to 40 million. In 1998, Toni Morrison declared of Bill Clinton: “white skin notwithstanding, this is our first black President.”

I highly recommend Prejudential, especially for those registered to vote. Race matters, and an examination of past Presidents will certainly inform us in future elections.

Jimmy Carter garnered 90 percent of the black vote in 1976. In 2008, 65 percent of eligible black voters turned out to vote, almost all for Barack Obama.

Obama, like the other Presidents, is scrutinized and criticized for his “daddy issues” and public criticisms of black fathers. The author notes the so-called peace-seedling candidate and his subsequent use of unmanned drones to kill “untold numbers of innocents.”

Prejudential is well-researched and written as well as a literal easy read with annotations. It hopefully will inform the 2020 U.S. presidential election and beyond.

Kimberley ends the epilogue with a quote from Martin Luther King Jr.: “Injustice anywhere is a threat to justice everywhere . . . Whatever affects one directly, affects all indirectly.”

She continues: “If Americans can ask Germans to apologize for the Holocaust or ponder why Joseph Stalin is still popular in Russia, they can be told to cast Andrew Jackson [a slave holder] from the twenty-dollar bill and from any notice of respectability.”

I highly recommend Prejudential, especially for those registered to vote. Race matters, and an examination of past Presidents will certainly inform us in future elections.

[1] Margaret Kimberley | Black Agenda Report ➤ https://blackagendareport.com/taxonomy/term/16[2] What were George Washington's teeth made of? (It's not wood) | Live Science ➤ https://www.livescience.com/61919-george-washington-teeth-not-wood.html[3] The Most Famous KKK Members In American Politics And US History ➤ https://allthatsinteresting.com/famous-kkk-members/4[4] On the First Black President | The New Yorker ➤ https://www.newyorker.com/magazine/1998/10/05/comment-6543[5] ➤ https://www.census.gov/history/pdf/2008presidential_election-32018.pdf[6] Dissecting the 2008 Electorate: Most Diverse in U.S. History | Pew Research Center ➤ https://www.pewresearch.org/hispanic/2009/04/30/dissecting-the-2008-electorate-most-diverse-in-us-history/