Ahead of the Delhi assembly elections on February 8, a 26-second video has gone viral which shows a man on wheelchair accepting a blanket. After introducing himself and thanking the organiser for distributing blankets to differently-abled persons, he is seen getting up from the wheelchair and walking away. This video has been labelled as a Bharatiya Janata Party (BJP) propaganda video with the insinuation that the event was stage-managed and those receiving blankets were masquerading as differently-abled persons.

On February 3, Facebook user, Rodney Almeida posted the viral video and said, “BJP distributing blankets to the disabled people, before turning off the camera the disabled walked away.” This video has over 90,000 views.

BJP distributing blankets to the disabled people, before turning off the camera the disabled walked away. 🤣🤣🤣

Similarly, Syed Abdulmuqtadir uploaded the viral video along with the same text posted by Almeida. It has over 86,000 views. Several Twitter and Facebook users have shared the viral video, claiming it’s a BJP propaganda video.

Recently, the same video had gone viral with the claim that Aam Aadmi Party (AAP) distributed blankets to people who were masquerading as differently-abled persons. On February 4, Alt News published a fact-check report on the same.

The man in the viral video introduced himself as Ramesh Singh. In the background, a banner can be spotted with a Hindi text which reads ‘Digital Saksharta Sansthan [Translated from डिजिटल साक्षरता संस्थान].’ 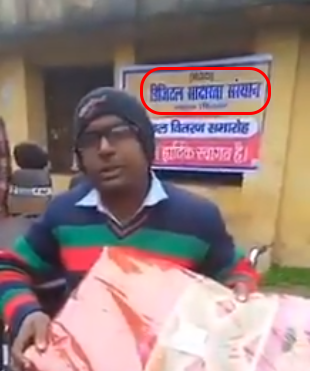 A second keyword search led us to the Facebook page of ‘Digital Sakshrta Sansthan’. According to the page, it is an NGO based out of Seohara, Uttar Pradesh. On the same profile, Alt News found a fact-check report by Abhitak, a Moradabad-based Hindi news channel. We found a video report on Abhitak‘s YouTube channel as well.

In the Abhitak report, Singh displayed his proof of disability and said, “There is some misunderstanding among the masses. I’m really disabled and I have proof. I have UD ID (Unique Disability ID) which states I’ve 40% disability.” The reporter asked him to comment on the controversial moment when he stood up from the wheelchair, Singh replied, “While receiving the gift, I was made to sit (on the wheelchair). When I stood up, people (who saw the video) couldn’t understand the nature of my disability.”

Alt News also noticed that Digital Sakshrta Sansthan’s Facebook account has uploaded several other videos from the event. A video uploaded on January 19, shows the full sequence of another man receiving the blanket on a wheelchair and then getting up.

On February 1, The Quint published a fact-check report on the initial claim that the viral video is AAP propaganda video. According to the report, Najam was the reporter on duty for Abhitak. It reported that Singh has a locomotor disability. While speaking to The Quint, Najam said, “The man sitting on the wheelchair is Ramesh Singh and the one giving the blanket is Ravi Saini. AAP is not involved in this in any manner.” The Quint’s report also has photos of Singh’s Unique Disability ID. Alt News has not uploaded the photos in for the sake of privacy.

Alt News did a keyword search and found the Twitter account of Saini, a member of ‘Digital Saksharta Sansthan’. He tweeted local media reports of the event. 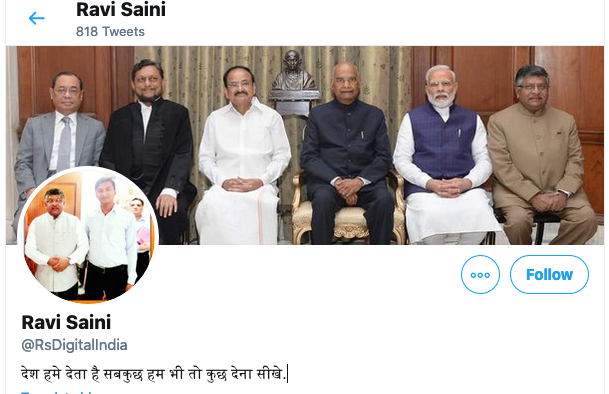 Boomlive also published a fact-check about the claim that the viral video is AAP propaganda video on February 2 where Saina was quoted as saying, “I have no political affiliation, I am just a businessman who runs an NGO that helps the government in their programs such as e-literacy including setting up wi-fi in villages and rural areas. I don’t belong to AAP or any political party. I work with the IT Ministry for my projects but there is no political involvement of me or my NGO.”

Therefore, the social media claim that BJP distributed blankets to people masquerading as differently-abled is false.