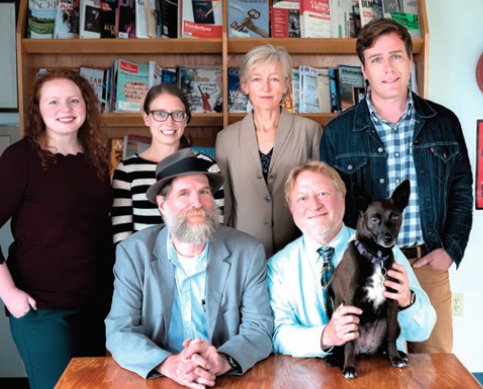 With this edition, The Progressive celebrates a milestone: 111 years of continuous publication. In its inaugural issue on January 9, 1909, the lead editorial by Wisconsin Senator “Fighting Bob” La Follette declared that the magazine’s mission would be “winning back for the people the complete power over government,” against the encroachments of party machines and corporate monopolies.

I am reminded of La Follette’s words as I read Astra Taylor’s essay on democracy, part of our package of articles that present “A Progressive Platform for 2020.” Today, she writes, “we do not live in a system where democratic popular will can be translated into policy change that is efficiently and effectively implemented.” It is this corruption of the process, this undoing of the will of the people, that this magazine was founded to fight.

Some of the ideas these writers espouse have been embraced by candidates seeking the Democratic nomination for President; others go far beyond what these candidates have taken up. Our goal is not to align with the Democrats but to create a clear roadmap for them to follow.

This is potentially a time of great opportunity for progressives, as the nation—a majority of it, anyway—recoils from the thunderous incompetence and venality of President Donald Trump. As in 2018, which saw the election of such dynamic figures as Alexandria Ocasio-Cortez, Rashida Tlaib, Ayanna Pressley, and Ilhan Omar, the populace is energized behind a yearning for progressive change. This is our time to build a path to the future.

This is also a time of great transition for The Progressive. With this issue we bid farewell to three valued members of our staff: Online Media Editor Mrill Ingram, Associate Editor Alexandra (Allie) Tempus, and Office Manager Jess Pernsteiner—all of whom are moving on to other opportunities.

Mrill, who came to the magazine in 2015, oversaw the redesign of our website and a revitalization of its mission. We now have a vibrant site and a strong stable of regular contributors. Mrill, a natural leader, also helped guide The Progressive through strategic planning processes, to help us find our way in trying times.

Allie, a Wisconsin native who has worked for several publications, including Rolling Stone and The Nation, and served as a researcher on Naomi Klein’s seminal 2014 book, This Changes Everything, came to The Progressive in mid-2017. She helped bring new writers into our fold and escalated our commitment to reporting on climate change and racial justice.

Jess, our office maven, brought tremendous energy and competence to the many tasks involved in running a national publication from a small office in Madison, Wisconsin. And as coordinator of the Progressive Media Project, which places op-eds in newspapers and on websites throughout the country (see the ad showing this project’s impressive reach on page 40), her duties included editing and workshop presentations.

There are many rewards and some heavy weights of obligation that come with keeping alive a 111-year-old tradition. These three workers poured their passion into The Progressive, making it better, fairer, more diverse, and more relevant. Kudos also to Alice Herman, a former intern who agreed to come help us out during this transition, and has done so with great skill and commitment.

I am proud to have worked with these colleagues, all of whom are headed to bright futures, and all of whom have helped set the stage for The Progressive’s own future success.