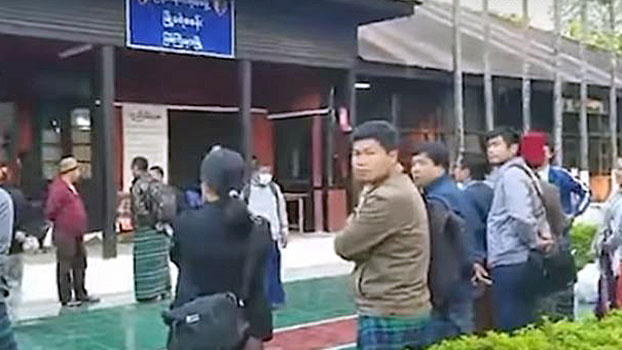 The Myanmar military has filed a lawsuit against two ethnic Kachin Baptist pastors for taking part in a ceremony the army claimed glorified the resistance activities of a rebel ethnic army in northern Myanmar’s Kachin state, religious leaders and police said Friday.

Police in the state capital Myitkyina detained pastors U Bimar Dau Lwam and Tu Tham at noon on Thursday and are conducting an investigation of them following their participation in an event a day earlier marking the 60th anniversary of Kachin Revolutionary Day.

An official at the city’s No. 1 Police Station said that the two men were taken to a local court for a remand order.

The two pastors agreed to host the event after a group of Kachin residents received permission to hold it from the Kachin Baptist Convention (KBC), a Christian denomination in Myanmar.

The Myanmar Army told police to take action against those involved in the ceremony about the history of the Kachin Independence Army (KIA), an insurgent group fighting the government military, at the Jaw Bawm Sutaung Pyae Pagoda, sources told RFA’s Myanmar Service.

The Myanmar military filed the lawsuit because it viewed the performance as damaging to its reputation.

The two pastors are being charged under Section 17(1) of Myanmar’s colonial-era Unlawful Associations Act, which carries a three-year prison sentence for those who interact with an unlawful association, such as an ethnic armed group like the KIA, religious leaders said.

“I wonder if it [the performance] was unpleasant for the government,” said Maji La Wawm, a spokesman for the pair. “The reason for taking action appears to be so.”

He noted that the performers wore military uniforms with no emblems during the event and used plastic guns.

“It was a brief performance about the history of the KIA,” La Wawm said, adding that the two pastors were involved in a separate fundraising event that evening at the church, but did not participate in the revolutionary ceremony earlier in the day.

Hkalam Samson, chairman of the Kachin Baptist Convention (KBC), said members of the Christian organization and the Kachin National Consultative Assembly met on Friday with Major General Teza Kyaw, chief of the Myanmar military’s Northern Command, to discuss the release of the two pastors.

He said the Kachin negotiators argued that the ceremony only highlighted the tragedies of war and aimed to support peace.

“We’re writing a letter appealing to them to look forward to peace and for everyone to cooperate following the meeting with the commander of the Northern Command,” he said. “The case can then be dismissed, and the two pastors can be brought back.”

The Kachin National Consultative Assembly has issued a statement calling for the release of the two pastors.

“They [authorities] should accept our activities while building trust with ethnic armed groups for peace and try to move forward to [the formation of] a federal nation,” said ethnic Kachin youth activist Paul Lu.

“The event aimed to remember the existence of an ethnic group, so there could be an obstacle for coexistence in a federal nation if one fails to accept or understand that,” he added.

Last year members of a drama troupe were jailed for performing thangyat, a satirical work akin to modern slam poetry that usually includes humorous criticism of politics, society, and the military.