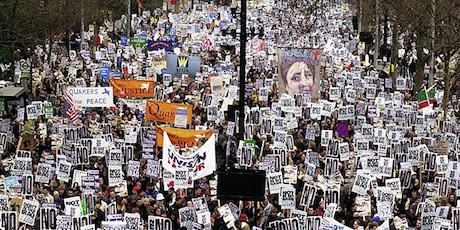 February 15 marks the day, 17 years ago, when global demonstrations against the pending Iraq invasion were so massive that the New York Times called world public opinion “the second superpower.” But the U.S. ignored it and invaded Iraq anyway. So what has become of the momentous hopes of that day?

The U.S. military has not won a war since 1945, unless you count recovering the tiny colonial outposts of Grenada, Panama and Kuwait, but there is one threat it has consistently outmanoeuvred without firing more than a few deadly rifle shots and some tear gas. Ironically, this existential threat is the very one that could peacefully cut it down to size and take away its most dangerous and expensive weapons: its own peace-loving citizens.

During the Vietnam war, young Americans facing a life-and-death draft lottery built a powerful anti-war movement. President Nixon proposed ending the draft as a way to undermine the peace movement, since he believed that young people would stop protesting the war once they were no longer obligated to fight. In 1973, the draft was ended, leaving a volunteer army that insulated the vast majority of Americans from the deadly impact of America’s wars.

Despite the lack of a draft, a new anti-war movement—this time with global reach—sprung up in the period between the crimes of 9/11 and the illegal U.S. invasion of Iraq in March 2003. The February 15th, 2003, protests were the largest demonstrations in human history, uniting people around the world in opposition to the unthinkable prospect that the U.S. would actually launch its threatened “shock and awe” assault on Iraq. Some 30 million people in 800 cities took part on every continent, including Antarctica. This massive repudiation of war, memorialized in the documentary We Are Many, led New York Times journalist Patrick E. Tyler to comment that there were now two superpowers on the planet: the United States and world public opinion.

The U.S. war machine demonstrated total disdain for its upstart rival, and unleashed an illegal war based on lies that has now raged on through many phases of violence and chaos for 17 years. With no end in sight to U.S. and allied wars in Afghanistan, Iraq, Somalia, Libya, Syria, Palestine, Yemen and West Africa, and Trump’s escalating diplomatic and economic warfare against Iran, Venezuela and North Korea threatening to explode into new wars, where is the second superpower now, when we need it more than ever?

Since the U.S. assassination of Iran’s General Soleimani in Iraq on January 2nd, the peace movement has reemerged onto the streets, including people who marched in February 2003 and new activists too young to remember a time when the U.S. was not at war. There have been three separate days of protest, one on January 4th, another on the 9th and a global day of action on the 25th. The rallies took place in hundreds of cities, but they did not attract nearly the numbers who came out to protest the pending war with Iraq in 2003, or even those of the smaller rallies and vigils that continued as the Iraq war spiralled out of control until at least 2007.

Our failure to stop the U.S. war on Iraq in 2003 was deeply discouraging. But the number of people active in the U.S. anti-war movement shrank even more after the 2008 election of Barack Obama. Many people did not want to protest the nation’s first black president, and many, including the Nobel Peace Prize Committee, really believed he would be a “peace president.”

While Obama reluctantly honored Bush’s agreement with the Iraqi government to withdraw US troops from Iraq and he signed the Iran nuclear deal, he was far from a peace president. He oversaw a new doctrine of covert and proxy war that substantially reduced U.S. military casualties, but unleashed an escalation of the war in Afghanistan, a campaign against ISIS in Iraq and Syria that destroyed entire cities, a ten-fold increase in CIA drone strikes on Pakistan, Yemen and Somalia, and bloody proxy wars in Libya and Syria that rage on today. In the end, Obama spent more on the military and dropped more bombs on more countries than Bush did. He also refused to hold Bush and his cronies responsible for their war crimes.

Obama’s wars were no more successful than Bush’s in restoring peace or stability to any of those countries or improving the lives of their people. But Obama’s “disguised, quiet, media-free approach” to war made the U.S. state of endless war much more politically sustainable. By reducing U.S. casualties and waging war with less fanfare, he moved America’s wars farther into the shadows and gave the American public an illusion of peace in the midst of endless war, effectively disarming and dividing the peace movement.

Obama’s secretive war policy was backed up by a vicious campaign against any brave whistleblowers who tried to drag it out into the light. Jeffrey Sterling, Thomas Drake, Chelsea Manning, John Kiriakou, Edward Snowden and now Julian Assange have been prosecuted and jailed under unprecedented new interpretations of the WWI-era Espionage Act.

With Donald Trump in the White House, we hear Republicans making the same excuses for Trump—who ran on an anti-war platform—that Democrats made for Obama. First, his supporters accept lip service about wanting to end wars and bring troops home as revealing what the president really wants to do, even as he keeps escalating the wars. Second, they ask us to be patient because, despite all the real world evidence, they are convinced he is working hard behind the scenes for peace. Third, in a final cop-out that undermines their other two arguments, they throw up their hands and say that he is “only” the president, and the Pentagon or “deep state” is too powerful for even him to tame.

Obama and Trump supporters alike have used this shaky tripod of political unaccountability to give the man behind the desk where the buck used to stop an entire deck of “get out of jail free” cards for endless war and war crimes.

Obama and Trump’s “disguised, quiet, media-free approach” to war has inoculated America’s wars and militarism against the virus of democracy, but new social movements have grown up to tackle problems closer to home. The financial crisis led to the rise of the Occupy Movement, and now the climate crisis and America’s entrenched race and immigration problems have all provoked new grassroots movements. Peace advocates have been encouraging these movements to join the call for major Pentagon cuts, insisting that the hundreds of billions saved could help fund everything from Medicare for All to the Green New Deal to free college tuition.

A few sectors of the peace movement have been showing how to use creative tactics and build diverse movements. The movement for Palestinians’ human and civil rights includes students, Muslim and Jewish groups, as well as black and indigenous groups fighting similar struggles here at home. Also inspirational are campaigns for peace on the Korean peninsula led by Korean Americans, such as Women Cross the DMZ, which has brought together women from North Korea, South Korea and the United States to show the Trump administration what real diplomacy looks like.

There have also been successful popular efforts pushing a reluctant Congress to take anti-war positions. For decades, Congress has been only too happy to leave warmaking to the president, abrogating its constitutional role as the only power authorized to declare war. Thanks to public pressure, there has been a remarkable shift. In 2019, both houses of Congress voted to end U.S. support for the Saudi-led war in Yemen and to ban arms sales to Saudi Arabia for the war in Yemen, although President Trump vetoed both bills.

Now Congress is working on bills to explicitly prohibit an unauthorized war on Iran. These bills prove that public pressure can move Congress, including a Republican-dominated Senate, to reclaim its constitutional powers over war and peace from the executive branch.

Another bright light in Congress is the pioneering work of first-term Congresswoman Ilhan Omar, who recently laid out a series of bills called Pathway to PEACE that challenge our militaristic foreign policy. While her bills will be hard to get passed in Congress, they lay out a marker for where we should be headed. Omar’s office, unlike many others in Congress, actually works directly with grassroots organizations that can push this vision forward.

The presidential election offers an opportunity to push the anti-war agenda. The most effective and committed anti-war champion in the race is Bernie Sanders. The popularity of his call for getting the U.S. out of its imperial interventions and his votes against 84% of military spending bills since 2013 are reflected not only in his poll numbers but also in the way other Democratic candidates are rushing to take similar positions. All now say the U.S. should rejoin the Iran nuclear deal; all have criticized the “bloated” Pentagon budget, despite regularly voting for it; and most have promised to bring U.S. troops home from the greater Middle East.

So, as we look to the future in this election year, what are our chances of reviving the world’s second superpower and ending America’s wars?

Absent a major new war, we are unlikely to see big demonstrations in the streets. But two decades of endless war have created a strong anti-war sentiment among the public.  A 2019 Pew Research Center poll found that 62 percent of Americans said the war in Iraq was not worth fighting and 59 percent said the same for the war in Afghanistan.

On Iran, a September 2019 University of Maryland poll showed that a mere one-fifth of Americans said the U.S. “should be prepared to go to war” to achieve its goals in Iran, while three-quarters said that U.S. goals do not warrant military intervention. Along with the Pentagon’s assessment of how disastrous a war with Iran would be, this public sentiment fueled global protests and condemnation that have temporarily forced Trump to dial down his military escalation and threats against Iran.

So, while our government’s war propaganda has convinced many Americans that we are powerless to stop its catastrophic wars, it has failed to convince most Americans that we are wrong to want to. As on other issues, activism has two main hurdles to overcome: first to convince people that something is wrong; and secondly to show them that, by working together to build a popular movement, we can do something about it.

The peace movement’s small victories demonstrate that we have more power to challenge U.S. militarism than most Americans realize. As more peace-loving people in the U.S. and across the world discover the power they really have, the second superpower we glimpsed briefly on February 15th, 2003 has the potential to rise stronger, more committed and more determined from the ashes of two decades of war.

A new president like Bernie Sanders in the White House would create a new opening for peace. But as on many domestic issues, that opening will only bear fruit and overcome the opposition of powerful vested interests if there is a mass movement behind it every step of the way. If there is a lesson for peace-loving Americans in the Obama and Trump presidencies, it is that we cannot just walk out of the voting booth and leave it to a champion in the White House to end our wars and bring us peace. In the final analysis, it really is up to us. Please join us.