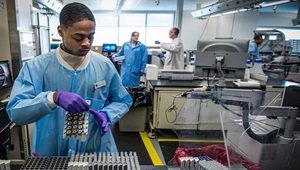 A new and deadly virus from China is coming to get you. Cancel your travel plans, quarantine your grandparents, and don’t let a Chinese person sneeze on you! Social media is all atwitter. Some Uber and Lyft drivers are even refusing to pick up passengers with Chinese-sounding names.

The mainstream media has produced reams of articles, many criticizing China for its mishandling of the crisis.

Let’s calm down for a moment. The new virus produces flu-like symptoms but rarely results in death; it is serious but hardly cause for panic. As of mid-week, the virus has infected more than 60,000 people and killed some 1,370 of them, almost all in China.

Only about two percent of the coronavirus-infected people have died, and they are mostly older with underlying health conditions. By comparison, the death rate was near 100 percent during the early years of the 1980s AIDS pandemic and the 2014 Ebola crisis.

So far, the coronavirus has not caused any deaths in the United States and isn’t a serious threat here, according to Dr. James McLean, a board-certified emergency room doctor and old friend.

“People should be more concerned about regular influenza, which is far more deadly,” Dr. McLean tells me.

Wendel Brunner, the former director of public health in Contra Costa County, California, says the hysteria over the coronavirus follows a familiar pattern.

“Whenever these virus outbreaks occur, the op-ed columns fill up with experts predicting various forms of disaster,” Brunner tells me. “You don’t get published for saying the authorities, especially in China, are doing a good job.”

Brunner says some experts criticize Chinese authorities no matter what they do. “First the Chinese acted too passively, then they acted too aggressively. We are down on China now because it is economically successful.”

So let’s insert a little rationality into the debate. What is the virus and what can be done to contain it?

While scientists are still unsure, it seems likely that the coronavirus originated in live animals and jumped to humans through a market in Wuhan, China. Similarly, doctors aren’t certain exactly how the disease is transmitted, but they suspect it’s spread airborne or through contact with mucus.

You may get it from being around people “coughing, sneezing, shaking hands, or even opening a door handle recently touched by an infected person,” says Dr. McLean.

In December, Wuhan doctors began reporting respiratory illness with severe, flu-like symptoms from an unknown virus. As is too often the case in such medical emergencies, local officials downplayed the problem.

Li Wenliang, a doctor in a hospital respiratory department, posted a warning about the new virus in a private chat group. Someone leaked the message, and it was widely circulated online. Dr. Li hadn’t intended to be a whistleblower. Although what he wrote was true, local police detained him for rumor mongering and forced him to recant. In February, he died after being exposed to one of his coronavirus patients.

China’s Supreme Court later vindicated Dr. Li, noting that his warnings should have been taken seriously. Dr. Li has since become a national hero in China.

That doesn’t let China off the hook, however. China’s socialist system is supposed to allow for constructive criticism of government and Communist Party policies. But frequently, bureaucrats opt to suppress bad medical news, environmental problems, or atrocious factory conditions. China has developed a strong and independent economy, but ordinary Chinese citizens face crackdowns for expressing dissent.

“Local officials in any country never want to acknowledge unpleasant developments,” says Dr. Brunner. “That hesitation in China may well have delayed an earlier response that could have been important.”

A luxury cruise ship docked in Yokohama, Japan, reveals the difficulties in handling the virus. After some people on board contracted coronavirus, almost 3,700 passengers and crew were quarantined. That action prevented the spread of the virus to Yokohama but also increased the number of infected people on board. Afterward, the number of infected people had more than doubled to 175.

Japan’s health ministry has been unable to test some 3,000 people on board for the virus due to a shortage of test kits. Although confined in luxurious conditions with first-world medical care, some passengers complained they are more likely to get sick by staying on board.

“I do not believe they are containing this epidemic by keeping us quarantined,” Gay Courter told The New York Times. “Something is wrong with the plan.”

Because people infected with coronavirus can spread the disease to others before they show symptoms, she says,“Containment may not work within that enclosed population.”

In other words, quarantines may temporarily make the quarantined people sicker.

China faces the same dilemma as Japan, except that it’s protecting 1.4 billion people. It’s no surprise that some Chinese criticize their government, which has proportionately fewer medical resources than Japan.

China has taken extreme measures to contain the epidemic. The central government enforced a quarantine on Wuhan, a city of eleven million people. Many people are staying home, going out only for food and emergencies. Travel to and from Wuhan is prohibited. The government built two hospitals in just two weeks in Wuhan, but there still aren’t enough beds and medical supplies.

Some major airlines have canceled flights in and out of China. Factories are closing due to lack of workers and supplies. Major cities such as Beijing and Shenzhen have all but shut down.

The central government plans to gradually restore normal activity after a two-week quarantine period. It will test every individual in Wuhan, isolate those infected, and allow others to return to normal life.

But even if the vast majority of infected people are identified, a few could slip by, and the virus could spread again. Such a massive quarantine requires government transparency so doctors can accurately track the disease. Dr. McLean suspects Chinese officials have been less than transparent.

“I think the epidemic is a lot worse,” he says. “The numbers are a lot higher.”

Scientists say the coronavirus epidemic could evolve in two ways. It could spread outside China and become a global pandemic. Or, like the 2003 SARS epidemic, Dr. Pan says, “we could stop the disease transmission.” In that earlier epidemic, officials were able to isolate affected people, contain the disease spread, and “public health measures worked.” The virus “burned out.”

For all its shortcomings, Dr. Brunner says the massive quarantine in China “was clearly a bold, decisive act that certainly helps protect not only China but the whole world.”

And the world is waiting to see if that bold act bears results.