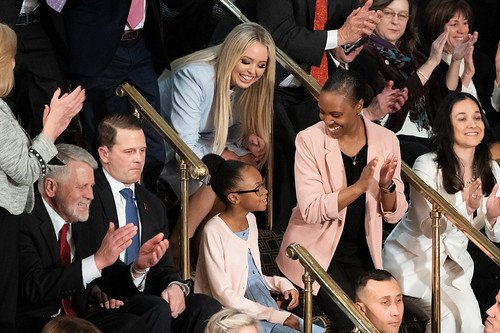 “For too long,” Trump declared in his State of the Union address on February 4, “countless American children have been trapped in failing government schools.”

Trump, to shore up his point, introduced two guests in the audience: Stephanie Davis, a black single mom from Philadelphia, and her fourth-grade daughter, Jayinah, who the President said was on a waitlist in Pennsylvania’s voucher program. Trump then revealed that one of these voucher had magically “become available” for Jayinah.

It turns out that none of this was quite true.

First, federal officials—Trump, included—do not have the power to issue a school voucher for a child in Pennsylvania or any other state. Jayinah was only able to skip a waiting list more than 40,000 applicants for a voucher because of Education Secretary Betsy DeVos, who promised to personally fund her tuition for an indefinite number of years.

Second, Trump called Jayinah’s school a “government school”—the term privatization advocates use when they refer to public schools. But, as The Philadelphia Inquirer reported, she wasn’t enrolled in a public school. She was attending a charter school, which are often privately managed and, though run on public funds, not truly public.

And finally, Trump blamed Pennsylvania Governor Tom Wolf for thwarting the girl’s admission into a private, voucher-supported school. He claimed that Wolf recently vetoed a bill to expand the state’s voucher program, but that’s not the whole picture.

While Wolf did veto an expansion bill, he also passed a budget that expanded the voucher program and provided larger tax breaks for low-income families who are eligible to apply.

The proposed legislation would allow states to give tax credits to individuals and corporations for the cost parents incur when they choose to send their kids to private schools or opt for homeschooling.

Similar tax-credit programs were already set up in eighteen states, as a workaround to provisions in state constitutions that forbid funneling tax money to private religious schools (the majority of private schools are religion-affiliated).

These programs, which distribute vouchers from a nonprofit created by the state, are entirely funded from private individuals and corporations, even though donors are mostly remunerated by getting the tax credit. If this sounds like a legal form of money laundering, that’s because it is.

By now, Trump’s grandstanding for “school choice” has been picked apart and exposed as an empty gesture. But things became more confusing when, six days after his speech, he presented a budget to Congress that clarified his intentions to press forward with an expanded voucher program at all costs—even at the expense of charter schools.

As Education Week reported, Trump’s budget asserted the need for his voucher program while also proposing to cut the Education Department’s budget by $5.6 billion, a 7.8 percent decrease. These proposals were expected.

What was not expected was his call for merging the $440 million for the federal government’s charter school grant program into a block grant awarded to states, which would “eliminate funding specifically allocated to help charter schools expand,” according to EdWeek. “That marks a significant departure from past Trump budget proposals, which have sought to increase funding for the program.”

Trump’s call for ending the federal government’s charter school grant program quickly became one of the most prominent headlines in news reports about his budget.

Spokespeople for the charter school industry were incensed. “The education vision put forward by this budget is chilling,” wrote Nina Rees, the president and CEO of the National Alliance for Public Charter Schools, in a statement. “Without dedicated federal charter school funding, fewer charter schools will open.”

And prominent charter school proponents, such as New York magazine pundit Jonathan Chait, expressed complete astonishment to learn that what Trump and DeVos had intended all along was for the school choice agenda to be vouchers.

They shouldn’t have been.

The whole idea of school choice, according to most policy experts, was the invention of libertarian economist Milton Friedman, who advocated for a fully privatized educational system.

The whole idea of school choice, according to most policy experts, was the invention of libertarian economist Milton Friedman, who advocated for a fully privatized educational system.

The Walton family (of Walmart fame)—whose foundation claims to have funded one of every four charter startups in the nation—put its considerable fortunes into efforts to spread school vouchers and only became supporters of charter schools after their voucher efforts failed in multiple elections and court cases.

“I have known for many years that right-wingers went for charters only because they lay the groundwork for vouchers,” wrote education historian Diane Ravitch, after learning of the Trump Administration’s abandonment of charter schools in its budget. “Charters pave the way for vouchers. They turn citizens, invested in public institutions, into consumers, looking out only for their own child.”

Yet getting lost in the uproar over school choice, charters, and vouchers is a much more consequential issue. Although school choice has been a convenient political compromise between Democrats and Republicans, it’s fallen far short of addressing segregation, inequality, and injustice in the system. In fact, the program often makes those problems worse.

As The Philadelphia Inquirer revealed, Jayinah Davis was enrolled in Math, Science and Technology Community Charter School III (MaST III), which is part of a popular charter network in Philadelphia with a reputation for being “high performing.” But that designation is also deceptive.

A research study I co-authored with the Network for Public Education on the federal government’s charter school grant program—the program Trump now proposes to cut—spotlighted MaST I and MaST II schools in the network because of the multiple grants, totaling over $1.6 million, the schools received.

Despite any indication that MaST III actually served the groups it purported to, DeVos awarded the school a grant of $1,345,000 in 2019.

In other words, the MaST network is an example of how charter schools have rigged the game to claim the mantle of “high performing” by serving mostly non-disadvantaged students.

Yet as the charter school industry continues to pour huge sums of money into its advocacy and lobbying efforts, it does little to address, and arguably worsens, the pervasive inequality that is at the root of the nation’s education problems.

Indeed, as the reformers fretted over the elimination of the federal government’s charter school grants, they were completely silent on Trump axing programs that actually do address inequality, such as those that focus on migrant and homeless students, native Hawaiian and Alaskan students, rural education, after-school programs, and full-service community schools.

So sure, Trump lied during his State of the Union address about saving the educational destiny of a young African American girl in Philadelphia, but that lie exposed a much deeper one: That the political establishment, conservative and liberal alike, has been deceiving us about the goals of school choice—vouchers and charter schools—all along. It’s always been about turning education into a private enterprise.