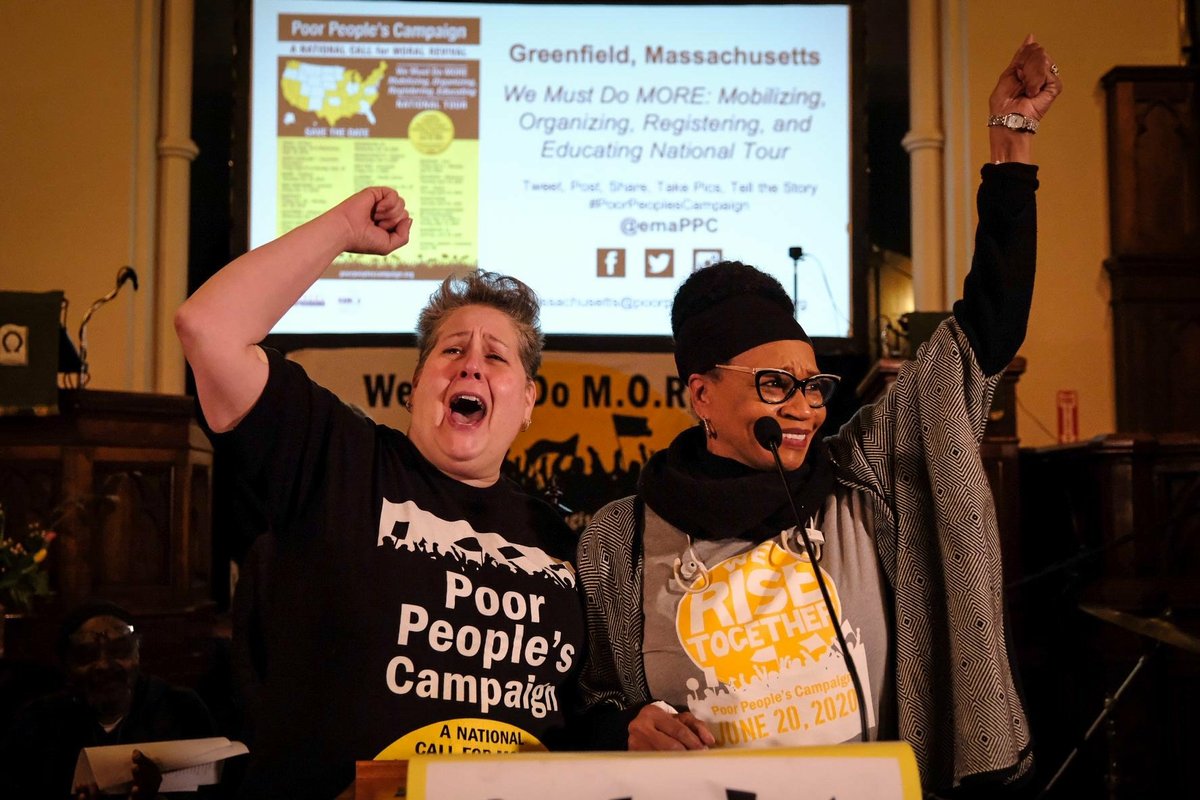 James Shearer was living out of sight and beyond care among Boston’s homeless in the 1980s. Now he is helping to give them a voice.

“Why does this country cater to the rich while allowing working-class men and women, who work multiple jobs, with long hours, to live in places that are unfit for humanity?” asked Shearer, sixty, at a mass meeting on February 5 in the small town of Greenfield in western Massachusetts. “Instead of helping the homeless, they are criminalized, abused, arrested, preyed upon by bullies, and marginalized. And when we die in the street, there is no funeral.”

At least thirteen more are scheduled nationwide by the end of May, leading to a mass meeting and march on June 20.

Shearer is the co-founder of Spare Change News, a publication written and distributed by people who are “currently or formerly homeless, or otherwise low-income individuals.” He spoke as part of “We Must Do M.O.R.E.” (Mobilize, Organize, Register and Educate), organized by the Poor People’s Campaign: A National Call for Moral Revival.

This gathering, which drew about 300 people to Greenfield’s Second Congregational Church, was the group’s eleventh mass meeting. At least thirteen more are scheduled nationwide by the end of May, leading to a mass meeting and march on June 20.

“All roads lead to—where?—Washington, D.C.,” longtime homeless advocate Minister Savina Martin reminded the crowd. She is one of three heads of the coordinating committee for the Massachusetts Poor People’s Campaign. Committees have been formed in forty-two states and the District of Columbia.

This campaign picks up where the original Poor People’s Campaign, called for by the Reverend Dr. Martin Luther King Jr., left off. And it comes with a sweeping set of demands, together with a comprehensive list of initiatives and how to pay for them.

Barber and Theoharis regularly wear stoles with the words “Jesus Was a Poor Man”—a saying that comes from one of the mule train caravans in the 1968 Poor People’s Campaign.

Organizing by the campaign has been going on for more than two years, with such coordinated activities as 40 Days of Moral Action in state capitals and Washington D.C., in 2018.

The upcoming mass gathering and march in Washington, D.C., comes after the presidential primaries but before the Democratic and Republican conventions. It is intended to refocus the political dialogue on the nation’s 140 million poor and low-income people. An immediate goal is to have a presidential debate about poverty.

These campaign’s mass meetings not only build support for the June event but also put a spotlight on local issues.

Often after a “testifier” makes a presentation, a chant—or variation of it—echoes through the crowd. “Somebody is hurting our people, and it has gone on far too long. And we won’t be silent anymore.”

At the Greenfield meeting, Maria Colville told of her struggles to pay her bills as a health care worker. “The only evidence I had to show after thirty years of hard work was tiredness, poor health, and deep despair.”

But Colville has fought back, becoming active in her local union, 1199SEIU, and is no longer willing to be one of the many “hostages of poverty.”

“Broken, busted, and disgusted—in one voice, speaking truth to power,” she said.

The notion that victims of poverty are no longer willing to be blamed for their plight surfaced again and again at the mass meetings.

And Joannah Whitney spoke about a Supplemental Security Income system that does not allow her to have more than $2,000 in her bank account to receive her monthly SSI check. “If you are even a few dollars over, they claw back the entire month’s check. They call this ‘guarding against fraud,’” she said.

The notion that victims of poverty are no longer willing to be blamed for their plight surfaced again and again at the mass meetings.

At the October Campaign meeting in Portland, Maine, Mary Berard explained how her mother, who suffered from kidney disease, felt responsible for the financial strain put on the family.

“None of this was my mother’s fault,” said Berard. “This is the fault of a system that only saw her as a dollar sign, not as a person.”

The demands of the new Poor People’s Campaign are far-reaching—from repealing restrictive voting state laws to revamping spending priorities away from the military and toward human needs.

They are spelled out in the Poor People’s Campaign’s Moral Budget as well as the Moral Agenda and Declaration of Fundamental Rights. The cost of not addressing poverty is highlighted by the report: “The Souls of Poor Folk: Auditing America.”

To match their broad scope, the group adopts a similar big-tent approach to organizing. As Theoharis tells The Progressive, “When you lift from the bottom, everybody rises.” The campaign, she adds, is an “organism” that coordinates with existing groups. Barber’s Repairers of the Breach organization in Goldsboro, North Carolina, and Theoharis’ Kairos Center in Manhattan are what Theoharis calls the campaign’s anchor organizations.

At the June 20 march on Washington, the poor will be heard. “We will build a stage, and those who will get to speak from that stage will be poor and impacted people—telling their stories,” says Theoharis.

Barber outlined the goals of the Campaign in his closing address at a mass meeting on the “M.O.R.E.” tour in El Paso this past September.

“We are here because of systemic racism, systemic poverty, ecological devastation and the ravages of a war economy, and a false, distorted, moral religious nationalism is lying to the people and continuing to harm us,” said Barber.

It made perfect sense that El Paso was the kickoff city for the tour. The city on Texas’s southern border has borne the brunt of the Trump Administration’s anti-immigrant initiatives and was the site of the mass shooting at Walmart by a man who allegedly told police he wanted to kill “Mexicans.”

“El Paso also became the symbol of resistance,” says Fernando Garcia, executive director of the Border Network for Human Rights, in an interview.

Held in downtown El Paso, in La Plaza de los Lagartos, the mass meeting itself became an act of resistance, with demonstrators singing “We Shall Not Be Moved” and holding signs with slogans like “No Human Being Will Ever Be Illegal.”

“The Poor People’s Campaign gives us the umbrella to coordinate the struggles of our community with other communities,” says Garcia. “Border Patrol abuse is no different from law enforcement abuse in Chicago. It’s all about criminalizing our communities.”

The connection between local and national issues also surfaced at the September 30 gathering in Greensboro, North Carolina.

“When they talk about poverty in the halls of power, they don’t talk about the real reason why poverty exists,” said Jamila Allen in her testimony. “And that cause is this: poverty wages.”

A twenty-year-old food service worker, Allen has been an active member of NC Raise Up, the Durham-based group leading the “Fight for $15” minimum wage in that state.

Allen, who earns $9.25 an hour at a fast food restaurant, has had to put her dream of going to college on hold. Like many in her position, she struggles to afford the basics.

“My fellow member, who works two jobs, has to sleep in his car with his kids,” said Allen. “My co-worker stretches food stamps as far as she can. At the end of every month, she has to see her children go without.”

The state campaign coordinating committees work with existing activist groups in many ways.

Demond Meeks, a forty-one-year-old organizer with 1199SEIU in Rochester, New York, has been active with the Poor People’s Campaign, not only going to Albany for 40 Days of Moral Action in 2018 but also working with New York’s coordinating committee for the Campaign as well as local groups.

“It all about coalition building,” says Meeks, who has been involved in local campaigns on issues ranging from tenant rights to voter registration and turnout.

Brenda Caldwell, a student at North Carolina A&T State University, testified at the Greensboro mass meeting on restrictive voter identification requirements and how the redistricting of 2016 split the campus into two Congressional districts. Previously, the entire campus of this historically black college was in one district.

“I am passionate about fighting voter suppression because I have seen firsthand the effects of it,” said Caldwell.

Caldwell has championed voter registration. “This month alone, I have single-handedly registered 500 students.”

The mass meeting in Des Moines, Iowa, on January 15—the day after the Democratic presidential debate—included searing comments about the plight of farmers by Iowa activist Brenda Brink.

“I know what rural Iowa was like before the corporate-owned, hog farming, factory farms were allowed in. They pushed out the independent, small farmers,” said Brink, who is sixty-two and grew up on a small farm in southwest Iowa.

Over the past two decades, the number of corporate farms has increased fourfold to around 10,000. Twenty-six of Iowa’s counties have called for greater regulation or even a moratorium on factory farms.

“And now we have pollution—pollution of water, air, and our political process,” said Brink, a retired dietitian who made an unsuccessful bid for the state legislature in 2018.

When the movement marches on in Washington, D.C., this year, local concerns like these will get renewed national attention.

Jonathan Wilson-Hartgrove, a Durham-based member of the Poor People’s Campaign’s national steering committee, leaves little doubt that this gathering won’t be the last time public officials hear from the campaign.

“We are trying to hold people who are running for office, people who are in office, accountable, saying how the policies they are pursuing will benefit poor people,” he says.