Just before noon on Monday, New York City Mayor Bill de Blasio stood on the sidelines of a soccer tournament eating elote. De Blasio, who dropped out of the presidential race in September, had endorsed Sen. Bernie Sanders for president the Friday before and spent the holiday weekend stumping for him in Nevada, stopping by the small tournament at a Las Vegas high school to test out a few Spanish phrases on the players.

One of many events dubbed “Unidos con Bernie,” the campaign-organized tournament was held on the the east side of the city, home to the largest Latino population in the state and the campaign’s first Nevada field office.

To conclude the Presidents’ Day festivities — which featured tacos, paletas, and a trophy for the champions — campaign staff and volunteers drove the few dozen young participants to nearby early caucus sites.

Danny Parra, a 19-year-old student who played in the tournament, told The Intercept that he’s voting for Sanders specifically because of the campaign’s consistent outreach. He added that he doesn’t really “follow politics,” but became interested in Sanders because he was always seeing the campaign’s “little stands” on his community college campus.

“I appreciate that we’re getting looked upon because that doesn’t happen really in presidential elections,” Parra said. “I just think it’s really cool he’s looking out for us, trying to take care of us, like we have a voice too, like we may be small but every vote counts. It’s just something I really appreciate from the bottom of my heart.”

Though Sanders has polled favorably among Latino voters throughout the 2020 primary, his popularity with the electorate, which helped carry him to a wide popular-vote victory in Iowa, has surged in the lead-up to the Nevada caucuses — by one poll, he has over 60 percent of the Latino vote.

The campaign, which has knocked on more than 200,000 doors in Nevada in the past 17 days, is also getting organizing help from two major Latino groups. Mijente and Make the Road Action, an immigrant rights group, have thrown their support behind Sanders with their first-ever presidential endorsements, and each has a significant ground presence.

And out of all the Democratic candidates running for the nomination, Latinos gave the most political donations to Sanders, contributing almost $8.3 million to the campaign in 2019, according to an analysis of campaign finance data by Plus Three, a technology company. The analysis, first reported by NBC News last week, found that 36 percent of Latinos’ dollars went to the democratic socialist.

Top/Left: Chuck Rocha, a senior Sanders adviser, broadcasts from the soccer tournament to his social media followers. Center: David Crow displays pins from his Bernie Bus. Bottom/Right: Laura Becerra, the Latinx constituency organizer for the Sanders campaign, holds up the winning trophy for the tournament.Photos: Krystal Ramirez for The Intercept

But Sanders does face a hurdle in his effort to win over Latinos in the state: the leadership of the powerful Culinary Union, which represents many Vegas casino workers. The Culinary Union — aka Unite Here Local 226 — has been escalating its attacks against Sanders over his support of Medicare for All. Those attacks initially singled out both Sanders and Sen. Elizabeth Warren, both of whom have endorsed Medicare for All, but the fire has been trained solely on Sanders as the caucuses approach. With English- and Spanish-language flyers, texts, and emails to its 60,000 members, leaders warned that Medicare for All would “end Culinary health care.”

Then, following outcry from progressives, the union accused Sanders supporters of “viciously” attacking the group, saying that they were flooded with threatening phone calls, emails, and messages. Two top Culinary officials shared examples of the kind of harassment they received with the Nevada Independent, but at least one — a commenter on a Nevada Independent article that referred to members of the Culinary Union as “illegals” — had also made anti-Sanders comments, a fact that was not originally included in the article. When asked for specific examples of harassment from Sanders supporters, union spokesperson Bethany Khan told The Intercept that most are with the Las Vegas Metropolitan Police Department “as we are in the process of filing a report, so not being shared at this time,” adding that she has also begun to post some on her personal social media account.

At a presidential forum with Culinary Union workers on Tuesday night, Warren and Sen. Amy Klobuchar, both of whom are polling abysmally with Latinos, made a last-minute pitch for their support. Culinary secretary-treasurer Geoconda Argüello-Kline opened by talking about “terrible attacks from Senator Sanders’s followers.” Former South Bend Mayor Pete Buttigieg, who couldn’t make it to the event because of a CNN town hall, told the workers in a prerecorded video that he stands with them “whether it is bullies online or bullies in the White House.”

In one of the most cringeworthy campaign moments so far, Klobuchar opened her address to the Culinary workers by telling the predominantly Latinx audience: “My name is Amy, but when I took Spanish in fourth grade, my name was Elena.” She added that she was given the name because she couldn’t roll her R’s. There are no R’s in “Amy,” and the anecdote, which drew blank stares from the audience, was also relentlessly mocked online.

Warren leaned heavily into women’s rights issues, telling the audience, many of whom work as housekeepers, that the White House is a mess and “when you’ve got a mess and you really need it cleaned up, you call a woman and get the job done,” deploying an unusually gender-normative punchline for a candidate who has been highly conscious of the politics of her language.

After the event, Maira Acasada Tatum, a housekeeper at the Waldorf Astoria Las Vegas, said she was probably going to caucus for Warren because of her stance on raising the federal minimum wage. “I have kids and go into work and only make $8, $9 an hour,” she said, adding that she doesn’t know who her second choice is yet. When asked about her thoughts on Medicare for All, she replied in Spanish that she didn’t understand it very well. Photo: Krystal Ramirez for The Intercept

For the first time, Nevada is holding several days of early voting ahead of its February 22 caucuses in an effort to make the election process more accessible. At these early-voting locations, where same-day registration is allowed, participants fill out a ballot using ranked-choice voting, selecting at least three and up to five of their top Democratic candidates. According to the state’s Democratic Party, more than 36,000 people participated in the first three days of early caucus voting, and 56 percent of the people who turned out on Saturday were first-time caucus-goers. On the final day of voting, Tuesday, a staggering 33,000 waited in long lines to caucus. Only 84,000 total voted in the 2016 caucuses, which did not include early voting.

One poll, conducted by the progressive think tank Data for Progress, found that 66 percent of Hispanic voters in Nevada support Sanders. No other candidate made it out of the single digits. And last week, a Morning Consult poll showed the democratic socialist with a staggering lead among Hispanic voters, jumping 10 points with the demographic the day after winning the New Hampshire primary. According to the poll, Sanders had the highest support among the group at 48 percent, followed by Mike Bloomberg at 17 percent and a distant Joe Biden at 13 percent. But a new Telemundo poll found Sanders and Biden in a virtual tie for the state’s Latino vote. Biden had a narrow lead at 34 percent to Sanders’s 31 percent, with a margin of error of 4 percentage points.

Biden, who’s counting on black voters in South Carolina to save his chances at the nomination, has been struggling to win over Latino voters, which will almost certainly hurt his chances in states like California and Texas, two delegate-rich states with the largest Latino populations in the country, as well as in Nevada. The former vice president has for the most part refused to grapple with Barack Obama’s history of being the “deporter in chief,” as the head of the National Council of La Raza declared him in 2014. He’s received fierce backlash from immigrant rights activists and up until this weekend, repeatedly refused to apologize for the harm inflicted by the Obama administration’s deportation machine, instead implying that he internally opposed the policy. Outside of a Las Vegas campaign event Tuesday, a group of activists confronted him for not committing to stopping all deportations.

Buttigieg, Warren, and Klobuchar also have teams dedicated to Latino outreach, but the candidates’ efforts pale in comparison to Sanders and in some cases, have backfired. During an interview with Spanish-language station Telemundo last week, both Klobuchar and billionaire Tom Steyer couldn’t name the president of Mexico. The Minnesota senator admitted that she didn’t know his name while Steyer said he “forgot.” (Mexican President Andrés Manuel López Obrador also goes by the initials “AMLO.”) With the caucuses just three days away, Klobuchar, a famously difficult boss, hasn’t filled basic positions, including hiring a “Nevada operations director.” Steyer’s strategy, meanwhile, has been to pump $14.7 million into the state and flood the airwaves with ads.

As for the Warren campaign’s Nevada field operation, a half-dozen women of color departed the 70-person team with complaints of a “toxic work environment” in the run-up to the caucuses, Politico reported. According to the women, the problems within the campaign hurt their broader efforts to engage Latinos. Spanish-language literature arrived late, “there were too few Spanish-speaking organizers” despite requests to hire more, and “they felt it was a constant battle to set up events in Spanish.” 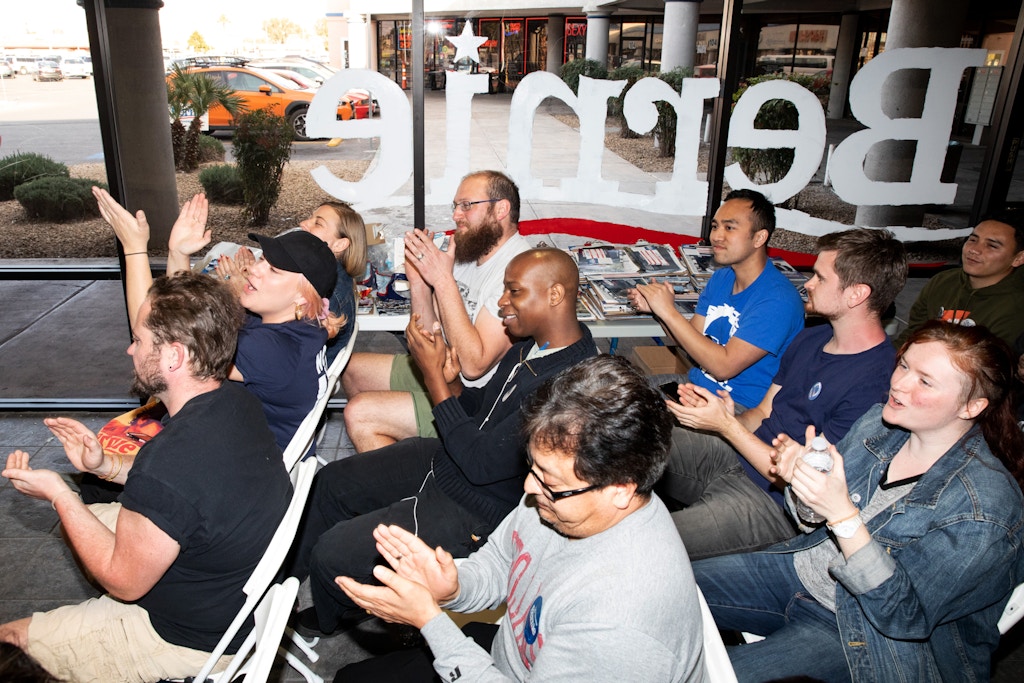 Voters, volunteers, and staff cheer during an event at the Bernie Sanders East Las Vegas Office on Feb 17, 2020.

Photo: Krystal Ramirez for The Intercept

“Tío Bernie,” as many of his Latino supporters affectionately call him, owes much of his success to the campaign’s outreach efforts. His policy positions, particularly involving issues like health care and economic justice, contribute to the appeal, argued Deputy Nevada Field Director Michael Ramirez. But the campaign made the decision to prioritize Latino outreach since the beginning, Chuck Rocha, a senior Sanders adviser, said, breaking with the traditional Democratic strategy of focusing on likely voters — which typically means white and older voters — then scrambling for Latino support in the final stretch.

“We started talking to people in Spanish here before we started talking to people in English, so to me that’s very intentional organizing showing the community that we respect them, that we’re going to be here, and that we’re not going to leave,” said Rocha. The Democratic Party’s decadeslong failure to activate Latino voters has created a self-feeding cycle of disengagement: Candidates and campaigns don’t expect them to vote so they don’t bother asking them to, or at least not on the scale necessary for significant mobilization. Latino voters, poised to be the largest nonwhite eligible voting bloc in 2020, are crucial to winning the presidency and have been playing a key role in Sanders’s rise.

“So I think that’s the key to our success, is that we knew that Bernie Sanders was popular with Latinos,” Rocha continued. “But we had never really done the deep-dive organizing within the community, making sure that they knew everything about him so they can go tell their friends and their neighbors. And that’s a big part of what you’re seeing today with this soccer tournament, there’s community-based events, which are key. But community-based events alone will not win you the elections — spending lots of money to talk to lots of Latinos is how you win the elections.”