Several Twitter users have shared screenshots of a provocative tweet posted by a Twitter handle ‘Dilawar Shaikh (@DilawarShaikh_)’. In the tweet Shaikh can be seen calling for “butchering” of Hindus to “teach them a lesson”. The now-deleted profile of Shaikh claimed that he was a “correspondent at Al Jazeera, previously worked at The Wire. Inspired by Rana Ayyub.” 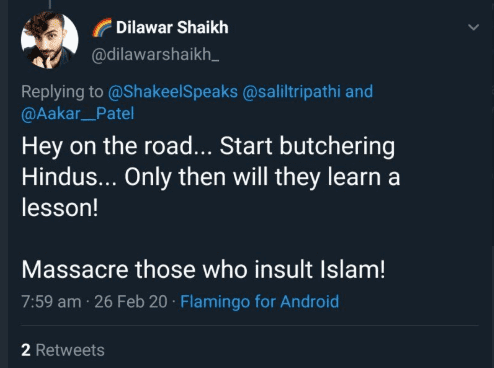 The above tweet was posted on February 26, but it was hardly given any attention until March 6 when it was widely shared by several users tagging Al Jazeera. The first to do so was @desimojito.

The screenshots shared by @desimojito were also shared by Pakistani Canadian author, Tarek Fatah and Australian, Mohammed Tawhidi, who calls himself Imam of Peace.

Al-Jazeera’s correspondent in Cardiff, Wales, calls for the butchering of Hindus and massacre of all those who insult (his version of) Islam. He has deactivated his account after we exposed him.

This is the type of filth that has infested the UK. pic.twitter.com/SwHojt1GZU

“Massacre those who insult #Islam“

Meet @DilawarShaikh_ “correspondent of @AlJazeera” in Cardiff, Wales and is “inspired by @RanaAyyub.”

Shaikh wants to “start butchering #Hindus,” bcoz “only then they [Hindus] will learn a lesson.”

Right-wing portal OpIndia also made the same claim before deleting their article without any clarification.

Smita Prakash, the editor of ANI also inquired if the person is employed with Al Jazeera in response to a tweet by Abhijit Iyer-Mitra.

This is worse. Is he really a journalist working for Al Jazeera? Also what are Twitter rules here? https://t.co/UImuVbHhmY

No affiliation to Al Jazeera, The Wire

The claim made by Shaikh that he worked with Al Jazeera and The Wire is false. In response to several Twitter users tagging Al Jazeera with the tweets of Shaikh, the channel issued a clarification stating, “This is a spurious account and has no relation or affiliation to Al Jazeera. The Network doesn’t have any journalist by the name of Dilawar Shaikh.”

Founder-Editor of The Wire, Siddharth Varadarajan also clarified that “no one of this name has ever worked at The Wire.”

No one of this name has ever worked at The Wire.

It is interesting to note that while the profile was created in September 2013, it had only 57 followers and had no tweets before Feb 25, 2020.

The account is now deactivated but Alt News was able to access the archive a past link.

The archive showed the snapshot of the page as it appeared on 26 Feb 2020 17:02:13 GMT. Interestingly there is no mention of either The Wire or Al Jazeera in the profile. This points out that the profile was altered and a reference to The Wire, Al Jazeera and Rana Ayyub was added sometime between February 26 and March 6. In other words, after the provocative tweet was made, and before it was amplified by @desimojito.

A quick glance through the tweets and retweets of Dilawar Shaikh reveals patterns consistent with right-wing Hindutva nationalist profiles. From retweeting anti-Muslim posts to abusing Rana Ayyub, you can find it all on the timeline.

Alt News has not been able to establish who was behind the profile. All that is known at this stage is that @desimojoto was the first to trigger outrage about the tweets. Incidentally, this is not the first time that @desimojito has been the first to give voice to tweets from dubious profiles created with Muslim identity. However, it is clear that the bio section of the Twitter profile was altered with a malicious motive, and provacative tweets were posted