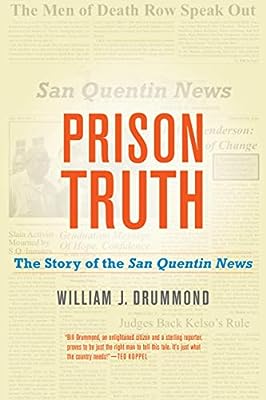 “Prison Truth: The Story of the San Quentin News”
Purchase in the Truthdig Bazaar

In 2017, Oprah Winfrey visited Pelican Bay State Prison in California for “60 Minutes” and openly empathized with an inmate’s predicament. It was a departure from the standard primetime interviews with an inmate in which the journalist extracts lurid details about crimes. (Dr. Phil once asked a man convicted of murdering his mother with a sledgehammer what it sounded like.)

As celebrated journalist and UC Berkeley professor William Drummond notes in his new book, “Prison Truth,” Oprah’s empathetic interview was another milestone in the media’s portrayal of prisons. It represented a shift away from the violence and brutality of the tough-on-crime era and toward the prison reform narrative of our present day.

Drummond’s book is about the recent rebirth of the San Quentin News, a newspaper written, edited, and published by inmates at San Quentin prison. This newspaper delivered something the world has for too long suppressed: humanizing stories of prisoners, told by prisoners. “Inside the dingy confines of the newsroom at San Quentin,” Drummond writes, “a dozen or so convict journalists played a significant role in changing the narrative about prisoners and the way we think about all the people in the penitentiary.”

The San Quentin News was founded in the 1940s. Many other prisons founded newsletters, papers, and magazines around that time (there were 250 in 1959 according to an article in The Nation), including the famous Angolite, a magazine published in Angola prison in Louisiana. But as Drummond notes, while the Angolite “enjoyed remarkable editorial freedom[,] California prison publications were not so lucky.” Prisoners in San Quentin operated under repressive censorship. A 1980s San Quentin News exposé of rotten prison conditions, including photos of bird-droppings covering the cafeteria, caused the warden to shut the newspaper down for the next couple decades.

When the San Quentin News was restarted in 2008, it primarily focused on uplifting stories: skills gained from training programs, freed inmates who successfully reintegrate into the outside world, and events like plays staged by community groups with inmates. “By definition,” Drummond writes, “San Quentin News operates under a regime of self-censorship.” But as he wisely adds, “It is by no means the only media organization to do so.” For Drummond, this is the paper’s strength. By telling the positive stories of men behind bars, it allows them to move away from the deleterious portrayals of “super-predators” that dominated the last 50 years, and toward the stories of redemption that dovetail with the contemporary prison reform movement. Importantly, the San Quentin News newsroom is racially diverse in a way that the vast majority of US newsrooms are not.

Not only does Drummond’s book chronicle the shifting story of crime, prisons, and prisoners, he helpfully adds to a woeful lack of human stories of prisoners. An entire section of the book is devoted to telling the stories of individual inmates that he worked with in his time advising the SQN. He finds a hero in Arnulfo García, one of the original executive editors after the paper resumed in 2008.

García was a former heroin addict and a victim of California’s Three Strikes Law, serving 60 years to life for breaking into a home. He requested to transfer to San Quentin in 2008 to be closer to his family, but also because he heard the prison had a good number of programs for inmates. At the prison, García dove headfirst into the business of journalism (even though, initially, he didn’t even know how to use a computer). By the time Drummond met him in 2010, he was leading the paper. Drummond, at this moment, was losing his faith in journalism, as successive newspapers shrunk or crumbled. “And then,” Drummond recalls, “along came this handsome Mexican guy with boundless optimism about convict journalists turning the tide of forty years of mass incarceration.”

Drummond is in a good position to evaluate the value of the printed word. He was born in Oakland to black, working-class parents. Two years after he graduated from Columbia Journalism School in 1966, he landed at the Los Angeles Times, where his race meant that he was something of a token figure there. Newsrooms in the United States at the time were exceedingly white. Between 1956 and 1966, the number of African Americans working on US metropolitan newspapers (over 1,700 nationwide) went from 38 to 60.

In the late 1970s, at a time when most newspapers were beginning to sensationalize crime, Drummond pursued fearless stories that confronted race relations, including a prescient one about escalating tensions in California prisons. The media drove a narrative of degeneration at the same time that lawmakers were enacting new mandatory minimum sentences for drug crimes and finding new ways to try teenagers as adults. Tough-on-crime politicians of the 1980s and ’90s ramped up the war on drugs and drove more people of color into California’s prison system.

“This kind of dramatic public policy shift,” Drummond says, “could not have taken place without compliant and docile public opinion. And that is where the insistent drumbeat of news media messages took its toll.” This coincided with the escalating prison population in California (from 25,000 in 1970 to 160,000 in 2016).

Recently though, the narrative began to change. Drummond credits the Netflix series “Orange Is the New Black,” which debuted in 2013, as a turning point in the popular narrative of prison. The public started to see inmates as humans and became more interested in hearing the stories of their lives, beyond the simple details of their crimes.

News has great influence over public opinion; who creates the news affects where that influence takes us as a society. A homogeneous media landscape, depopulated with inmates, aided the rise of the wasteful and ruinous carceral state. For anyone concerned with the prison reform movement, it is critical to engage with the media portrayals of inmates. And for that, “Prison Truth” is an essential book. Today, inmates write their own stories, and it is more important than ever.

This article originally appeared on the Los Angeles Review of Books.