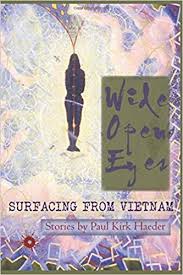 I can’t pretend to be a literary critic, but as an historian and one who’s plenty old enough to know something about the effects of the Viet Nam war, Paul Haeder’s stories about the lasting, inevitable impact of the Viet Nam experience, in his new book Wide Open Eyes:  Surfacing from Vietnam, are just riveting.  The problem is, of course, that people did (and do) not want to open their eyes wide enough to see all the horrors and lasting pain and enduring legacies of that era and that experience.  When I was a junior at SUNY Albany (1970), the editors of the college yearbook, “The Torch,” decided to insert a photo of a severed head of a Vietnamese child hanging from a pike between each senior’s photo.  This was a time of in-your-face political protest and the editors’ statement caused a huge uproar and a lot of discomfort.  I think that’s what Haeder’s stories are doing — opening eyes and creating discomfort by showing how the horror of that severed head appears in the apparent normalcy of people’s lives.  So in many and varied stories, with their many and varied characters, he is involved in a disturbing but very valuable enterprise.

Haeder’s time in Viet Nam in the 90s, working on a biological survey, solidified a connection with a people who “had no stake in America’s way of life.”  They were just being invaded by “another colonialist.”  Just more victims of American Empire.   Haeder sees their experience as a “linchpin” for other American “adventures” in places like Iraq.  I also see it as the beginning of the inflating of the Big Lie as government policy, that Philip Slater wrote about in Pursuit of Loneliness, a book which had a tremendous influence on accelerating my continuing disillusion with America and its so-called superiority and greatness.  And as Haeder says, this awful war came into everyone’s living room — with the media’s attempted sanitation of it — and with those of us who began to know it was a lie, creating huge rifts between generations, friends, families, and huge rifts within the culture.

Each of these stories is an opportunity to go into a deep pool — sometimes of pain, and sometimes of triumph.  One of my favorites is “Conversation in a Second Story Studio Apartment.”  As a bookseller myself, I sympathized with Jacob Weiss, the widower “Bookman,” in his efforts to keep bugs, etc. away from his books (mothballs are a bad idea, however).  Weiss has unsuccessfully tried to instill anti-war sentiments in his Viet Nam vet Air Force Lt. Colonel son, who “exterminated people thirty thousand feet down”; and he has not been entirely successful trying to start a relationship with Ramona Vinkovska, ballet instructor.  These characters are not romantic leads — they are flawed people — and that makes them interesting.  Jacob complains that there in Albuquerque, he can’t sell Yiddish poetry — people want books on horses, and war.  Ramona lost her husband and baby daughter when she lived in New York, a place where she had lost her chance at being a ballerina.  But they both have their dreams, separately and together.  They make do, do the best they can, and put off decisions.  They deal with their tragedies and they survive, helping each other through painful remembrances.

In “Sister of Glaciers,” protagonist Tony’s sister was married to a war dissenter, and Tony is himself about to go to war in Viet Nam.  His sister died in a motorcycle accident and his mother has “acid eating her thoughts” about that loss, and about Tony going off to war.  Tony’s thoughts revolve around the blame that “old men in Washington and corporate America” hold for the war.  Guilt is key here:  Tony is for going to war and for not being able to heed his sister’s pleas against the war, but instead giving in to his father’s desire for Tony to be a soldier.  His father excommunicated his daughter for being with an AWOL soldier.  Haeder says the war killed Tony’s dissenter sister, Her (AWOL) husband’s will to live, and “his mother’s spunk”, along with Tony’s spirit.  Tony finally finds peace after spreading his sister’s ashes into the ocean.  Keeping some of Kathleen’s ashes with him in a leather pouch, he says he wants to take her “whole” into war.  This account is incredibly sad, but Haeder is able to also present people — again — who survive and still have hope.

Sacrifice and sadness and never-ending pain under the surface are also the themes of “Scordato’s Famous Pasta and Shrimp and Peanut Sauce” (which sounds really good to me).  Martino Scordato is lauded for his food and also for his purple hearts, but Viet Cong were among the villagers he saved in 1968, so he is not entirely a hero to Viet Nam vets.  It’s particularly interesting to me as a women’s historian, that Haeder’s character “Di-Di,” Trung Giang McEvoy — the Viet Cong leader that Scordato saved — was named for one of the sisters who were warriors and then martyrs for their people in 40 A.D.  “Di-Di” fought the American invasion, but also eventually married one of those invaders and left Viet Nam, becoming an author who was a “darling” on the talk show circuit.  The convoluted, secret plot of an American attack to kill Major Wat (Di-Di) and her unit, ran into and attacked Scordato’s unit and his mission to save civilians.  This incident was something everyone wanted to stay hidden — another perfect illustration of America’s Big Lies and its constant collateral damage that Haeder displays so well.

When Scordato and his friend Flip talk about what happened that day, Scordato reveals his still painful scars, and when they talk about Trung, Flip says good for her: “Fuck the war. And bravo to her.”  Sums it up nicely.  Flip also talks about the “corporate world” being behind the wars, and how “CIA types” get away with this sort of operation all over South America, but ”nobody cares now.”  All so true.  I like the way Haeder meshes his politics with his fiction — it all fits — not always smoothly, but it fits.  During the reunion of Di-Di, Scordato and Flip, they acknowledge their truths:  the former hate, the attempts to sanitize what happened to them.  And they find common ground — again — in food and the sharing of that truth.  The vets who were there protesting Di-Di’s presence, accepted the food that Di-Di (who, like Scordato also had a restaurant) and Scordato had cooked together — some of them.  When asked by an NPR reporter if he would have saved Trung’s life if he had known who she was and that she would continue her fight against the Americans, Scordato told the reporter he should not ask that question unless he had been there that day.  He asked him which side would he have been on?  With those who shoot to kill with no questions asked, or with those who questioned who should be killed?  We know which side NPR would be on now.

All of the “mainstream” media hype war now — just as they hype the corporate/capitalist world agenda.  Haeder’s characters have a knowledge:  they know too well what such agendas bring.  The “higher-ups” plan and scheme and the people who have to carry out the schemes suffer and pay and try to forget.  My taste in fiction tends to run to romance and happy endings, but sometimes you just have to read something real — something gritty, with warts and all — Paul Haeder-style.

Linda Ford is a women’s historian and antiquarian bookseller in central NY. Her recent book is Women Politicals: Jailed Dissidents from Mother Jones to Lynne Stewart. Read other articles by Linda.