If the Bill of Rights contains no guarantee that a citizen shall be secure against lethal poisons distributed whether by private individuals or by public officials, it is surely only because our forefathers, despite their considerable wisdom and foresight, could conceive of no such problem.
— Rachel Carson, author of Silent Spring

One might think running across a 78-year-old woman living in a cabin on 20 acres near Five Rivers is not unusual. Add to the biography: this activist’s menagerie of a Patagonia parrot; Archie the cockatiel; Patience, a blue-footed Amazon; two Sicilian donkeys, one of which is named Oakie; 25 chickens; two crippled pigeons; her double-barrel shotgun; and a large vegetable garden … and you get Carol Van Strum.

I’m talking with Carol in Debra Fant’s Waldport, Oregon, dining room while she puts away two dozen free range eggs Carol sold her and while I am leafing through Carol’s two penned books that she’s giving me — “my interrogator,” as she jokingly calls me.

At a glance from a typical visitor to our coast, Carol’s appearance (and life) might seem to embody “just one of those quirky (kooky) California transplants who is all into that back-to-the-land philosophy, living out in the boonies to get away from civilization, progress.”

This statement is both true and false as applied to Carol Van Strum.

One book written by Carol is a fictional novel, The Oreo File, concerning protagonist Molly Matthissen, who has been arrested for murdering an FBI agent. The thriller is set in the Pacific Northwest; there are penguins involved (climate refugees); and small-town justice played out.

However, the real meat and potatoes of this profile is Carol’s other book, a nonfiction gem: A Bitter Fog: Herbicides and Human Rights, written in 1983 (updated in 2014), which follows the case of Carol, her husband, four children, neighbors and residents of Lincoln County and their battle with the state of Oregon, chemical companies, the EPA and the Forest Service.

The stories Carol unfolds are dynamic as they cascade through many labyrinths. She has been in the Siuslaw Forest for 45 years, but her origins start in 1940, the start of World War II. Her roots were first set down in Port Chester, Westchester, New York, with a father who went to Cornell and a mother who supported the whims and avocations of their five daughters.

My mom grew up as ‘Shanty Irish.’ She never went to college. When women at cocktail parties from Smith, Radcliff and Bernard colleges asked her where she went to college, my mom said, ‘Barnum and Bailey university.

Carol laughs loudly like a native of County Cork, Ireland.

Her mother trusted her daughters so much that she loaned the family car the summer of 1957 and let three of the girls embark on a road trip across the USA. “We went everywhere. We went camping. Oh, we did our hell raising, but our parents had absolute trust in us.”

Imagine a life well lived, and then jump to 1974 when she, her then husband Steve, their three sons and daughter, and a menagerie of animals moved from the Mendocino area of California to a homestead in Lincoln County — Five Rivers, specifically.

Her presence here, precipitated by what happened in 1975, has literally changed the narrative around the toxic herbicides timber companies, tree farms and road crews spray both by air and land.

Early in A Bitter Fog:

Where the road skirted the riverbank, overhanging shore and water, they directed their hoses into the water, inadvertently spraying the four children fishing down below. The truck moved on, leaving the children gasping in a wet mist that clung to their skin and clothing. With smarting skin, tearing eyes, burning mouths, throats and noses, they stumbled home. By nightfall, all four were sick.

Carol is clear and unyielding when she recalls the beginning of an uphill battle to fight the Forest Service spraying chemicals akin to the Agent Orange infamously used during the Vietnam conflict.

Readers might have a tough time imagining living through that first spraying of 2, 4-D and 2, 4, 5-T on their own children with noses bleeding and guts hemorrhaging. However, the mettle and inspirational fortitude of locals who have lived here for decades embody the power of democratic principles at both a local and global level.

The very idea of individuals and communities having a right to security from poisons and pollutants is being played out daily in this county and state, as well as worldwide. What Carol Van Strum, her neighbors and the citizens of the Oregon Central Coast and Coast Range have had to battle is the very foundation of existence — the right of informed consent.

I am confronting Carol with the proposition that we have always been Guinea pigs — that no real scientific studies have been done (or can be realistically accomplished) to ferret out the harms any individual chemical/toxin can do to us as humans because so many other Post-Industrial Revolution chemicals are working synergistically in our industrialized bodies.

Carol agrees, and what unfolds is hour upon hour of recalling the vagaries of life during and before Lincoln County — starting college, a marriage and family in California after growing up in New York State. She says she picked the University of California-Berkeley “because that was the only university that had a five-dollar application fee … I didn’t have the money for all the other schools’ fees.”

That was in the early 1960s. Soon, the FBI is surveilling their house because she is involved in an underground railroad for returning Vietnam vets who want to go AWOL in Canada and because she is writing articles for a newsletter under the auspices of the Port Chicago Vigil. This anti-war group — started August 7, 1966 by peace activists — gathered at the main gate of the Naval Weapons Station in an attempt to block trucks carrying napalm bombs for shipment to US pilots flying incineration missions over Vietnam.

Carol has all sorts of asides to flavor her narrative — she lived at 2608 Derby Street in Berkeley while the W.E.B. Du Bois Society was located at 2806 Darby. The FBI got the address wrong, and instead of staking out the members of the politically active Du Bois Society, they watched Carol and her family.

Here, history intersects with Carol Van Strum — Du Bois (1869-1963) was an African-American writer, teacher, sociologist and activist whose work transformed the way that the lives of black citizens were seen in American society. Du Bois was an early champion of using data to solve social issues for the black community, and his writing — including his groundbreaking “The Souls of Black Folk” — became essential reading in African-American studies.

She tells me how she wrestled an alligator at the Steinhart Aquarium to assist a veterinarian with the sick reptile. She talks about Twiggy the Toucan, who she rescued as an emaciated dying bird but was brought back to life with Carol’s recipe of “rich pound cake and blueberries mashed up.” Even the vet at the aquarium asked her secret when one of the zoo’s toucans was suffering.

She co-owned Cody’s Bookstore in Berkeley. They had moved a few times in California in attempt “to get away from city life,” but finally they answered a for-sale ad in the San Francisco Chronicle for a 160-acre homestead in Oregon. Steve, Carol and the four children had never been out here on the Oregon Coastal Range, but the family bought the forested farm sight unseen.

“It was part of the original Homestead Act. There at the spring in concrete I found his name, Elihu Buck, crudely written with a finger. It had the first telephone line in the valley. The old posts were still there.”

This is an idyllic life until the four children are sprayed. Then the court battles, the scientific investigations (and backtracking and cover-ups) of the real effects of these herbicides. We are talking about neighbors throughout the area, up to a mile away from each other, collectively having multiple miscarriages, children born with genetic defects, adults suffering cancers and other ailments.

The dedication in her non-fiction book is emblematic of the struggle Carol has undergone:

For my children, Daphne, Alexey, Jarvis and Benjamin Van Strum.

I asked her what gives her hope.

The death of our children left me with what they loved — this farm, this dirt, these trees, this river, these birds, fish, newts, deer, and fishers — to protect and hold dear. These became my anchor to windward, keeping me from just drifting away with every wind that blows.

Even that tragic story isn’t simple — there is evidence the four children, old enough to babysit each other, perished in a house while Carol was next door at a neighbor’s house. The fire marshal indicated it was suspicious, potentially the result of arson. Carol has her suspects.

All the legal wranglings have reinforced my chronic intolerance of lies. Ditto the never-ending battle against poisons — that is an industry that could not exist without lying about its products; therefore, it should not exist.

Carol’s life on many levels, including her work to prevent chemicals entering into our watershed, as well as her personal physical and spiritual peaks and valleys, could be made into a movie. I asked Carol what she gathers from these trials and tribulations.

One person can’t save the world, or even see the other side of it. When I was four years old, I set out to see the world — thinking it was a special place like the World’s Fair with carousels and Ferris wheels. After the cops found me asleep in a pile of leaves by the street, my mom asked why I had run away. I told her I didn’t run, I walked, because I wanted to see the world, and she laughed and said, ‘It’s been right here all the time — the world begins at home.’ Lessons you never forget. I can’t save the world but I’ll fight tooth and nail to save this little corner of it.

Readers of my work might be surprised at the level of inquiry and seriousness of some of the stories I write, especially in a magazine dedicated to people enjoying our coast’s amenities and landscape (originally published in Oregon Coast Today). However, it does take a village to raise a family, and it also takes individuals and groups in a community to make it safe for everyone.

Carol might be impugned as being a “character,” but residents and tourists alike must respect that we in small rural and coast communities make up the fabric of how the place ticks and where the history is both created and memorialized.

A popular Government, without popular information, or the means of acquiring it, is but a Prologue to a Farce or a Tragedy; or perhaps both. Knowledge will forever govern ignorance: And a people who mean to be their own Governors, must arm themselves with the power which knowledge gives. — James Madison, 1822, cited by William Douglas in EPA v. Mink, 1974 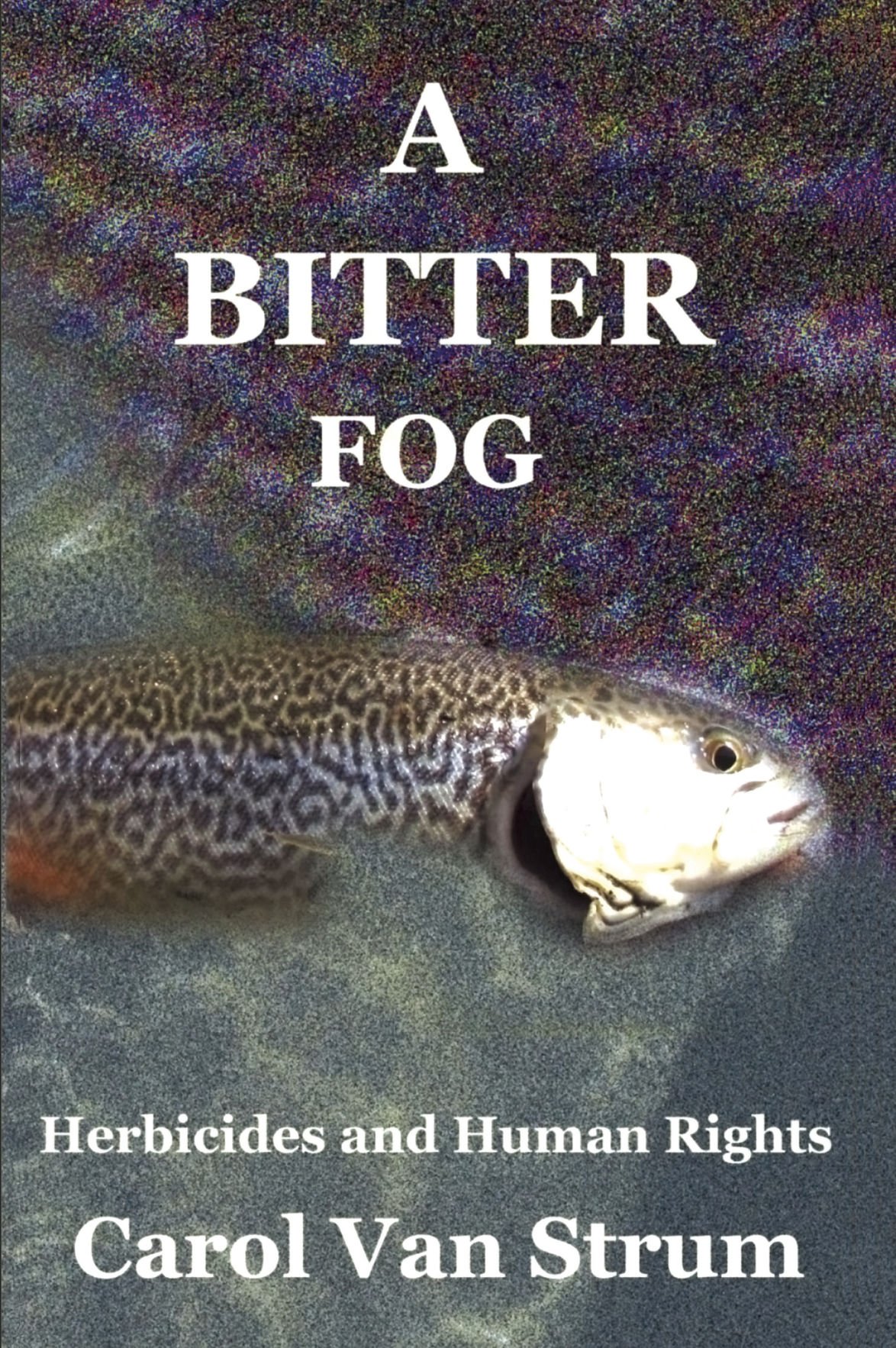 This article was posted on Sunday, March 15th, 2020 at 8:00am and is filed under Conspiracy Theories, Deforestation, Ecocide, Ecology, Ecosystems, Environment, Murder, Pesticides, The Commons, Water.