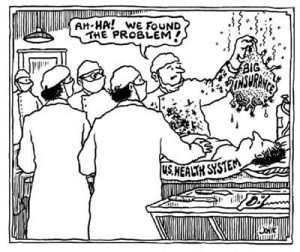 One of the slogans I learned in an earlier, albeit brief, phase of my life was called the 5 Ps: “Prior planning prevents poor performance.”

While it is true that planning, which by definition is somehow prior, can improve performance of any task, like all such slogans there is much tautology. Planning can define performance in such a way that it cannot be “poor.” On the other hand, performance can be judged “poor” simply because it does not conform to the plan.

In the discussions I have had or read about the current unpleasantness, there are many implicit controversies over planning and performance. For example, based on the assumption that the organisational skills of the CCP/PRC are solid, if not extraordinary, then one could say that the current conditions with respect to the so-called novel corona virus are the result of good and above all rapid planning capability and superior performance. In contrast, the actions by governments in the West, or those governments dominated by the West, reflect poor planning and even more doubtful performance — considering especially that the number of people to be assisted through organised state and social action is incomparably SMALLER than in China. Already one could make the immediate argument that the virus has led to demonstrations that the century-long pretension of Western efficiency is simply — to use the fashion word of the season: fake! When it really comes to getting serious work done, the West is only expensive or miserly. Its only criteria are so-called financial performance indicators.

I have been reading corporate annual reports for the past twenty-odd years. These are filled with tortuous language intended to cloak the corporations’ activity in the euphemisms of economic models akin to the theology of high scholasticism in the European Middle Ages. The focus of economic (and social) planning, like the focus of big ticket scientific (and medical) research is on the development of internally consistent (tautological) models which can then be applied to discipline the organisations charged with managing the economy or human existence. The language — derived from these models — is highly resistant to what ordinary human beings call “daily life.” For example, while the clergy in corporate accounting departments, finance ministries, and the Bretton Woods curia swoon over imagined economic growth in single digits or statistically concocted unemployment and wage figures, the reality of drastic purchasing power decline since the 1970s is dismissed as popular superstition. Although the official announcements when the euro was introduced; e.g., exchanged for the German mark, published the exchange rate by which the translation was to occur — in the case of the German mark it was DM 2 to EUR 1 — the fact that a one DM litre of milk was priced EUR 1 after the changeover was not acknowledged as a 100% price increase! Subsequent official statements insisted that overall prices might have increased slightly due to inflation but there was no admission of the obvious: at one stroke wages were halved and prices were doubled. That just was not part of the economic model for those who designed this covert currency reform (devaluation). The same can be said of what passes for healthcare and public health policy.

When the first coffins began to return containing US soldiers killed in imperial wars of the 1990s, the US regime quickly prohibited any photographing of these real indicators that the US was waging war and ordinary soldiers were being killed (often enough by their mates or committing suicide). The long-term result has been “no coffins, no dead” hence “no dead, no war.” This has meant that the US perpetual war against everyone (except maybe the British who are “part of the team”) has ceased to exist, except in the form of a budgetary model or a strategic battle plan.

The same can be said for public health policy. The existence of highly profitable corporations assigned statistically to the healthcare industry is easily represented as an indicator that there is a successful public healthcare policy. It is also claimed in the US that because not only its weapons expenditure is the highest in the world but also its healthcare expense that this means the US has the best healthcare. In fact, it only means that it has the most expensive medical services. The debate conducted under Mr Trump’s predecessor was presented as one over the merits of universal health care v. health care for those who can pay. It is a testimony to the deception in this debate that the law passed under Barack Obama is attacked for extending healthcare to the undeserving and praised as an incremental step toward equity in healthcare in the US. The legislation was neither — it merely extended the mandatory market for the cash stuffed private health insurance sector, generating more premium income without any guarantee of more actual healthcare service. There was also no challenge to the obscene pricing structure, which deprives the vast majority of affordable healthcare — despite what many supporters of the legislation claim. On the ground, the insurance industry benefited while the actual supply of medical treatment in any form was not appreciably improved, either in quality or price. Yet it is the model of the industry, not the reality, which counts and the model is a balance sheet and not a bed sheet.

In the US where public health policy has always been linked to policing non-whites, the concept of saving lives or preserving health has never been a priority. At best the policy has been one of protecting “whites” from contamination by inferior people. The poor and minority populations have often been used for testing under colour of public health measures that was condemned as crime against humanity in another country. The complement to this policy has included pollution of those segregated residential areas by collusive zoning enforcement permitting the location of unregulated toxic or polluting industrial plant in places inhabited by the poor, especially non-whites.

Now in what is more properly termed an epidemic-like environment, the acrimony of debate can only be enhanced. The current POTUS has no more to say in the creation of this “corona” problem than any other head of government/state in the West. At a W**** House press conference, Mr Trump recently said to China, “They know where it came from. We all know where it came from.” The statement is revealing. Beyond the redundancy of the official media, many people outside the US believe that the origin of the virus is the US and not China. By now Mr Trump will probably have been made aware of this fact even if the mechanics of the operation are not part of the “need to know” which governs how much the POTUS is told about any operation taken by the US regime’s operational forces.

However, knowledge of the origin will not solve any of the problems the West has with its own cannibalised infrastructure, reduced solely to the ability to move military and money. NATO, the church militant, is the outward and visible form by which the US Empire exerts control over its means of “salvation,” the flow of money. This was never more prosaic than when Paul Bremer, as US colonial administrator in Iraq, admitted to the US Congress a loss of USD 9 billion — because he did not consider it his job to count money while he was in Baghdad. Pallets of US currency, Federal Reserve Notes in bundles of hundred dollar bills, were unloaded from military transport planes and disappeared. No economic model was needed to explain that. Just this week at least USD 4,000,000,000,000 was printed or generated electronically by the Federal Reserve for the delectation of the leading finance corporations in the US.

In Germany, it has been reported that a US investor offered a substantial sum to a pharmaceutical laboratory for exclusive rights to a potential corona treatment — only to be sold to the US. So while there is more money generated in a day than the annual budgets of most countries in the world, the US has not withdrawn any of its exposed and potentially contagious soldiers from around the world — to protect global health. Nearly 20,000 were to participate in an anti-Russia manoeuvre in the NATO heartland called Defender 2020. The capacity to kill is still far more important than the ability to heal or prevent illness.

This article was posted on Monday, March 16th, 2020 at 2:45pm and is filed under Capitalism, Corporate Globalization, Economy/Economics, Opinion.