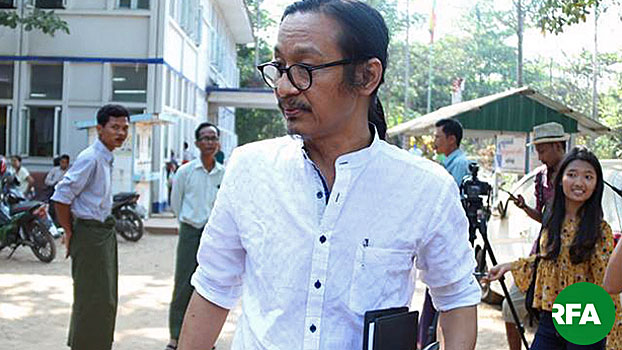 A Myanmar court on Monday accepted a criminal defamation case against an editor nearly a year after the government military filed a lawsuit over the publication of online memoirs about the armed conflict in war-torn Rakhine state.

Lieutenant Colonel Zaw Min Tun of the Yangon Region Command originally filed the case against Ye Ni and the online journal The Irrawaddy in April 2019 on behalf of a military commander, who argued that reporting in the memoirs was one-sided and cast the army in a bad light.

During the past year, legal officials and police in Yangon, where the lawsuit was filed, worked on the case to determine if the filing of the charge under Section Article 66(d) was valid, The Irrawaddy said in a report Monday.

On Monday, the Kyauktada Township Court accepted the case and granted bail to Ye Ni, editor of The Irrawaddy’s Burmese version, requiring him to pay 10 million kyats (U.S. $6,239).

Ye Ni has been charged under Section 66(d) of Myanmar’s 2013 Telecommunications Law, which prohibits the use of the telecom network to defame people and carries a maximum two-year prison sentence.

The editor said he was surprised that the military renewed charges it filed nearly a year ago over reports on the fighting between government forces and the rebel Arakan Army (AA) in Rakhine’s Mrauk-U township.

“I am surprised. I was charged around the same time as filmmaker Min Htin Ko Ko Gyi and members of the Peacock Generation group. Their cases are over now,” he said.

“I really want to know why they have renewed the old case [against me],” he said.

A Myanmar court sentenced prominent filmmaker Min Htin Ko Ko Gyi to one year in prison in August 2018 on criminal defamation charges for expressing his views critical of Myanmar’s military in Facebook posts. He has since been released.

Members of a traditional satirical group called the Peacock Generation also received prison sentences  for mocking the military in performances in 2019.

“Journalists are doing their jobs, but the authorities have different views, so they prosecute them using whatever charges they can,” said Than Zaw Aung, an attorney working on the case.

Citing the article titled “A Reporter’s Memoirs in Mrauk-U” by former Irrawaddy reporter Moe Myint that was published in April 2019, Than Zaw Aung said the military filed charges because the story was misleading and could have damaged relations between the army and the public.

The military has called the article one-sided because it failed to include comments from army spokesmen or other military officers.

The Irrawaddy has been covering fighting between the Myanmar military and the AA since hostilities intensified in Rakhine state in late 2018.