As states scrambled to conduct primary elections this week while discouraging citizens from gathering in large groups in response to the coronavirus pandemic, Senate Democrats and election experts pressed Congress to act immediately on legislation to ensure that voters in all 50 states will be able to cast ballots by mail or vote early in the general election if the public health emergency lasts into November.

That is particularly urgent because, as Marc Elias, a lawyer who represents the Democratic Party on voting rights issues, explains, while states can set their own primary days, “the federal general election is set by federal statute as the the Tuesday following the first Monday in November. This date cannot be changed by a state nor by the President.”

Democratic senators Ron Wyden, of Oregon, and Amy Klobuchar, of Minnesota, introduced legislation on Monday that would require all states to offer an option for voters to mail in or drop off hand-marked paper ballots if 25 percent of the states have declared a state of emergency related to an infectious disease, like Covid-19, or a natural disaster.

“The pandemic could hit like a tsunami,” Wyden told The Intercept by phone from his home in Portland. “How can we tell people, particularly elderly veterans, that they have to choose between their health and their vote?”

Since he’s taking advantage of #VoteByMail himself, I hope Donald Trump would commit to signing my bill into law to help states implement vote by mail through November to keep every American safe. https://t.co/ClEfmnhhL4

Even if the spread of Covid-19 slows in the coming months, previous pandemics, like the global outbreak of influenza that killed about 50 million people in 1918 and 1919, have struck in waves. As a CDC timeline for that pandemic’s impact on the United Kingdom shows, it struck first in the summer of 1918, and then receded, only to return with increased virulence in October and November. 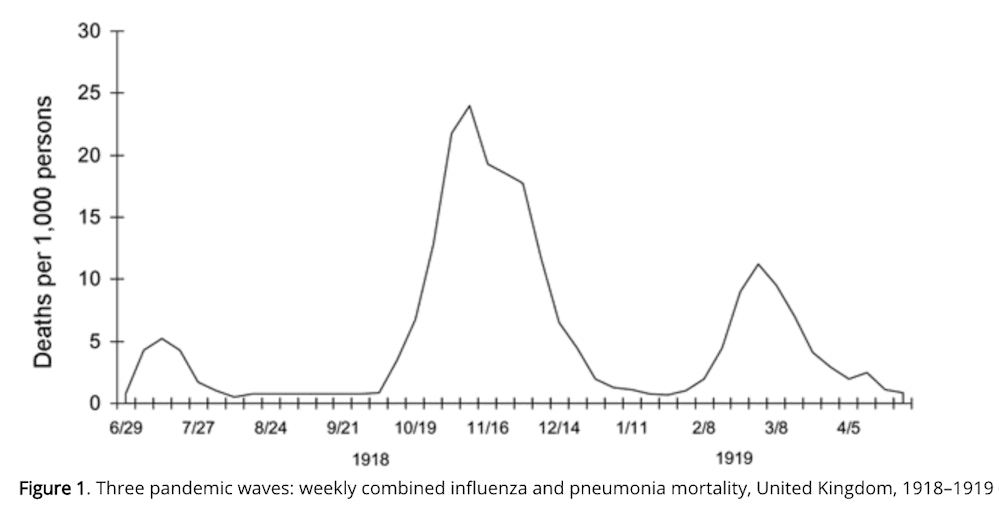 A timeline of the influenza pandemic of 1918-1919 in the United Kingdom, from a CDC study.

If enacted, the new law would force 16 states that still have restrictions on who can request an absentee ballot to remove them. Wyden’s home state of Oregon has conducted general elections entirely by mail since 2000, when turnout spiked to 79 percent.

“In about two-thirds of the states, there already is no-excuse absentee balloting,” election-law expert Rick Hasen pointed out in a Skype interview on Monday. Hasen, a professor of law and political science at the University of California, Irvine, and the author of the new book, “Election Meltdown,” noted that expanding such voting to the whole country would cost money and likely delay the counting of votes well beyond election night.

Wyden and Klobuchar’s bill includes $500 million in federal funding to cover the cost of providing prepaid envelopes to voters and to for states to purchase high-speed scanners to quickly count tens of millions of absentee ballots.

A provision would also bar any of the money from being used for internet-based voting, which experts say is insecure and Wyden argues would aid further Russian interference in the election. The senator noted that the nation’s top voting machine maker, Election Systems and Software, had already admitted to him in 2018 that it lied about securing its machines from hacking by making sure that they were never connected to the internet.

While Wyden is a proponent of having votes cast entirely by mail, or dropped off in locked collection bins close to election day, the system Oregon has operated for years, Hasen argues that in-person early voting should be part of the package.

“I tend to favor in-person absentee balloting because it’s more secure,” Hasen said. “When you have ballots floating around out there, there’s the potential for ballot-tampering — as we saw in the North Carolina 9th Congressional district race in 2018, where you had political operatives taking ballots and potentially destroying them or changing them.”

“We need to have safeguards about that,” Hasen added, “but we need also to make sure that we need to have procedures in place for people who don’t have easy access to the mail, like people who live on Indian reservations, to make sure their ballots can be distributed and collected. It’s complicated and so now is the time to be planning for November. We can’t wait until September or October to try to roll something out.

In a Washington Post opinion article, Marc Elias argued that “all votes postmarked by Election Day must be treated as timely and counted in full.” If the pandemic forces nationwide voting by mail, Elias wrote, postal facilities, already dealing with the impact of Covid-19 on their own workforces, will have to handle millions of ballots. That will likely mean delays in mail delivery times, which should not disqualify votes cast by election day.

Dale Ho, the director of the A.C.L.U.’s Voting Rights Project, wrote in The New York Times that if vote by mail becomes necessary, “voters must also be notified of any defects in their ballots, such as signature problems, and be given an opportunity to fix them.”

“Numerous states have not provided such opportunities,” Ho added, “which has led my organization and others to bring numerous successful lawsuits on this issue in recent years (in states including California, Georgia and New Hampshire). Ballots should not be discarded before voters are given a chance to address any problems and make sure that their votes are counted.”

Hasen also echoes Wyden’s concern about proposals for internet voting. “I think the consensus among computer scientists is that internet-based voting is a bad idea: it’s not secure,” Hasen said. “And beyond the question of the actual security, there’s the question of public confidence in the process,” he added. “When you don’t have a piece of paper that can be checked, I think people are concerned that there could be hacking somehow changing the votes. You even see it now when we don’t have internet-based voting, that people are concerned about voting machines. This is why I suggest that we always need a paper trail, something that can be counted in the event that there is a concern.”

“Internet voting is not ready for prime time,” Hasen said. “It’s hard to think of a worse idea than internet voting to roll out for the first time in what might be the most contentious presidential race of our lifetimes.”

Absentee ballots, by contrast, are hand-marked on paper “and can be recounted by hand if necessary,” Hasen said. “People voting with an absentee ballot, its on a piece of paper, they’ve hand-marked it, which I think of as the gold standard.

Hasen generally favors Wyden’s proposed legislation, but argues that it needs to include protections for voters. “For example, the ability of voters to get notice if their ballot is rejected because signatures don’t match, so they have a chance to cure that,” he said.

“I want to see limits on the ability to collect absentee ballots from strangers, which is something that I know some Democrats oppose, but I think it’s important as a security measure and as a confidence measure,” he added. “I think there would need to be some exceptions in there for places where you have large rural areas without good mail service, but generally speaking I would favor some limits — like in Colorado, where a person can collect up to 10 absentee ballots and return them, which seems reasonable.”