During the 2019 State of the Union Address United States president Donald Trump promised, “America will never be a socialist country.” This was followed by GOP chants of “USA, USA, USA.”

Donald Trump affirmed his antipathy of socialism during the 2020 State of the Union Address stating, “Socialism destroys nations.” This was followed by applause from the politicians present.

Apparently being totally in the dark about the contagiousness of COVID-19, Trump also promised during the 2020 SOTU: “To those watching at home tonight, I want you to know: We will never let socialism destroy American health care.”

When the specter of COVID-19 appeared to threaten the US, Trump called the coronavirus the “new hoax” of the Democrats.

His insouciant response reflected earlier pronoucements on COVID-19. Of the first cases of COVID-19 reported in the US, he said, “We’re going to be pretty soon at only five people.” Trump added, “And we could be at just one or two people over the next short period of time. So we’ve had very good luck.”

A day later, Trump said, “It’s going to disappear. One day — it’s like a miracle — it will disappear.”

One wonders whether whether Trump was appealing to a celestial, a non-scientific entity, or the god of Mammon for divine intercession.

Then came Trump’s flip flop; in a tweet he belied his earlier allegation of Covid-19 as a Democratic hoax:

I always treated the Chinese Virus very seriously, and have done a very good job from the beginning, including my very early decision to close the “borders” from China – against the wishes of almost all. Many lives were saved. The Fake News new narrative is disgraceful & false!

Trump’s unrestrained penchant for pointing to race and ethnicity and his utter lack of diplomatic decorum was exhibited by his blaming China.

Others have constructed another possible transmission vector with the US as the source.

It is a fact that Fort Detrick, a US Army biological lab was forced to shut down over safety concerns in August 2019.

In August 2019, the appearance of “mysterious” respiratory illnesses were reported in the US, yet regarded as “potential[ly] vaping-related.”

Subsequent events caused the launch of a petition asking the US government to “publish the real reason” for the lab’s shut down, whether there was a virus leak, and whether the lab worked with the novel coronavirus.

The Chinese online site of the People’s Daily called attention to the curious sequence noted in the petition leading up to the outbreak of COVID-19,

The petition listed a series of conspicuous events in chronological order, showing unexplainable lab-related issues and a possible link between the lab and the coronavirus. For example, the pneumonia of undetermined origin was found in China in November 2019 right after the United States organized Event 201, a global pandemic exercise, with the participation of the Deputy Director of the CIA in October.

On 12 March 2020, Robert Redfield, director of Centers for Disease Control and Prevention admitted that autopsies revealed some COVID-19 deaths were misdiagnosed as the flu.

Chinese media reported in January 2020 about five foreign athletes who had been hospitalized in Wuhan Jinyintan Hospital for infectious disease.

American voices — as they are wont to do — will cry “conspiracy theory.” They will accuse China and its allies Russia and Iran of disinformation over COVID-19.

One might be a bit taken aback by the US pointing to the foul of disinformation. At the risk of being cheeky, but would that be like the disinformation of phantom missiles in the Gulf of Tonkin? Like Operation Northwoods? Like the non-existent WMD in Iraq? Like the Downing Street memo that had intelligence and facts fixed around the policy? Like the false flag of a Syrian government chemical weapons attack? The list goes on and on.

And what would this imply about “us” being fooled more than once by the same actor?

An analysis of genotype assays of COVID-19 revealed five variants/strains (group ABCDE) of the virus. Most regions in the world have 1-2 COVID-19 variants including Hubei (mainly group C), and UK (Group B). The US is the only country with all 5 variants (Group ABCDE). It is postulated that the region with the most variants must be the origin of the disease.

If SARS-CoV-2 is from bats and the transmission vector to humans was unpredictable and unpreventable, then the source of COVID-19 can be dropped from any blame game. Obviously then, the focus should be on treatment, recovery, and preventing further spread of the disease. What is relevant, however, is whether the transmission of was the result of human intervention. At present, all this is speculation until irrefutable evidence is presented.

Vox compared US rates of COVID-19 to other countries and noted,

As of March 19, the Johns Hopkins research data shows more than 222,000 confirmed cases worldwide, about 8,000 of which are in the US. The actual number of cases is likely much higher. More than 9,000 people have died across the world from Covid-19, including about 150 in the United States.

As you can see, the confirmed cases in the US are already more in line with Iran and Italy than with places like Hong Kong and Singapore, where the governments mobilized more quickly. 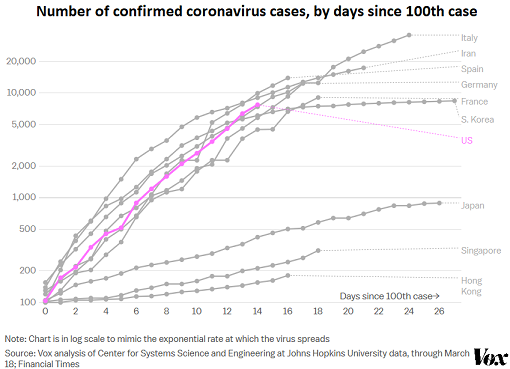 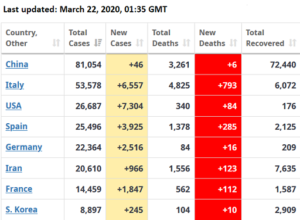 Bearing out the prognostication in the Vox article, is data on Confirmed Cases and Deaths by Country, Territory, or Conveyance of COVID-19 that unfortunately indicates a definitive upsurge in the number of COVID-19 cases in the USA: 7,304 new cases.

A Natural Experiment Has Been Initiated: Socialism vs Capitalism

Wei Ling Chua in his book Democracy: What the West Can Learn from China (2013) compares and contrasts the effectiveness of political systems applying scientific rigor. Arguably, how well a government protects the safety, security, and health of the people as well as creating economic opportunities that fairly distribute the wealth provides a measure to gauge the efficacy of governance. Chua saw the occurrence of a disaster as presenting an unfortunate circumstance by which the response of a government could be assessed in meeting the needs of the citizenry.

COVID-19 is a circumstance that enables comparison of governments and their economic systems in response to the same pandemic.

This is not a question solely concerned with numbers and deaths; each case of COVID-19 is an unfortunate occurrence. Particularly important is the response of governments to protect the people and provide for the needs of the people. In the present circumstances, it appears that American politicians and corporate types are setting aside their avowed distaste for socialism (but let’s be clear, corporations have always welcomed government money to bolster their bottom lines, and socialism is deeply entrenched in the US, to wit, education, fire fighting, police, the military, transportation, etc).

Trump who eschews socialism is taking aggressive measures to tackle the COVID-19 epidemic through big-government intervention. Trump has come up with a $1 trillion economic stimulus proposal: half to individuals and half to businesses. The big difference between the Trump bailout and the $700 billion Obama bailout of Wall Street, beside the amount, was that individuals would also be recipients of money! Trump’s bailout is not just corporate socialism.

Nonetheless, the self-professed anti-socialist Trump is not leaving citizens and businesses exposed to the vagary of free-market capitalism.

China’s hand is not just extended to its own citizens during the pandemic. It is helping other countries. During the current COVID-19 epidemic, at least 15 countries have benefitted from Chinese medical aid, though cynical detractors will impugn Chinese altruism. Contrariwise the Intercept ran an article titled “As the U.S. Blames China for the Coronavirus Pandemic, the Rest of the World Asks China for Help” describing how China has stepped into the shoes of a leading nation.

Western Europe and the U.S. are struggling under the weight of the crisis, with cases rising exponentially every day and higher death rates in Italy than anywhere else. China’s private and public sectors are filling in gaps in equipment where other states are failing, although the spread of the disease is such that demand for those materials might quickly outpace China’s supply. The government and Jack Ma, a Chinese billionaire and co-founder of the Alibaba Group, have already sent doctors and medical supplies to France, Spain, Italy, Belgium, Iran, Iraq, the Philippines, and the United States. Chinese citizens living abroad are flying home in large numbers to avoid catastrophic health failures elsewhere. In Massachusetts, a Chinese woman tried and failed to be tested three times for Covid-19 before flying back home to be tested and treated.

While the two business parties in the US, abetted by the corporate media, compete to prevent medicare for all, to reduce social security, and inject obscene amounts of cash into the military-industrial complex, China pursues a different track. Starkly distinguishing itself from the US in terms of national priority is China’s dedication to eliminate absolute poverty by 2020.

Despite the COVID-19 pandemic, China remains committed to eradicate poverty in 2020.

China does not seek a pretext to avoid attaining its admirable goal.

Now just imagine if the US, Canada, UK, or Germany were to announce a solemn pledge to eliminate extreme poverty any time soon… why, horrors, that would be socialism! Sarcasm aside, imagine socialism eliminating homelesness, no people living under bridges; eliminating hunger, no people scouring garbage containers in search of food; eliminating destitution, no beggars sitting on sidewalks with cardboard signs appealing for help. Wouldn’t that point to a system of governance worthy of praise?