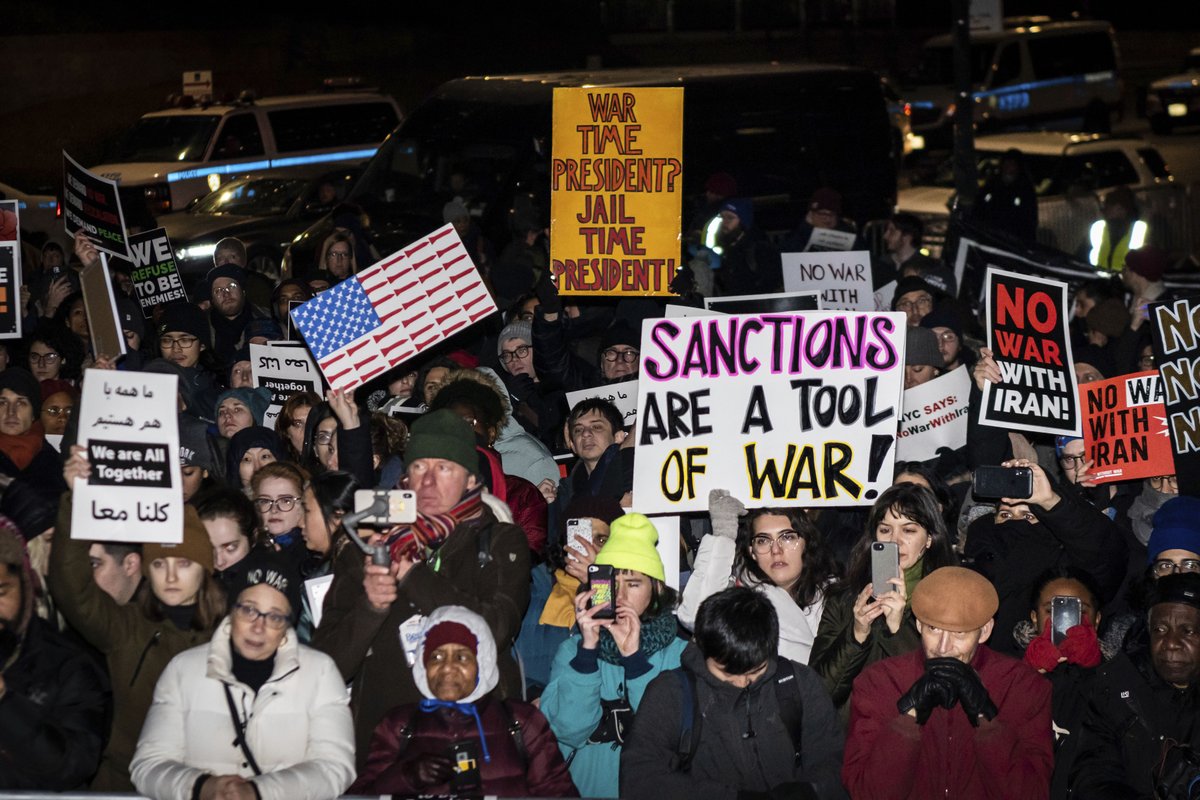 During the United States’ 1991 “Desert Storm” war against Iraq, I was part of the Gulf Peace Team—at first, living in a “peace camp” set up near the Iraq-Saudi border. We found an abandoned typewriter, attached a lit candle so that we could see (the United States had destroyed Iraq’s electrical stations, and most of the hotel rooms were pitch black), and, in lieu of a typewriter ribbon, placed a sheet of red carbon paper over our stationery.

Iraqi authorities, lacking a functioning typewriter of their own, asked us to type their letter to Javier Pérez de Cuéllar, the secretary-general of the United Nations, imploring him to prevent the United States from bombing a road between Iraq and Jordan, the only way out for refugees and the only way in for humanitarian relief.

Now, in 2020, Iraqis still suffering from impoverishment, displacement, and war earnestly want the United States to practice  “physical distance” and leave their country.

Meanwhile, U.S. sanctions against Iran, which the Trump Administration has cruelly strengthened, continue to collectively punish extremely vulnerable people. The United States’ current “maximum pressure” policy severely undermines Iranian efforts to cope with the ravages of COVID-19, causing hardship and tragedy while contributing to the global spread of the disease.

Efforts by the Iranian government to address the crisis have included releasing 85,000 nonviolent prisoners from overcrowded prisons. Yet the Iranian government didn’t impose radical restrictions that would have prevented hundreds of thousands of people from traveling and congregating to celebrate Nowruz, the Persian New Year on March 20.

Why has the Iranian government, in spite of a rising death toll, been reluctant to impose compulsory quarantines? The Guardian newspaper suggests the government is so strapped  financially that it can’t afford to make welfare payments to low-income workers, and it must continue to keep them employed. The United States bears direct responsibility for enforcing Iran’s economic decline.

Oil sales constitute 70 percent of Iran’s revenues. Since May 2018, the United States has strong-armed Europe, South Korea, India, Japan, and other countries into refraining from purchasing Iranian oil. Iran’s oil sales tumbled from 2.5 million barrels per day in 2017 to a few hundred thousand in recent months. By interfering with Iran’s shipping, insurance, financial, and banking systems, the United States has severely restricted Iran’s capacity to obtain desperately needed medicines and supplies.

Regionally, Iran is surrounded by dozens of U.S. military bases scattered across countries including Afghanistan, Kuwait, Iraq, Turkey, and the United Arab Emirates. Yet Iran poses no direct threat to the United States, with its vastly superior weapons arsenal and unrivaled military superiority.

The United States accuses Iran of meddling in the affairs of other countries, supplying weapons and training to Yemen’s Houthi rebels battling against Saudi Arabia, and bolstering Hezbollah and Hamas in their fight against Israel. But the United States also meddles, as evidenced by the invasion and occupation of neighboring Iraq and Afghanistan, and its interventions in Libya and Syria.

Now, Iran’s devastated economy and worsening coronavirus outbreak is driving migrants and refugees back to Afghanistan at dramatically increased rates. In a two-week period in March alone, more than 50,000 Afghans returned from Iran, increasing the likelihood that cases of COVID-19 will surge in Afghanistan. Decades of war, including the U.S. invasion and occupation since October 2001, have decimated Afghanistan’s health care and food distribution systems.

Iranian Foreign Minister Javad Zarif, in his letter to U.N. Secretary-General Guterres, accused the United States of crimes against humanity and demanded that the U.S. government “abandon its malign and fruitless approach against Iran.”

Are we now living in a watershed time? A new, unstoppable, deadly virus ignores all borders, including those the United States tries to reinforce or redraw. The U.S. military-industrial complex, with its massive arsenals and cruel capacity for siege, is no longer relevant to “security” needs.

One way to improve survival is to insist that the United States lift sanctions against Iran and instead support acts of practical care.

Why should the United States, at this crucial juncture, approach other countries with threats and seek to preserve global inequities? Such arrogance doesn’t ensure security for even the U.S. military. If the United States further isolates and batters Iran, conditions will worsen in Afghanistan, and U.S. troops stationed there will ultimately be at risk. The simple observation, “We are all part of one another,” becomes acutely evident.

It’s perhaps helpful to revisit guidance from those who faced wars and pandemics in the past. The influenza pandemic that ravaged the world beginning in 1918 killed an estimated fifty million people worldwide, including 675,000 in the United States alone.

Thousands of nurses were on the “front lines,” delivering health care. Among them were black nurses who not only risked their lives to practice works of mercy but also fought discrimination and racism in their determination to serve. These brave women arduously paved the way for the first eighteen black nurses to serve in the Army Nurse Corps, and they provided “a small turning point in the continuing movement for health equity.”

It also may be helpful to learn from health care professionals who are right now caring for people in the world’s poorest places.

Writing in mid-March, from a rural village in Tamil Nadu, India, three doctors explained how “public health advisories that have been released in the past few weeks” were geared toward urban residents in the upper and middle classes. They described their encounter with a patient who showed symptoms of COVID-19 infection and advised that she and her daughter home isolate. But the daughter responded that this advice wasn’t practical.

“Our house is a little hut, and all four of us live in the same room,” she said. “We have enough room just to lie down and sleep. Keeping a one-meter distance is impossible. Three of us are women, and it is not safe for women to sleep outside the house. There is also the threat of scorpions and snakes outside.”

When advised to at least keep her mother home until she was well, the daughter explained that “rain or shine, sick or healthy, my mother must go out to graze the goats.”

“At the end of this little conversation,” noted the doctors, “we understood how impractical social distancing is, for a vast majority of the poor population with whom we work.”

In a recent series of tweets, Jonathan Whittall, director of the analysis department for Médecins Sans Frontières (Doctors Without Borders), posed some agonizing questions:

As COVID-19 continues to spread, many people worldwide are evaluating the glaring, deadly inequalities in our societies. One way to improve survival is to insist that the United States lift sanctions against Iran and instead support acts of practical care. We must jointly confront the coronavirus while constructing a humane future for the world, without wasting time or resources on the continuation of brutal wars.