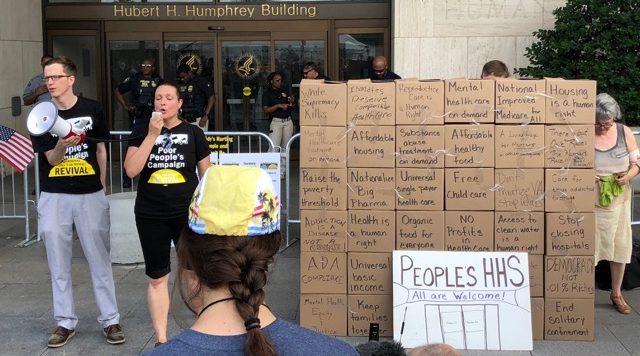 We’ve been writing for a while that the 2020’s would be a decade when multiple crises would come to a head and we would have an opportunity for major transformations if we were organized to mobilize and demand them. The current coronavirus pandemic, economic collapse, and falling oil prices are three events that are creating such opportunities. Each crisis shows the glaring shortcomings of healthcare, economic and environmental policies that are failing the people and planet. Nobody could have predicted that the crises would happen so quickly, but here we are.

Now, we must act on two levels. First, an immediate response to the pandemic that is rapidly infecting and hospitalizing people and could lead to more than one million deaths in the United States and to the global economic collapse triggered by the COVID-19 virus that is bringing the economy to a standstill with rapidly rising unemployment and resulting in a deep recession or even a depression. Second, we must make structural long-term changes to redesign our systems so that everyone’s basic needs are met, the planet is protected and we end gross inequality.

Response to the pandemic and economic collapse are already showing change is possible. As part of what may be nearly a $2 trillion stimulus, even Republicans are urging cash payments to most people in the form of a short-term universal income, providing businesses with financing so they do not go bankrupt, and the government taking an equity share of large industries that seek financial support. Prisons are releasing inmates, police are arresting fewer people, and evictions and water and power shutoffs are being stopped. It is our responsibility to push for what we need and to ensure these crises are not used to put harmful policies in place. 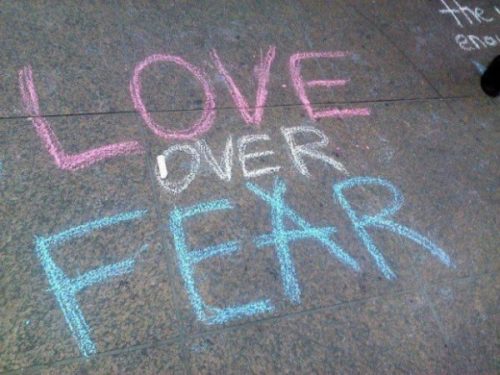 Single-payer healthcare systems are better equipped to respond to epidemics

Advocates for a universal single-payer healthcare system in the United States have warned for years that we are ill-equipped to handle a pandemic. The COVID-19 crisis is making it very clear that our healthcare system is failing us. We’ve also raised awareness that the United States has the highest number of preventable deaths compared to other wealthy nations, even though we spend the most on health care. Now that the epidemic can impact everyone, leaders are taking notice.

President Trump announced that testing for COVID-19 would be free. He also stated that there would be no co-pays for treatment but the insurance industry was quick to say they had not promised that. Politicians are pushing for our public health insurances, Medicaid and Medicare, to pick up out-of-pocket costs for care that would otherwise prevent people from seeking treatment.

Countries that have universal single-payer healthcare systems are handling the COVID-19 pandemic much better than the United States. They already have a system that offers free care and they have the authority and communications networks in place to rapidly deploy health professionals and resources to areas of need and to build healthcare infrastructure to meet the demand. We have a single-payer healthcare system in the United States, the Veterans Health Administration (VHA). Suzanne Gordon and Jasper Craven of the Veterans Healthcare Policy Institute write that:

Because the VHA is a highly coordinated system, agency staff have begun rejiggering its supply chain to get necessary equipment to hospitals in hardest hit areas, and have started setting up command centers to assist with this national emergency…. Already, VHA staff have embedded with the Centers for Disease Control and are largely running the country’s 65 emergency coordinating centers. The department has also deployed nurses to screen American soldiers coming home; built a website landing page to inform veterans of updates through the crisis; restricted non-essential hospital visits across the country; and instituted strong protective measures at their nursing homes, which are much better staffed and safer than their private sector counterparts.

This is possible because the VHA is a national system that is government-funded and not for profit. They already have a telemedicine infrastructure in place so people can receive ongoing care from their homes. Staff are salaried so they can easily shift to provide care where needed, unlike many private doctors who are only paid if they can bill insurance companies. Dr. Mike Pappas, who practices in New York City, reports that health professionals in the non-VHA healthcare system are facing critical shortages of tests, protective gear, medical equipment, and hospital beds.

The United States has been very slow to react to the crisis. HHS Secretary Alex Azar was informed about the COVID-19 virus on January 3. China only became aware of it in late December, and it was not until January 7 that Wuhan researchers determined a new virus was causing disease, so the US became aware almost immediately (One of the often-repeated lies of the Trump administration and US media is that China was secretive about the virus when in reality, the US was informed as China was still figuring out what was occurring). Not only did health officials know, but US intelligence reports from January and February warned about a likely pandemic. Yet, here we are in late March and we are still unsure how widely the virus has spread. 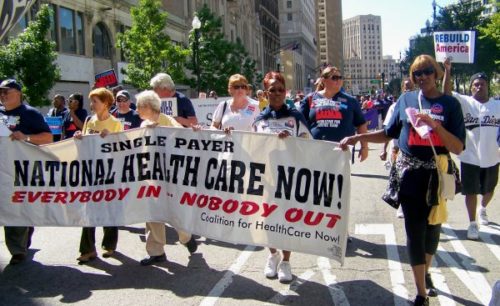 Our fragmented, unequal and for-profit system is the problem. The pandemic is illustrating that health is a national security issue. Healthcare doesn’t belong in the private sector where profit is the priority instead of health. Our for-profit system is resulting in the closing of 30 hospitals a year and the reconfiguring of community hospitals to be profit centers that specialize in care that brings in money rather than the general care communities need. This is why we lack sufficient beds to handle the pandemic and have to rely on people to self-isolate to slow the rise of infection in order to avoid overwhelming our system.

Our for-profit mentality when it comes to pharmaceuticals is also hurting our health. The US is spending a billion dollars to develop a COVID-19 vaccine. This should be made available for free to everyone in the United States; it should not be a profit center for a private corporation. The Journal of the American Medical Association reports that spending on prescription medications is higher in the US, per capita, than in any other country in the world. Drug companies are among the most profitable US corporations and spend more on marketing than research. Five out of the six highest profiting US companies were pharmaceuticals.

Lee Fang reports in The Intercept that price gouging is being encouraged by investors, writing, “Over the past few weeks, investment bankers have been candid on investor calls and during health care conferences about the opportunity to raise drug prices.” The Hill reports, “A CEO of a Georgia-based hospital on Wednesday said the supplier of a protective mask critical for health care workers treating COVID-19 patients is charging $7 for the masks that typically cost 58 cents.”  The US Public Interest Research Group  Education Fund said it is tracking prices of medical supplies and found a package of 320 Lysol disinfecting wipes that usually cost $13.57 were priced at $220. Another listing offered Purell sanitizer that normally sells for $7.99 priced as high as $49.95. Nearly one in six masks and hand sanitizers sold by the retailer saw their prices jump at least 50% in February.

This all shows a need for a publicly-financed, universal healthcare system in the United States such as national improved Medicare for all or a national health service modeled on the VHA. It also demonstrates the need to nationalize the pharmaceutical industry and control the prices of goods required for personal protection.  In Spain, the government seized control of private health care providers, including privately run hospitals, to manage the demand for treatment for patients with COVID-19.

In the immediate term, we need to do what other countries have done:

In the long term, we need to demand that we do not go backward. This includes creating a universal, publicly-funded healthcare system that is free at the point of service, nationalizing the pharmaceutical industry, building more healthcare infrastructure so all people have access to care within a reasonable distance, expanding and paying for medical education – especially for people in low-income communities, treating housing as a human right by converting existing empty homes and apartments into social housing and changing our legal system to minimize the use of prison as a punishment.

We can make the 2020’s a decade that completely transforms our healthcare, economic, and environmental systems and more. Now is the time to be bold in demanding what we need to uphold human rights and protect the planet. Many groups are putting forward demands for changes they need. We’re posting them on Popular Resistance. And we will continue writing about transformative changes to our economic and environmental policies in the next newsletter.

This article was posted on Wednesday, March 25th, 2020 at 10:07am and is filed under COVID-19 (coronavirus), Economy/Economics, Environment, Health/Medical, Medicare for All, United States.